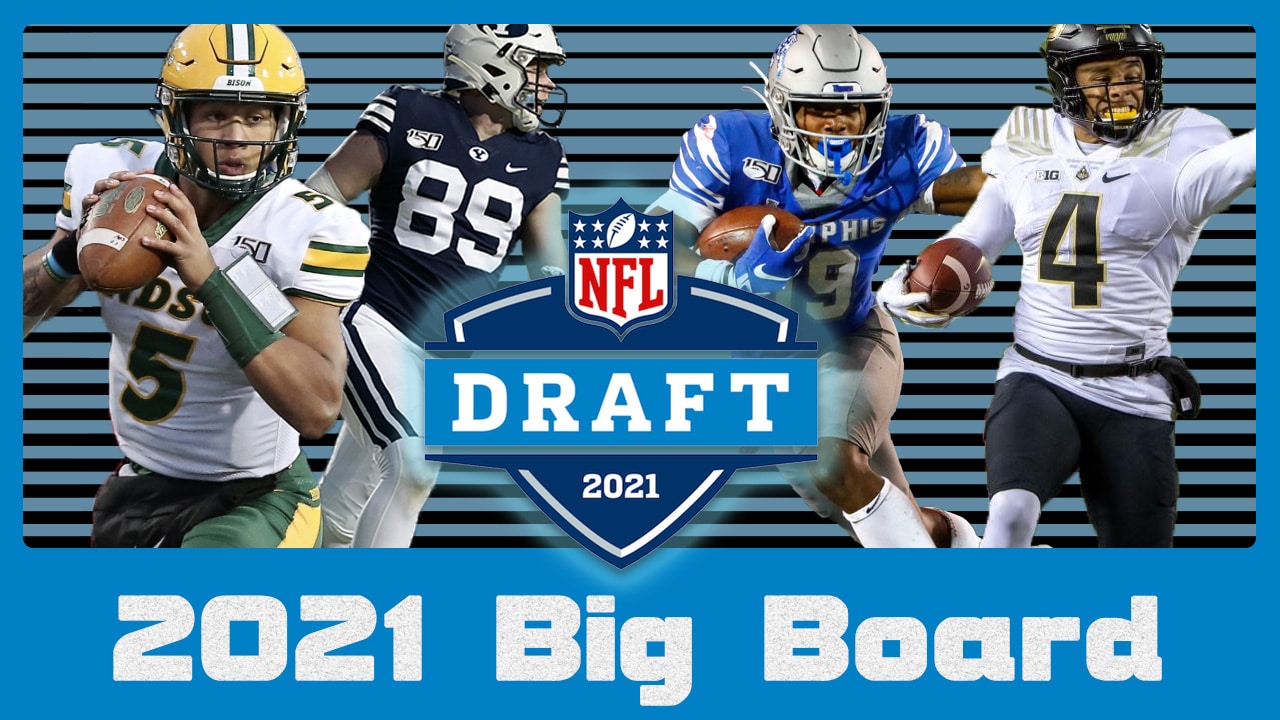 Welcome to my 2021 Fantasy Football Rookie Big Board. For some background, this is my 7th year dissecting and analyzing the NFL Draft. I do it from both the lens of real world implications, as well as for Fantasy Football purposes. I read the tea leaves of Draftniks, and what they hear being whispered behind the scenes. I consider all of the fantasy pundits, and the various metrics and algorithms factoring ‘break out ages’ and ‘dominator ratings’. I add my own personal feelings on what my eyes see. And of course, as the founder of an advanced statistical website, I incorporate the raw black and white data of what these prospects have produced in their careers. What you see below is my Overall Big Board accounting for the Fantasy Football relevant positions. In other words, just the offensive playmakers.

One thing that should remain constant, is to not be stagnant. Even if you have a refined model you trust and believe in, and has by and large worked, the game is constantly evolving. You must be able and willing to adapt, recognize you may be missing things, and try to account for those shortcomings. I have had great success in past drafts, as well as big failures. Everyone has. There is no 100% accuracy in this game. That is the only guarantee. This year, I decided to try a new model. One that incorporates a player’s stat line, plus their athletic testing, and adding in a film analysis grade. I think it could be beneficial to compare these numbers to past successes in the league, but at the same time, they are only going against themselves – not the past. So, I took all of these numbers and compared this class only against itself. You can find all of the data used in the 2021 XTB NFL Draft Guide, yet another reason you should purchase the guide.

There are varying opinions on ‘what makes a great player’ and what numbers we should concentrate most on. Some will argue that you should only look at certain years of a players résumé. I decided to account for his entire body of work. For the Statistical portion of my grading (vSTAT), I accumulated each players full stat line throughout their college career. I then used a fantasy multiplier of 1 point per 10 yards Rushing/Receiving, 1 point per 25 yards Passing, 6 points per Rushing/Receiving TD, 4 points per Passing TD, 1 point per Reception, and -2 points per Interception thrown. I then took each players total career points, and divided by games played to create a per game ‘Fantasy Points’ total. Because I didn’t feel every conference could be weighted equally, I averaged out each conference’s passing totals per team, to create a variable for where a player called home. The sum of these per game totals were then averaged out by each position. As an example, the xPer Game for Wide Receivers is 9.24 points per game. The next step was to create an additional multiplier to account for Competition level of each conference (see chart). Each player was then measured against their per game number to see how above or below average he was to his peers. Sticking with the Wide Receivers, Rondale Moore of Purdue scored the highest, with a 2.001 grade. This means he produced more than twice the average of this class. Ja’Marr Chase of LSU, who is largely considered the top receiver in this class, scored an impressive 1.392, and Heisman Trophy winner DeVonta Smith of Alabama measured in with a 1.420. This huge disparity was too big to ignore on what Moore actually contributes on the field on a per game basis. Thus, the vSTAT grade born. 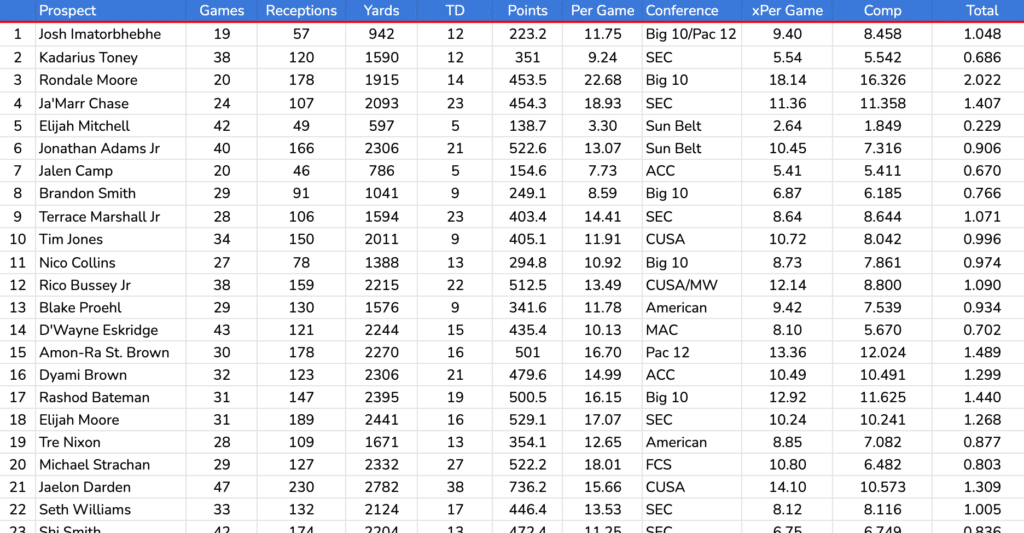 vCAT
Stands for ‘versus Class Athletic Testing‘. Similar to how the statistics were calculated, I wanted to see how players athletic scores compared to each other. I didn’t want to get into the weeds with height, weight, age, etc, so it was just a straight line measurement of four categories: 40 Yard Dash, Vertical Jump, Broad Jump, and 10 Yard Split. From most accounts in my experience, these are the core group of measurements factoring into a players quickness, burst, and speed. Yes, you can certainly make the case that strength and size matter. But, as just one factor in the total evaluation, how do these players compare when stacked against each other in just their pure athleticism. Again, each position was tallied for an average score of each of the categories, and then weighed against the class individually. With four categories, and 1.0 being the average, a score of 4.0 is the bar. Continuing with Wide Receivers as the example, Rondale Moore once again scored tops in the class with a 4.271 grade. Ja’Marr Chase was a close second at 4.266. There were a few players that didn’t participate in these tests, most notably DeVonta Smith and teammate Jaylen Waddle. For them, I had to make some assumptions, which was to assign them the average class grade. With those two in particular, I tweaked their scores closer to the top end of the average. This concept seemed to hold true amongst all of the positions, making me comfortable with vCAT as a viable measuring stick.

XTB Grade (Film Analysis)
In years past, I watched much more film, formulating my own opinions on players. What I found was that this leads to more biased based observations, either falling in or out of love with particular prospects. This year, I was buried behind the scenes working on getting the XTB Draft Guide together. It turned out to be a blessing in disguise, as my trusted team of scouts collectively watched over 10,000 hours of film, and jointly came up with grades for each player to comprise the guide. All of their review was film based, making their final grades on players ones I felt comfortable trusting as a score to apply for film analysis. Again, there are full scouting reports for 378 prospects at every position, all with 8 trait grades plus a final overall score. Seriously, if you don’t have the XTB Draft Guide yet, you are severely missing out!

Final Score
When tallying up the combination of vSTAT + vCAT + XTB Grade, I noticed the differences in the size of the numbers. The statistical grade was in the range of 0.5 to 2, the athletic grade was in the range of 3.7 to 4.2, and the film grade was in the range of 5.3 to 7. This firmly backed up what I felt mattered most, and was appropriate in what percentage of the total grade was most important. In order, Film mattered most, followed by Athleticism, and lastly College Production. The total grade at each position, albeit a couple of outliers, all lined up with what most consensus opinions say. Then, when I put all of the positions side by side, they too fell in line pretty well with each other. It also confirmed why I wanted to do things this way in the first place: to not be persuaded and dictated into a stance based on opinions. What does the raw data say? Am I missing something that should be more obvious? Is Sage Surratt really the 5th best Wide Receiver in this class? Do any of us really have that answer at this point in time? My personal opinions include Trey Lance as QB2, Javonte Williams as RB1, and Terrace Marshall, Jr as WR5. But again, I did this to try to be as uninfluenced as possible. There is obvious room for debate, but I think the exercise is also quite revealing. You be the judge.

I have also worked on a measurement to add in a grade for Landing Spot/Opportunity. There will be an update to this 2021 Fantasy Football Rookie Big Board once the draft is complete, and we know where players end up starting their professional careers. Until then, enjoy the remaining week of Draft SZN!

ps – have you seen my 1st RoundMock Draft yet? The final version is here

A jack of all trades in the Fantasy Sports industry, covering football, baseball, and the NFL Draft. Has written, edited, podcasted, and produced over 1,000 videos for his various series, in addition to dozens of guest appearances and collaborative pieces. A top ranker on Fantasy Pros for both Football & Baseball, avid fan of mining for MLB prospects, and former D1 College hoops player, Andy is a native New Yorker, who has served as a firefighter in the FDNY for the past 20 years and counting.