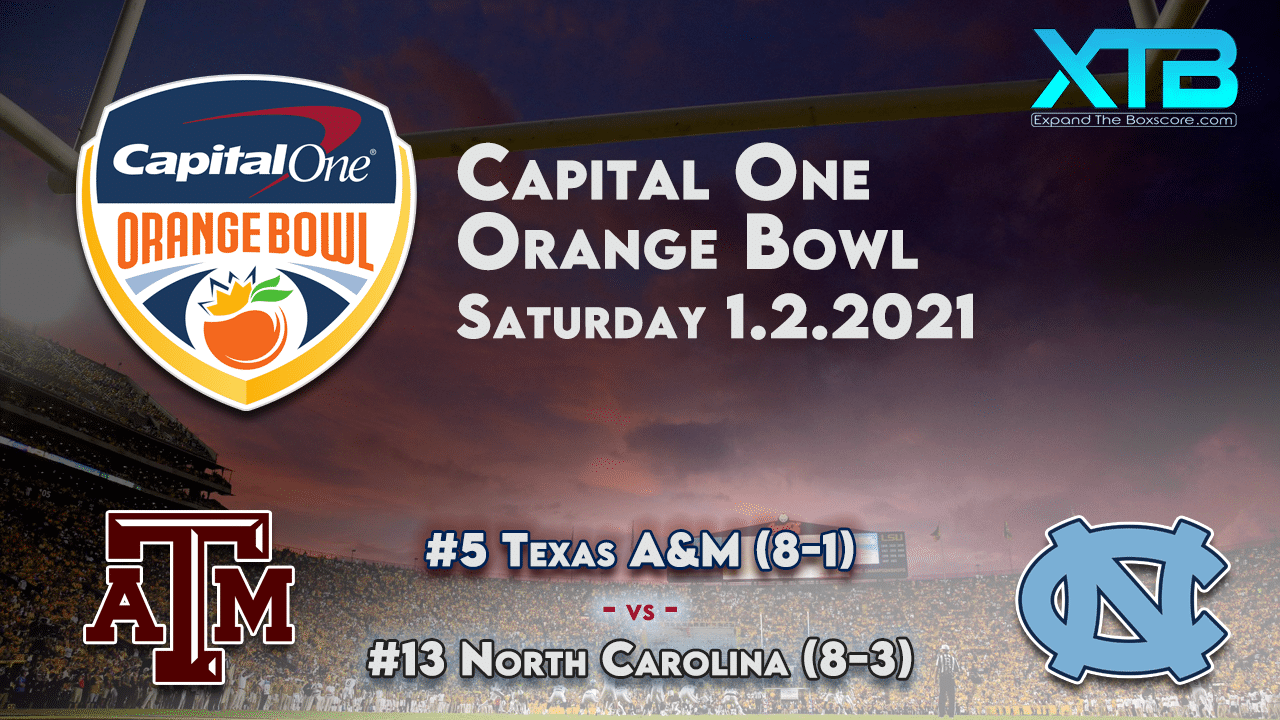 As a part of Expand The Boxscore’s NFL Draft coverage, we will be highlighting the draft prospects from each school for every bowl game. The players featured below will also be included in our NFL Draft Guide, which is set to release shortly after the combine. In today’s column, we will be taking a look at the Capital One Orange Bowl featuring the Texas A&M Aggies and North Carolina Tar Heels.

While Texas A&M might feel slighted by the College Football Playoff committee, this bowl game and matchup should not be taken lightly. North Carolina has a potent offense and is more than capable of putting up points against just about anybody. This one has the makings of a back and forth contest and should be fun to watch with all the draft prospects involved.

We will start things off with Aggies quarterback and Day 3 prospect Kellen Mond. As an athletic passer, Mond’s flashes of high-end performance and physical tools will intrigue NFL evaluators, but his inconsistent accuracy and decision making may prevent him from becoming a starter at the next level. He will certainly have an opportunity to cut his teeth as a backup, though.

Protecting Mond is Dan Moore Jr., a smart lineman who toes the line between guard and tackle at the next level. He wins with good hand usage and adjustments in pass protection but struggles to create movement as a run blocker. Moore will likely hear his name called in the fifth or sixth round on draft day.

Another hog molly to watch for TAMU is an offensive tackle Carson Green. At 6’6″ and 320 pounds, Green has NFL-level size, and he moves smoothly and has good hands in pass protection. However, he lacks some athletic ability overall power to be effective at the next level and will likely be a late Day 3 guy.

Michael Clemons is on the other side of the trenches and projects as a sixth-rounder to priority free agent. Clemons is a long and athletic defensive end who has great size at 6’5″ and 270 pounds, but he needs to improve as a pass rusher. When rushing the passer, he does not show a lot of bend and needs to add a few more moves to his arsenal.

Linebacker Buddy Johnson is another name of note for the Aggies. Johnson has been very productive with 199 total career tackles – 21 for loss – and is a very effective run defender. However, he struggles in coverage, which has become extremely important for linebackers at the next level and may prevent him from getting drafted.

Next to Johnson is Anthony Hines III, who is almost the exact opposite type of player. Hines has the athletic ability to be a coverage linebacker on Sundays, but he struggles with his instincts and ability to take on blocks against the run. Hines has already declared for the draft, meaning he will not be suiting up tonight, and he will likely be a sixth- or seventh-round pick.

At 6’4”, Texas A&M cornerback Myles Jones has rare size for the position and has the ball skills to go along with it. Unfortunately, his height comes back to bite him when covering smaller, shiftier wide receivers as he lacks the quick-twitch change of direction skills to stay in-phase against those types of players.

Jones is a project who will likely be selected in the seventh round of the NFL Draft or become a priority free agent.

Unfortunately, the Tar Heels will walk into Miami a little short-handed as running backs Michael Carter and Javonte Williams, wide receiver Dyami Brown and linebacker Chazz Surratt have opted out of the bowl game.

Newsome is a savvy route runner who can be a vertical threat from the slot but has a relatively small catch radius and struggles against physical defenders. He has a chance to sneak into the back end of Day 2, but he will likely be an early Day 3 pick in the NFL Draft.