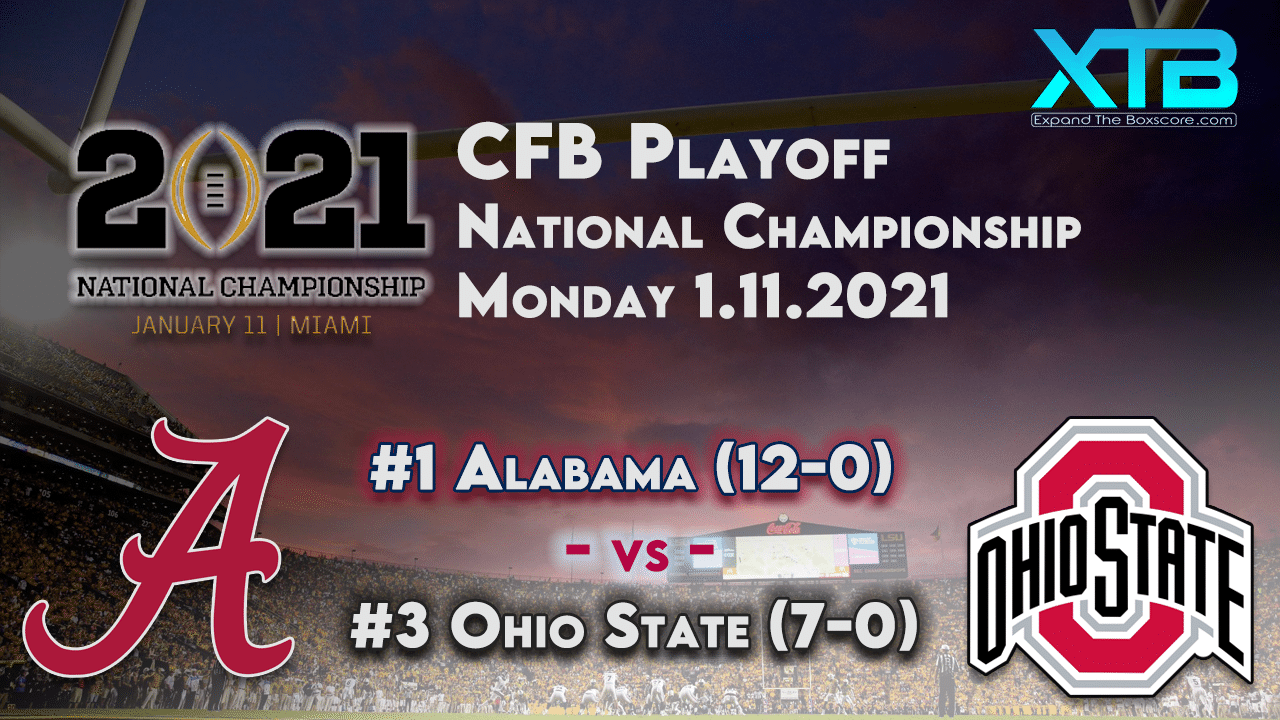 As a part of Expand The Boxscore’s NFL Draft coverage, we will be highlighting the draft prospects from each school for every bowl game. The players featured below will also be included in our NFL Draft Guide, which is set to release shortly after the combine. In today’s column, we will be taking a look at the College Football Playoff National Championship game featuring the Alabama Crimson Tide and Ohio State Buckeyes.

As promised, we will be focusing on five new players from each squad in this week’s column as we have already highlighted several prospects in the Rose Bowl and Sugar Bowl.

It is finally here, the National Championship. A lot of people expected Alabama to be here but Ohio State is a bit of a surprise after dominating Clemson in the semis. It is a fitting matchup as these two schools will probably be competing with each other for the most players selected in this draft class.

Jaylen Waddle is still questionable to play for the Tide, but just the chance that he might suit up and his status as a potential top 15 pick is good enough to deserve mention in this column. The wideout has the speed to be a deep threat and turn just about any reception into a big gain or touchdown.

If he can become more of a deceptive route runner and improve his hands, Waddle could become a perennial Pro Bowl player at the next level.

Slinging the rock to Waddle is quarterback Mac Jones. He is is a cerebral passer that works through his progressions and is very accurate when throwing to the short-to-intermediate areas of the field, and will be one of the first five quarterbacks off the board in the NFL Draft.

The problem is Jones struggles with the deep ball – both accuracy and arm strength – and lacks the mobility that has become more coveted at the position in recent years.

Protecting Jones is guard Deonte Brown, a road-grader with NFL-ready strength who can dominate in the run game. However, he struggles in pass protection due to slow feet and a tendency to give up his inside shoulder. As a senior the big man has made some strides in those areas, but the question remains, is it enough to make scouts and general managers comfortable spending a top 100 pick on him?

On the other side of the ball is one of Bama’s top defensive prospects, Christian Barmore. At 6’5″ and 310 pounds, Barmore has NFL-level size and the quickness and pass rush ability that NFL teams are looking for in a modern day three-technique, which is why he is a potential first-rounder.

However, his run defense could use some work as he struggles to hold his ground against double teams, and he primarily plays in passing situations – 218 pass-rush snaps versus 99 against the run – per Pro Football Focus.

Josh Jobe lines up at cornerback for the Crimson Tide. He is a physical corner that can disrupt wide receivers at the line of scrimmage. However, he does not have the speed to recover if wideouts can break free, and his change of direction in man coverage is not up to par. With that, Jobe will likely be a late-rounder if he decides to come out this year.

As for Ohio State, they have a couple of noteworthy tight ends in Luke Farrell and Jeremy Ruckert.

Ruckert is a slightly better prospect as he projects to be a fourth- or fifth-round guy. He is the better receiver of the two with a wide catch radius and the speed to create separation against linebackers. However, with only 270 career receiving yards, his lack of production is a concern.

Farrell is more of the blocking tight end who has good leg drive, can set the edge, and is a violent finisher. As a receiver, he has a limited catch radius and is really more of a check-down option who lacks the athletic ability to be a potential mismatch against linebackers. He will likely hear his name called towards the end of Day 3 of the NFL Draft.

Up front for the Buckeyes is center Josh Myers. With some impressive strength in pass protection and as a run blocker, Myers projects as a first-year starter and second to early third-round pick. However, his rather limited athletic ability hampers him when working up to the second level and on wide zone blocks, which might make zone-run heavy teams steer clear of him.

Defensively, Haskell Garrett is a name to watch for Ohio State. The defensive tackle has the strength to shed blocks as a run defender and win with power as a pass rusher. However, he is rather light at 286 pounds so that type of playing style might not hold up at the next level without some extra weight, making Garrett a third- or fourth-round guy.

On the second level is Pete Werner, who is a fast, physical linebacker that is natural in coverage. The problem is, Warner struggles to hold his ground and get off blocks against the run. On draft day, he should fall into the late Day 2 to early Day 3 category.

Draft Projection: Second or Third Round