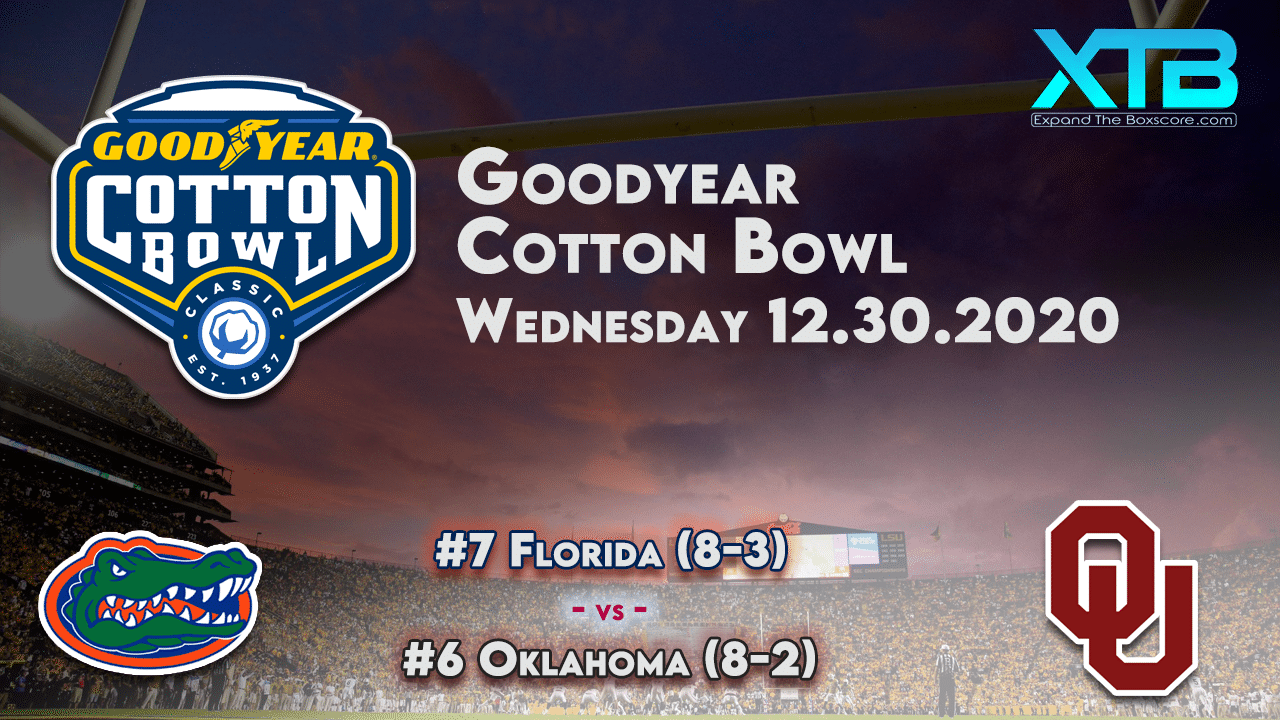 As a part of Expand The Boxscore’s NFL Draft coverage, we will be highlighting the draft prospects from each school for every bowl game. The players featured below will also be included in our NFL Draft Guide, which is set to release shortly after the combine. In today’s column, we will be taking a look at the Goodyear Cotton Bowl Classic, featuring the Oklahoma Sooners and Florida Gators.

If you have been bored or unimpressed by the bowl matchups to date, this one should get you excited. Two traditional blue blood programs that are top 10 teams this year and have only played each other once (2009 BCS Championship game) square off. Florida ranks sixth all-time with 54 first round draft picks and Oklahoma is seventh with 49.

We will start with the Sooners who have a very impressive center in Creed Humphrey. As a potential top 20 pick, Humphrey is an instinctive interior wrecking ball with some country strength and the leadership skills to be the orchestrator of an NFL offensive line. He could add some lateral quickness to be more effective blocking the second level in a zone-heavy scheme, but that is getting into nit-picking territory.

The primary benefactor of Humphrey’s play is running back Rhamondre Stevenson. He is an impressive downhill, straight-line back who is hard to bring down in the open field, but he struggles to recognize cutback lanes and is not much of a receiving threat. Also, Stevenson was buried on Oklahoma’s depth chart in 2019 and missed the beginning of this season due to a suspension, so he has a rather small sample size that could push him into the fifth-round category.

Defensively, the Sooners are almost just as impressive.

Potential third- or fourth-round pick Ronnie Perkins holds down the edge for Oklahoma’s defense. Perkins has some impressive change-of-direction skills and agility that allow him to win with stick moves as a pass rusher and defeat reach blocks against the run. However, he is often late with his initial chop to begin his pass rush moves and struggles to hold his ground against down blocks and double teams.

On the other side of Perkins is LaRon Stokes, a massive defensive lineman – 6’4” and 278 pounds – who has the strength to be an effective two-gapper and stout run defender. The problem is Stokes plays with high pad level and struggles to use his long arms effectively, which can get him into trouble against double teams.

He will likely be a priority free agent if he does not take advantage of the extra year of eligibility the NCAA has granted everyone.

At linebacker, Caleb Kelly is another fringe seventh-rounder for the Sooners. Kelly is a physical backer who craves contact and can disrupt slot receivers’ and tight ends’ routes with his hands. Athletically, his agility is not where it needs to be and he needs to improve his awareness in zone coverage.

Cornerback Tre Brown is a fifth- or sixth-round prospect, but he already declared for the draft and will not be playing tonight.

Shifting the focus to Florida, quarterback Kyle Trask is great at manipulating defenders with his eyes, but it took him four years to win the starting job, which could make NFL GMs hesitant to spend a top pick on him. There is a lot of ambiguity around the top quarterbacks after Trevor Lawrence in this draft class, so it will be interesting to see where Trask lands in April.

Defensively the Gators will still have plenty of talent.

Brenton Cox Jr. is an interesting NFL Draft prospect because he has some desirable traits like length – 6’3” – first-step quickness and a relentless motor. But the edge defender lacks strength at the point of attack and is a bit of a tweener, which could scare some teams away. As a redshirt sophomore, Cox could return to school but if he does not choose to, he will have a chance to be a third-round pick.

Another Florida edge defender to watch is Jeremiah Moon. With an impressive burst off the line, Moon can win with speed as a pass rusher and has the bend to take efficient routes to the quarterback. However, he will likely be a fourth- or fifth-round pick due to his lack of play strength and bad pad level as a run defender.

Moon’s running mate is defensive tackle Tedarrell Slaton, an unmovable object against the run who plays with low pad level and tips the scale at 358 pounds. When rushing the passer, Slaton can be effective when bull rushing but does not have a secondary move and is primarily a two-down player. He will likely be a mid-round pick come draft day.

Rounding out the defensive line is Kyree Campbell, a likely late-Day 3 selection. Campbell is a reliable tackler with quick hands and the strength to be a factor against the run. However, he relies on an adequate bull rush to get pressure as a pass rusher and does not show any other moves in this tool belt.

At linebacker, Ventrell Miller is extremely strong which helps to overcome his size deficiency – 6’0” and 222 pounds – when taking on blocks from offensive linemen. However, he has some questionable instincts and can be a beat slow to read his keys, pushing his NFL Draft stock down into the early Day 3 range.

Behind Miller is safety Shawn Davis, who is smart and shows good range and ball skills to be an effective single-high safety in the NFL. The problem is he is rather small at 5’11” and 185 pounds, leading to some tackling issues. With that, Davis will likely be a fifth- or sixth-rounder.

Davis has missed the last few games with an injury and it is unclear if he will be suiting up for the Cotton Bowl at this time. It has been reported that he will opt out of playing to prepare for the NFL Draft.

Donovan Stiner is another safety from Florida to keep an eye on. Stiner has the range to play as a deep-half player and the man coverage skills to be a nickel corner in sub-packages. However, his pursuit angles and run fits are not up to par, and he will likely serve as a backup who needs some time to develop at the next level.