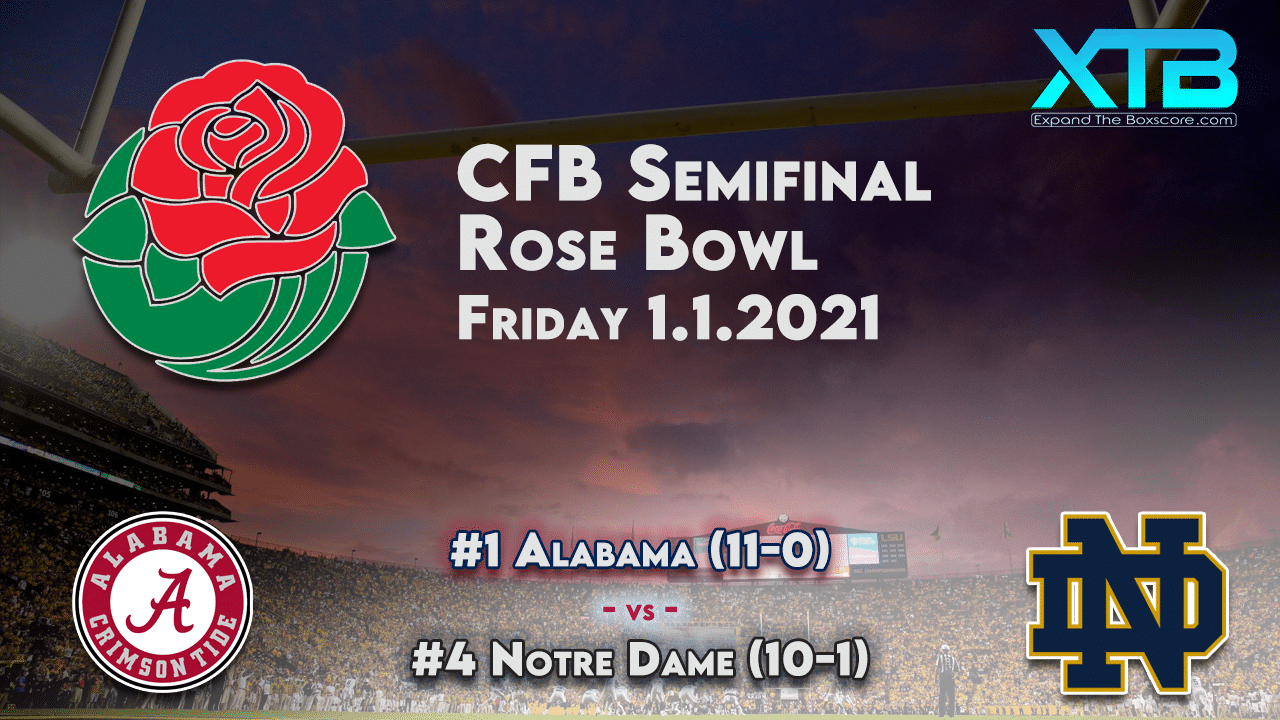 As a part of Expand The Boxscore’s NFL Draft coverage, we will be highlighting the draft prospects from each school for every bowl game. The players featured below will also be included in our NFL Draft Guide, which is set to release shortly after the combine. In today’s column, we will be taking a look at the Rose Bowl featuring the Alabama Crimson Tide and Notre Dame Fighting Irish.

Since at least one of these teams will be playing again and the sake of brevity, I will give descriptions for five players from each squad and just list the other prospects with their draft projection. Each player’s name is hyperlinked to a full scouting report as well.

Next week, I will go more in-depth on five others to keep it fresh. This way, you are not overwhelmed with information today, and the column for the Championship game has more value.

The playoffs are finally here! And as an ode to 2020, it is kind of fitting that one of the first football games of 2021 will be the Rose Bowl that is not played in the Rose Bowl…

Regardless of location, we have an interesting matchup at hand. Alabama has rolled through this season pretty much unchallenged, while Notre Dame is looking to shake off the ACC Championship game and their recent National Championship/College Football Playoff woes. Hopefully, this one stays close.

As per usual, the Crimson Tide has no shortage of NFL Draft prospects.

We will start things off with running back Najee Harris. As a punishing runner who can also make an impact in the passing game, Harris has just about everything NFL teams are looking for in a back. He does tend to miss cutback lanes, but he will still likely be one of the first running backs off the board in April as a Day 2 pick.

On the outside of the Tide’s offense is Heisman Trophy and Biletnikoff finalist, and potential first-rounder DeVonta Smith. His natural ability to create separation, along with his hands, make him a very valuable receiver for any quarterback. The problem is, Smith is listed at just 6’0″ and 175 pounds, which leads to some questions about how he will hold up against press coverage at the next level.

Upfront is Alex Leatherwood, an offensive tackle with a strong base and active hands in pass protection and is an effective down blocker in the running game. However, Leatherwood can be too aggressive by ducking his head and lunging at the point of attack, which leaves him susceptible to swim moves as a pass or run blocker. As for the NFL Draft, he will likely fall at the end of round one or the beginning of the second.

On the other side of the ball is Patrick Surtain II. With excellent press coverage skills and the ideal size – 6’1” and 203 pounds – Surtain might be the most “NFL ready” prospect at the position. He does have a habit of arm tackling instead of bringing his feet and wrapping up, and can struggle against quicker pass-catchers, but he is still pretty much a lock to go in the first round.

Then there is linebacker Dylan Moses, who has seen a fall from grace over the last couple of years. Before the 2019 season, Moses was considered one of the top linebackers in that draft class due to his athleticism and sure tackling, but he tore an ACL during training camp and did not play in a single game.

In 2020, he has struggled mightily both in coverage and against the run, which has pushed him into the second, and maybe even third-round category.

Notre Dame has its fair share of prospects as well, though not nearly as many “high-profile” guys.

First, there is quarterback Ian Book, who recently became Notre Dame’s all-time wins leader. Book’s best trait is his ability to throw on the run, and he does have some nice touch on his deep balls. However, he does not have the ideal size at 6’0” and 212 pounds, which shows up on tape when trying to throw around the large bodies Notre Dame has up front.

That will likely push him into the priority free agent category.

Protecting Book is guard Tommy Kraemer, who is a people-mover in the run game and a brick wall in pass protection. If he can improve his agility and overall athleticism, he will have a chance to start as a rookie. But right now, the Kraemer projects as an Early Day 3 prospect and back up to begin his NFL career.

Holding down the edge for the Fighting Irish is potential second-round pick Liam Eichenberg. Due to his brute strength, ability to get a push as a run blocker, ideal size, and finishing mentality, Eichenberg will fit best in the NFL as a right tackle. He does need to work on his punch timing and second level range, however.

Defensively, Notre Dame has another stand-out linebacker in Jeremiah Owusu-Koramoah. With high-end speed, coverage ability, and blitz acumen, Owusu-Koramoah has the tools to become the ideal coverage linebacker at the next level. At 216 pounds, he will need to add some size and strength to become a better run defender, but he still projects as a late first- to early second-rounder.

Daelin Hayes lines up along the edge for the Irish and is another name to keep an eye on. Hayes’ strength at the point of attack allows him to be an effective run defender and power rusher, but he has average athleticism and lacks a pass rush plan to be a blue-chip prospect. He will likely fall anywhere between the fifth- and seventh-rounds in the NFL Draft.

Draft Projection: First or Second Round

Draft Projection: Second or Third Round

Draft Projection: Sixth or Seventh Round

Draft Projection: Fourth or Fifth Round

Draft Projection: Sixth or Seventh Round