Posted at 09:54h in Articles by Brian Creagh
0 Likes
Share

ADP, History, and Other #DWG5 Stuff

Maybe by now you’ve seen the hashtag #DWG5 floating around the #FantasyFootball twitter-verse. What is this? you may have even asked yourself. Well, it is short for Draft With Giants (formerly Drafting With Giants), and it is now in its fifth iteration. A Best Ball knockoff of the Scott Fish Bowl that I created, you guessed it, four years ago. It started with humble beginnings, fielding just 24 contestants. But, they were big names in the industry, aka Giants, and a good majority of them have stuck with me through the years. 2019 is now the biggest and best so far, increasing to 240 teams! Not only that, but I had over 400 trying to get in! (If you would like to pre-register for next year, please send an email to DraftWithGiants@gmail.com and put ‘DWG6 Pre-Registration’ in the subject line.) We only use offensive players (no Kickers or Defense), and I have introduced some unique scoring categories to emphasize how customizable you can get when you use the Fantrax premium league manager to run your leagues. So, what are the scoring settings, and how does this all work? Read on!

I mentioned there are 240 teams this year, and if you were wondering why that number, it is because it represents 16 Divisions of 15 Teams each. The idea behind that was to have a 64 team playoff bracket, akin to the NCAA Basketball March Madness Tournament. Four (4) teams from each division will advance after an 11 week season to the Playoffs, where they will be seeded by Region (4), and square off in a single elimination format. The Regular Season will consist of an 11 game schedule, with Standings determined by Points Scored for the week. Most Points ranked from 12 down to 1. The Playoff bracket will go from Week 12 through the end of the NFL regular season’s Week 17. After all of this, out of 240 teams, only one will be left and crowned as the #DWG5 Champion!

Scoring is pretty much standard with your basic categories, however QBs get 5 points for Passing TDs. Where it gets interesting is with categories like 0.25 points per carry, and 0.5 points per target. To counter that, there are also negative points for such things as drops, incomplete passes, and runners that are stuffed at the line. Additionally, players are rewarded points for return yards, both kickoffs and punts. It really makes you second guess how you have your Wide Receivers graded! You can see the full scoring breakdown here: 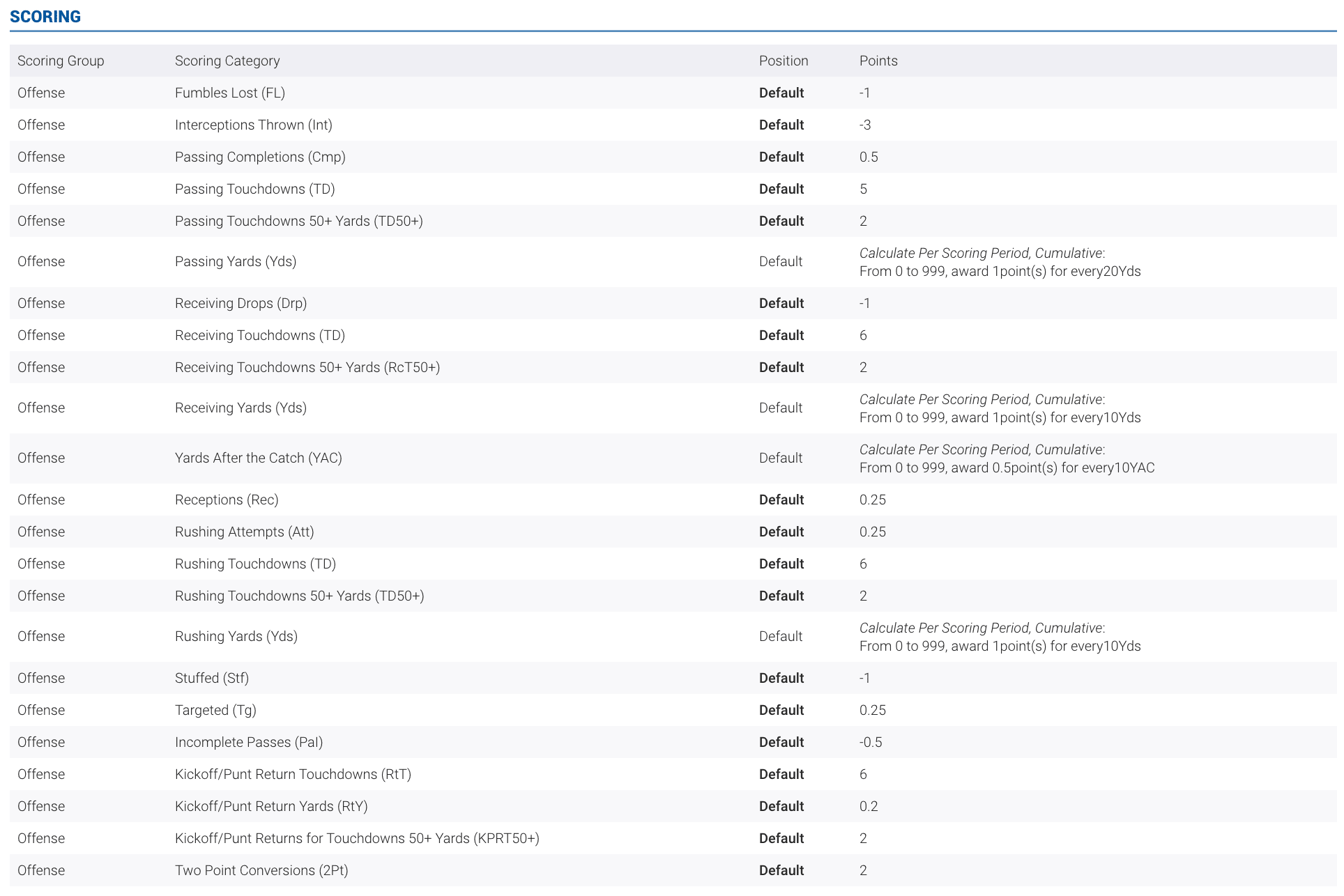 There will be a table created to show each week’s updated Rankings, both within Divisions and Overall. Additionally, a weekly update with written posts, and videos/podcasts containing various guests participating in the tournament is something to look forward to. I have been blessed to receive great support, with many contributing prizes to the pot. I’d like to thank everyone for helping to make this such a fun and rapidly expanding tournament! I’d especially like to thank Tim Wagner, and Fantrax, who have been gracious enough to host this all for FREE!

There are really too many talented players in this contest to name them all, so please check out each division to see who is competing for yourself. I named the divisions after some websites, more as a tip of the cap than anything else. Teams were randomly drawn, so I’m curious, which do you think is the toughest, and/or easiest division? To follow along with each Divisions draft board, please click on the division of your choice: