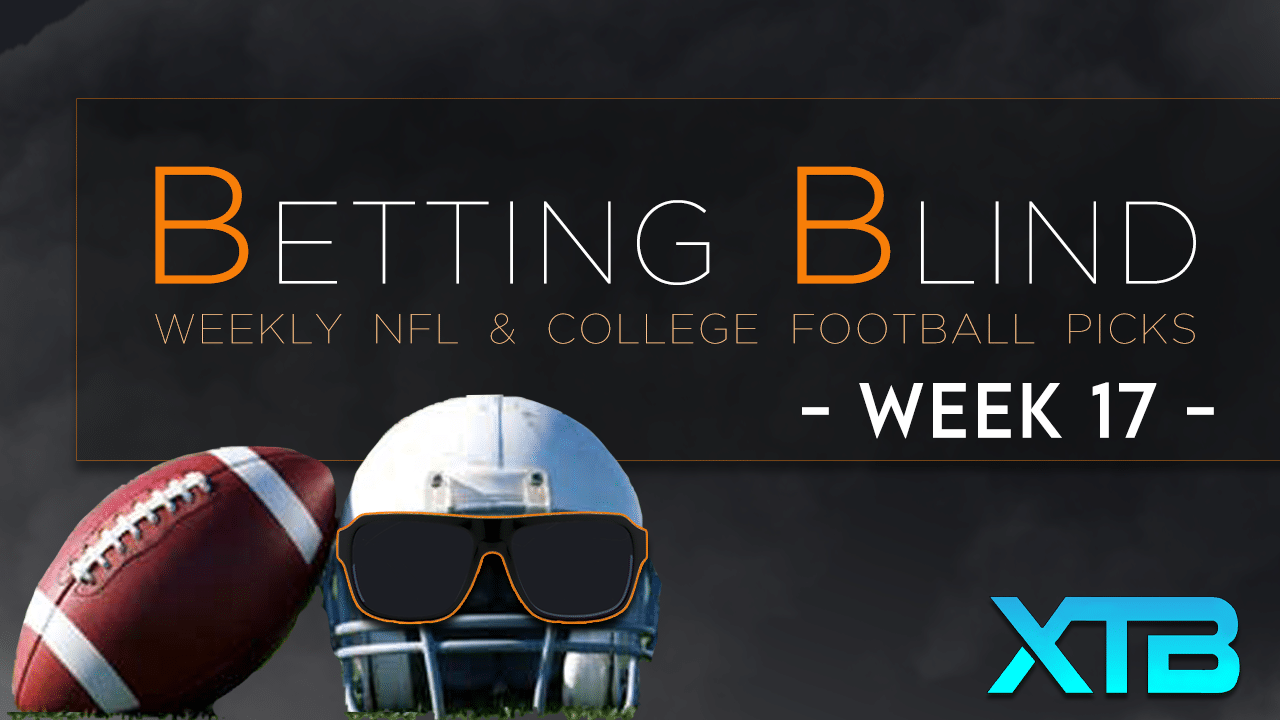 Well, we came off a shaky Week 15 to go 3-0 last week. Such is wagering. Let us now finish strong this season with another winning week.

Week 17 games are difficult to predict. Some teams play starters while others do not. So, finding the right wagers are important. As we finish up the initial season of Betting Blind, I thank you for staying with me and hope you made money along with me. Please reach out to me on Twitter @EnvisionFF with any suggestions going forward.

And of course, Betting Blind will still be here with you through the playoffs.

Derrick Henry is a stud. This is a fact, not a statement.

In this same Week 17 matchup last season, Henry ran for 237 yards and two touchdowns to win the rushing title from Nick Chubb. When the two teams played earlier this season, the Titans won in overtime 42-36 and Henry again ran for 212 yards and two more scores. Since then, the Houston defense has actually gotten worse. They rank dead last against the run in the NFL.

Ryan Tannehill is also a stud. He will be throwing to a great option in A.J. Brown as well as a finally emerging Corey Davis, both of whom can have big games this week also. Everyone on Tennessee is in play this week. If the Titans win, they are in the playoffs. If they lose? They are basically eliminated. They will win, even with Deshaun Watson on the other side.

When it comes to the Houston offense, Watson leads an attack now headed by Brandin Cooks and David Johnson. After having 13 receptions two weeks ago, Johnson had two touchdowns last week. Against a Tennessee defense ranked bottom five against the pass and the run game, another touchdown this week is almost a certainty.

Cooks and Keke Coutee will be able to gain yardage against a mediocre secondary for Tennessee. With Johnson also in toe, both teams will move the ball and score at will. For this reason, I am a little nervous about the -7.5 line with the Titans. Houston could easily score a final minute touchdown to lose by less than seven. But points? I am not concerned about points here.

Both of these teams hate each other. They are bitter rivals and neither one will let up in this matchup.

The Bears, behind Mitchell Trubisky, are fighting to make the playoffs. Coming off a demolition of Jacksonville last week, they look to continue the ride.

Although the Bears have been a bit up and down, they have been more up recently as David Montgomery has finally rounded into form. He has showed why the Bears used a draft pick on him last year having run for over 100 yards in each of the last three games. Against a putrid Packers run defense, he could easily do so yet again in this one.

Jaire Alexander is a shut down cornerback but he does not travel with opposing teams’ top receivers. This means Allen Robinson could have a monster game if he stays on the opposite side of the field. The Bears know this and will exploit this. This will lead to a touchdown from Robinson this week.

On the other side we have Aaron Rodgers. Enough said. He is the NFL MVP. He is having a remarkable season and will lead the Packers to a number one seed with a win. He has a no mercy mentality which will lead to pain for the Bears.

Whether it be Aaron Jones, Jamaal Williams, or A.J. Dillon in the backfield, the Packers will run the ball. When they do pass it, they have the best receiver in the NFL in Davante Adams catching the ball from Rodgers. Chicago is known for having a good secondary. They are banged up a bit though and this will lead to big plays from Adams, possibly even MVS or Lazard.

I do not know who will eventually win. I do know it will be physical and high scoring.

The Raiders blew their chance to make the playoffs last week. The only thing they have left now is to beat the division rival Broncos in the final week of the season. Jon Gruden is not a great coach. He has the worst win percentage of any coach in Raiders history. This must sting for someone with his ego.

Derek Carr came back last week in hopes of leading Las Vegas past Miami in a must-win game. Despite having his hamstring injured the week prior, he almost accomplished the feat. Nelson Agholor is a revelation for the team, leading the team in receiving scores from the wide receiver position and being the deep threat they thought they drafted in Henry Ruggs. Along with Josh Jacobs, the Raiders will be able to score in this one.

The Broncos defense is not good. Neither is the Raiders of course, but that is why I really also like the over. The difference is Denver has no offense.

Melvin Gordon has been solid this season but not good. Phillip Lindsay is injured yet again and will miss the game. This will limit the offense surrounding Drew Lock even further than it already is. While Jerry Jeudy and Noah Fant are set to break out next season, Week 17 is not the game where it starts for them.

The Raiders will score early to take the lead here. After this, they will ride Jacobs the rest of the way. Denver will not have a chance to get their offense going and the Raiders will pull away, at least enough to win by a field goal. And we know how much they love kicking field goals.