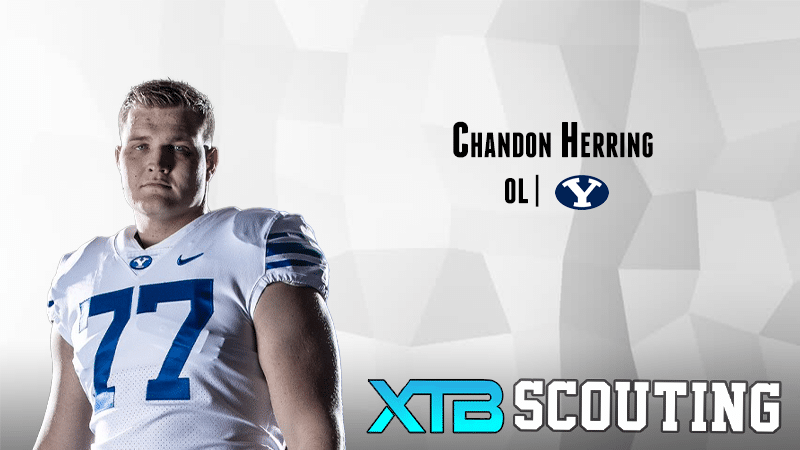 Chandon Herring is listed as an Offensive Tackle at BYU, but has played both tackle and guard in his career. He headlines a stout BYU offensive line protecting rising quarterback prospect Zach Wilson. BYU is independent of conference which has resulted in lower than average quality opponents, but Herring has performed against them. BYU’s offense relies on the strength of QB Zach Wilson and Herring isn’t a liability in his pass pro, but he excels in their run schemes. BYU runs plenty of zone, whereas Herring looks more comfortable operating gaps.

– Huge figure allows for a powerful anchor against bullrushes
– Versatility to play guard and tackle if needed, has experience playing both
– Impressively low height on blocks given his size allows for powerful run blocking
– Absolutely mauling run blocker who can occasionally block defenders into another dimension
– Extends hands during pass blocking and creates space between defender and the quarterback

– Can struggle against stunts that overload his gaps resulting in a loss of balance and control in his set
– Moves somewhat stiff, can get beaten by shiftier rushers
– Loses balance more consistently than desired, could benefit from a wider base in run blocking
– Lacks horizontal movement to effectively receive pass offs from his center when nose tackles attack his A gap
– Can struggle to lock on second level defenders who tend to run around him
– Feet could be smoother in pass pro, stiff feet leading to getting beat by slippery pass rushers

Herring is a huge and tough player who headlines a good BYU O-line. His play is very old school with powerful run blocking. You will rarely see him struggle in a battle of strength and he will be able to handle NFL defensive lineman in that respect. Where Herring might struggle is against talented, shifty pass rushers who will exploit his limitations in pass pro. He’s simply not there yet in pass protection with feet too and base simply too stiff. Herring however does have the physical tools capable of improving in that area. He would best perform in a tough run-focused offense utilizing gap schemes.. Herring is a mid round prospect, likely early on Day 3. He does have the size and tools that NFL coaches might fall in love with and he has high upside as a result.

Look for Herring to continue to impose his will on defenders in run blocking. Herring has near comedic highlights at times blowing defenders off the ball. Expect that to continue against all levels of competition in 2020. Herring needs to show the capability of handling tougher pass rushers in order to solidify his draft stock. Being more effective on second level blocking would also improve Herring’s stock in zone based running schemes.