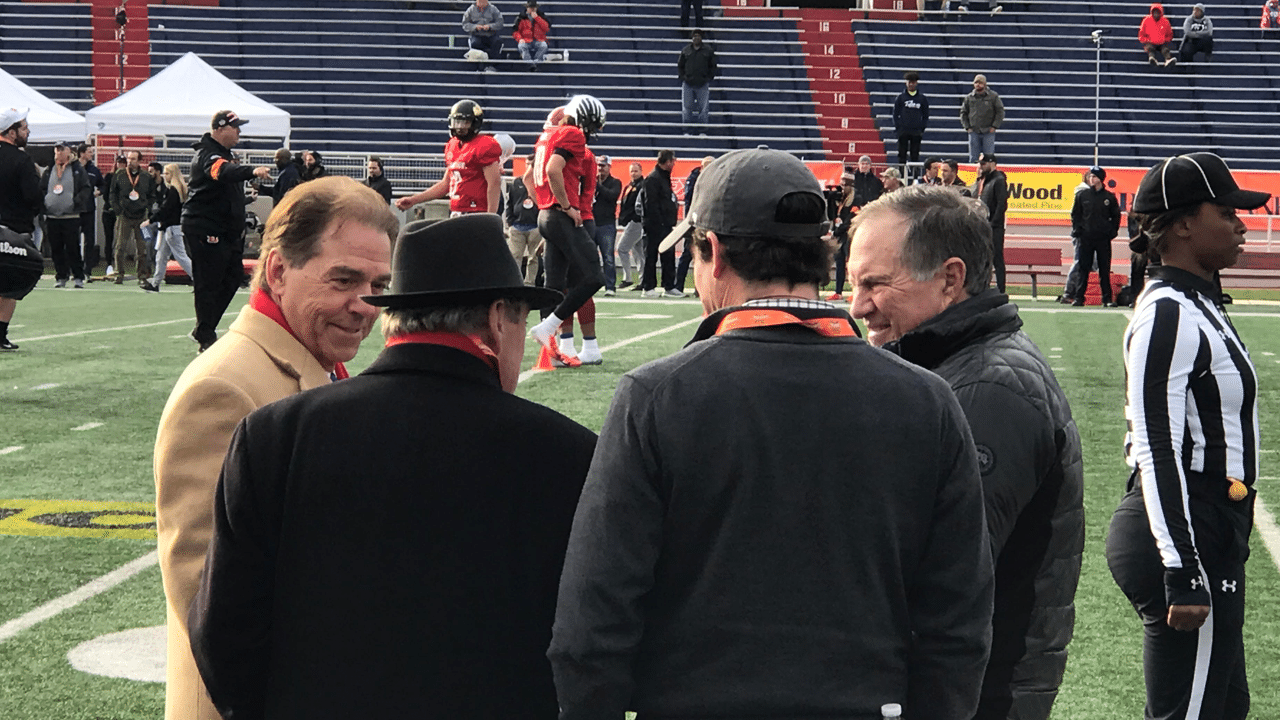 What It All Means

Another year in the books means another trip to Mobile, Alabama, and with that comes my 2020 Senior Bowl Recap. As my NFL Draft portfolio expands, so do my frequent flyer miles to the Senior Bowl. Six in total now, and yet another phenomenal show, where things just feel frozen in time. The familiar faces, the eagerness of a new class making their first trek, of course the players, and the entire Senior Bowl staff itself. A lot has changed, and yet nothing at all. Nights spent at Veets, days that feel colder and windier than you packed for, and a whole lot of networking in between. So what exactly do I glean from investing this time? “I can just watch it on NFL Network and have the same evaluations”, seems to be a common theme in more recent years. Yes, in theory you could make this claim. But there is a lot more that doesn’t come through the television, unfortunately, and most of it is not even the plays themselves at all.

The biggest winners at every Senior Bowl, in my opinion, are always going to be the Linemen, and the Wide Receivers. It is somewhat unfair to the other positions, but these are the only two groups consistently highlighted in one on one match-ups. You might think I mistakenly left out Defensive Backs, but you try guarding an elite athlete in a solo act with the spotlight on you. It ain’t easy, and usually there is a lot of holding, grabbing, and yellow flags on the field for interference. This year was no different. The same is true for the Quarterbacks who are learning new receivers and their timing, and typically you will see more check downs than you would voluntarily sign up for. But, you can sometimes see improvements from day one to day two to day three. This says a lot about a player’s makeup. You can also gain a great advantage from the raw athleticism and size on display, which definitely does not come through the television. What about Running Backs, Tight Ends, and Linebackers you ask? There are some things you can gather, most notably pass protection, hands, speed, quickness, and vision, but I never feel there are enough isolated opportunities for them to truly make a major impact. There are certainly exceptions to this rule, and someone will pop for a play or two, but generally speaking, I gravitate towards the WRs most. I’ll touch on all of the positions a little, but here is what I learned about the 2020 class.

So much is said about the depth of the Wide Receiver position this year, and to a large extent it is true. Make no mistake, the top receivers in this class are all underclassmen, and I would not anticipate seeing one of these participants called before the third round. There is a chance for one to sneak into the second round somewhere, but there was no Deebo Samuel in Mobile this year. Brandon Aiyuk had that opportunity, but sat out with an undisclosed injury. That does not mean there were not winners though, and from my list I count at least 8 that would fit that bill. I broke them down into two separate tiers with the top four being 3rd round talent or better, and the second four being no worse than 4th round talent, if I were a GM.

I cannot say enough about how much Mims impressed me this week. My initial thought was that he looked like he was going half speed, or was not fully healthy, that he did not look that fast, or that special. But he was, and he was consistent with that through all three practices. I cannot say I particularly love his straight-legged gait, but it does not prevent him from getting open. He has a good blend of speed and quickness that he pairs with unassuming physicality and aggressiveness. He had the best hands of any receiver I saw, and it felt like he did not drop a single ball all week. He was one player I heard consistently mentioned, and a good combine could be enough to propel him to the second round of the NFL Draft. I feel comfortable that he will go in the 3rd at the very latest, and I love his size and lean frame, coupled with long arms.

Of all the receivers who accepted invites, Jefferson may have had the lightest portfolio. I was not quite sure what to expect, but I remembered seeing nothing but encouraging comments about his background, and ability, particularly for his route running. Van Jefferson did nothing to disappoint, and routinely made DBs look foolish with a wide array of quick jab steps and change of direction cuts. He showed good ball tracking, clutch hands, and appeared faster than what I was expecting. All in all, I would not be shocked to see him as having made the biggest leap in improving his draft stock.

It is pretty amazing how quickly Johnson’s career has gone. I for sure thought he would have been in the NFL long before going through four years and being Senior Bowl eligible. I do not think I am alone in that narrative, which is why so many appear to have written the promising prospect off. Even after tweeting out how impressive he looked in practice, there was still reluctance and hesitation, and that included Texas fans. What I can say as a witness is that Johnson was displaying quickness and speed guys his size should not possess. I have heard the Calvin Johnson dreams, and could not tell you if he will be more that, or Stephen Hill. He absolutely is going to excite and intrigue some front office, and his week was just a declaration of having all of the physical tools desired.

Admittedly, I did not pay extremely close attention to Hill throughout the week with live eyes. But, he was a name I heard many talking up, and I wanted to make sure to pay closer attention to the reps in film review. I saw comments talking about his quickness being unfair, but honestly I did not see it. If you ever saw Penny Hart reps at Senior Bowl, you know what the standard is. I did not think Hill was bad, but he also did not jump out at me as being exceptional. Yes, he had arguably the best singular highlight play of the week with his one-handed grab. And yes, you could say he was the top receiver of both rosters, but again, there were no first rounders down here this year. Where some get unfair negative bias, I think Hill is benefitting from some of the recent misses by many with the Ohio State graduates. I repeat, this is not a knock on Hill, I just do not see him as being any higher than a Top 75 pick at best. 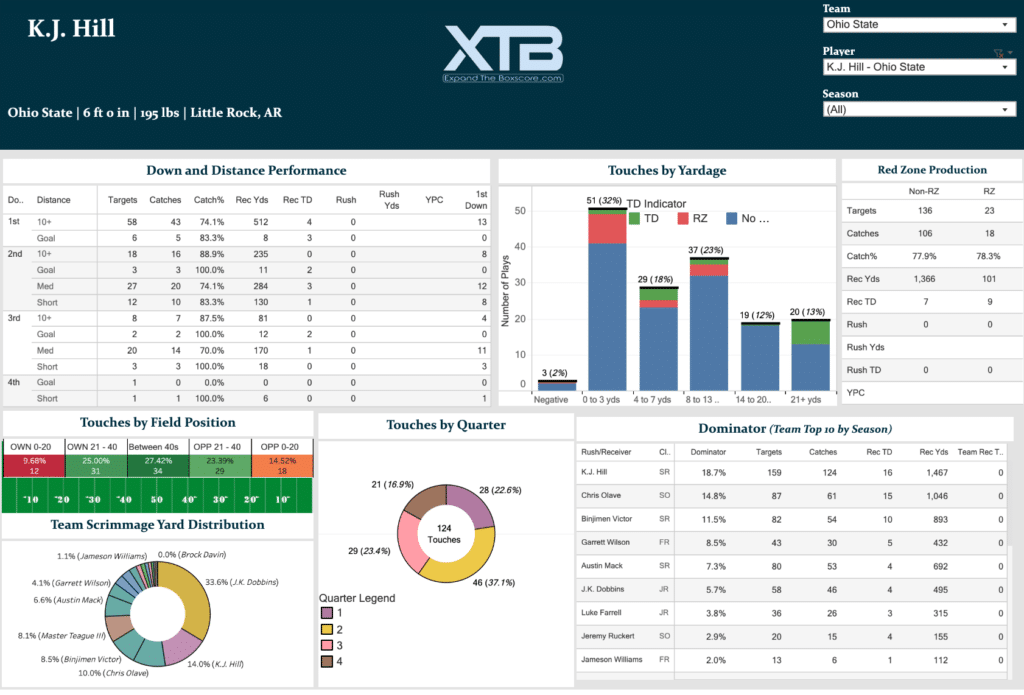 I will provide more detail on these tier two guys with a second part follow up to this post.

Continuing with this 2020 Senior Bowl Recap, Justin Herbert was head and shoulders above the pack at QB. He is a bona fide 1st rounder, and will be a nice consolation prize for an NFL team not in a position to draft Joe Burrow or Tua Tagovailoa. I could even see him leapfrogging Tua, if the hip is too much of a concern for some. I simply cannot envision Herbert making it outside of the Top 10 picks overall. Jordan Love will end up as my second best QB this week, because truly the complete package is there, but it is way too inconsistent at this stage from what I saw. In that regard, there was not a huge difference between he and Jalen Hurts. I know that is not what people want to hear, but it is what I saw (I think). Love will fall somewhere between the end of the 1st round, or the end of the 3rd. There is that much variance. Hurts falls into that same group, although I heard some very negative reports on his character and likability off the field, which could drop his stock even more. Anthony Gordon is much closer to Luke Falk than he is Gardner Minshew, and Shea Patterson does have decent arm strength, despite what the replies to a tweet of mine would indicate.

The Running Backs did not do much to impress, with the exception of Joshua Kelley, who was Zack Moss’ replacement. My lack of impression was not there fault, as much as it is really hard to get a good look at RBs in this environment. Tight Ends are in a somewhat similar predicament, but Adam Trautman looked every bit the part people were hoping for. Stephen Sullivan and Sean McKeon were more athletic than I anticipated, and Josiah Deguara and Harrison Bryant splashed here and there. I was much more impressed than I thought I would be by Brycen Hopkins, who just continuously found ways to get open and stretch the seam.

I did not take great notes on the trench battles, and for more in depth thoughts and takeaways from the Defense, I highly suggest checking out Jordan Rains and Steve Stulls who joined me in Mobile and handle the IDP 411, along with Jarod Gray. I can tell some winners of the week included, in no particular order: Kyle Dugger, Javon Kinlaw, Neville Gallimore, Francis Bernard, Zack Baun, Bradlee Anae, Joshua Uche, Jason Stowbridge, and Trevis Gipson.

Stick with Expand The Boxscore for more NFL Draft coverage, including my 2020 Senior Bowl Recap Part 2, Quarterback rankings and reviews from Ricky Valero, my Mock Drafts, Defensive breakdowns from the IDP 411 crew, and player profiles. 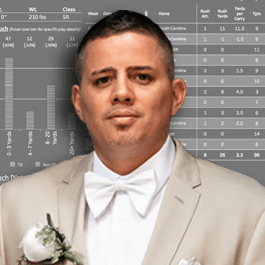 Andy is a jack of all trades in the Fantasy Sports industry, covering football, baseball, and the NFL Draft. He has written, edited, podcasted, and produced over 1,000 videos for his various series, in addition to dozens of guest appearances and collaborative pieces.
A top ranker on Fantasy Pros for both Football (23rd in 2018) & Baseball (7th in 2018), avid fan of mining for MLB prospects, and former D1 College hoops player, Andy is a native New Yorker, who has served as a firefighter in the FDNY for the past 18 years and counting.