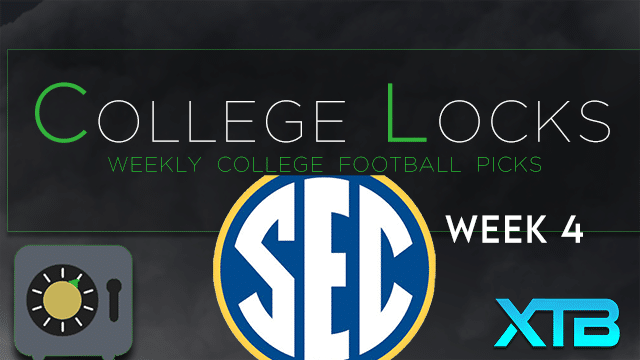 College football has had similar ups and downs as the rest of the sports world, and the SEC is no different. That said, it is time to break down and predict the SEC in Week 4 of the most unpredictable college football season we have seen.

Kentucky is coming off their first win of the season and Tennessee is coming off their first loss. Since Jeremy Pruitt took over at Tennessee, the Vols are 2-1 against the Wildcats with two of the three games being decided by a single possession. The point totals in the last two matchups between these teams have been 30 and 31 — both games going under their projected points by double-digits.

Both these teams are run-first offenses with questions about the reliability and consistency of their quarterbacks. I think Tennessee wins another close game in Knoxville but I am not confident in either team to pick against the spread. I do think we see a low scoring game and they stay under the 46 point total.

Mississippi State quarterback KJ Costello set an SEC single-game record throwing for 623 yards in a Week 1 upset win over LSU. Since then, the Bulldogs have been in free fall, committing eight turnovers and scoring only 16 points combined in back-to-back losses against Arkansas and Kentucky.

The Aggies have been on the opposite trajectory, starting the season with a narrow win over Vanderbilt and a blowout loss to Alabama before last week’s huge upset win over Florida. With senior receiver Jhamon Ausbon opting out prior to the season, quarterback Kellen Mond was left without a single upper-classmen at receiver or running back.

The lack of experience and continuity showed early, but against Alabama and Florida, the trio of Isaiah Spiller, Chase Lane, and Ainias Smith have combined for 559 all-purpose yards and five touchdowns.

Texas A&M will miss sophomore wide receiver Caleb Chapman had nine catches for 151 yards against Florida before going down with a season-ending knee injury. Still, I think between both struggling defenses and Mississippi State’s turnover-prone offense, the Aggies will have enough firepower to cover by at least a touchdown.

This game has been circled on the calendar since the SEC schedule was announced in August – No. 2 vs. No. 3, Kirby Smart vs. his former head coach Nick Saban, a rematch of the 2018 National Championship and 2018 SEC Championship. Three games into the 2020 season, both are 3-0, but neither teams’ seasons have gone as expected.

Georgia’s offense stumbled out of the gates, particularly on offense after expected starting quarterback Jamie Newman opted out in September, and USC-transfer JT Daniels, coming off a torn ACL in 2019, was not cleared to start the season.

Former fourth-stringer Stetson Bennett has steadied the ship since taking over midway through Georgia’s Week 1 matchup with Arkansas. In three games, Bennett has completed 63.1% of his passes while throwing five touchdowns and zero interceptions.

Georgia’s defense on the other hand, was predicted to be the best in the SEC if not all of college football, and has been as advertised. Through three games, they lead the SEC in points allowed (12.3/game) and rushing yards allowed (38.3/game), and are second in passing yards allowed (198.3).

The Crimson Tide have been the opposite – unstoppable on offense but struggling on defense. Nick Saban’s once-vaunted pass defense has allowed 322 yards per game against their first three opponents, including 379 yards and 48 points against Ole Miss last week.

The defense would be a bigger concern if the passing attack had not been the best in college football.

Through three weeks, Mac Jones has thrown for over 1,100 yards and three Alabama receivers (Jaylen Waddle, DeVonta Smith, and John Metchie III) are all averaging 100 receiving yards per game.

What happens when an unstoppable force meets an immovable object? In this case, I think we see a lot of points on the board and Nick Saban outduels his old protégé yet again by at least a touchdown.