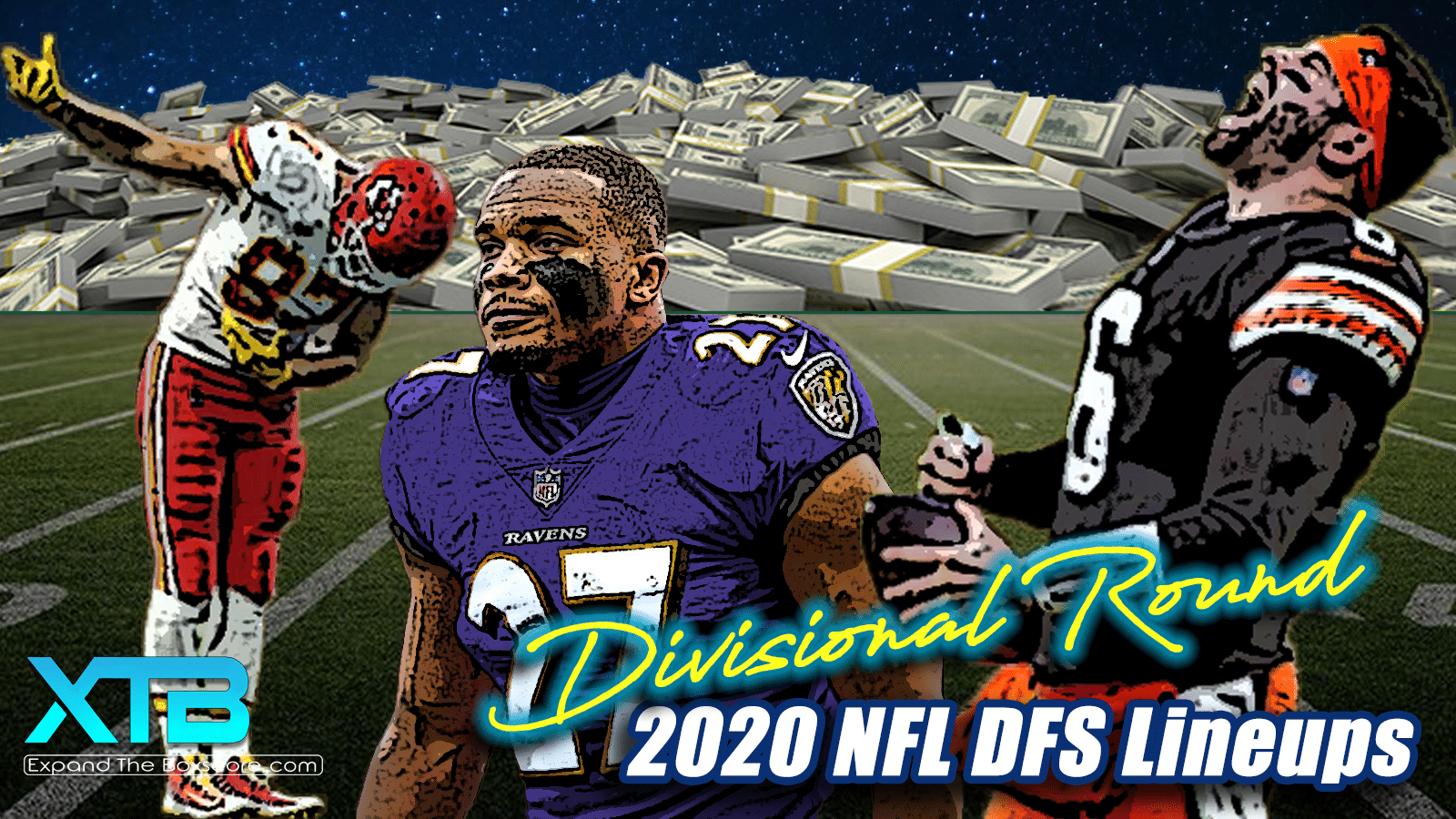 Posted at 10:40h in DFS by Rolando Gonzalez
0 Likes
Share

The Divisional round of the NFL playoffs has arrived! What an unbelievable slate of football we got during Super Wild Card weekend. This week’s slate of games is filled with matchups that are just too irresistible to pass up. Here are my DFS must plays for the Divisional playoff weekend.

This weekend’s DFS slate is four games with two on Saturday and Sunday.

Baker Mayfield is my top play for this weekend. Baker is coming off a great performance last week against the Pittsburgh Steelers, throwing for 263 yards and three touchdowns. This week he gets to take on the top-seeded Kansas City Chiefs in what should be a high-scoring affair. Baker must be at his best this week to match Mahomes punch for punch.

The key is for Cleveland to control the ball and in order for that to happen Baker needs to play turnover-free football. Kansas City has been vulnerable at times against teams with balanced offenses. I am certain we will see plenty of play action passes and some deep shots from Baker to utilize his arm strength and hit some big plays against the Chiefs defense.

I expect Mayfield to throw for 300 yards and four touchdowns as he will do everything in his power to keep Cleveland in this game. Baker may not be the safest play of the weekend but he is definitely the one with biggest bang for your buck.

Baker is priced as the seventh quarterback on DraftKings and sixth on FanDuel. I am betting big with Baker because if he hits his ceiling this week like I think he can, he will carry DFS lineups as a contrarian play.

J.K. Dobbins is in store for a big day as he takes on the Buffalo Bills this weekend. Over the last six weeks, Dobbins has taken over lead back duties for the Ravens and has solidified himself as the workhorse back in this offense. Going back to Week 11, every game that Dobbins has received double digit touches he has scored double-digit fantasy points.

This week I bet that not only will Dobbins have at least 10 touches, he will have at least that in the first half. Last week against the Indianapolis Colts the Buffalo run defense showed weakness and failed to contain running backs Jonathan Taylor and Nyheim Hines, giving up over 150 rushing yards combined between the two of them.

With this game poised to be a shootout (50-point game total), Baltimore will need to get the rookie going early to give themselves a chance to keep up with Buffalo’s high-powered offense. I expect 25 touches for 150 total yards and a couple of scores for Dobbins and a Baltimore ‘W’.

Michael Thomas is my top play at wide receiver for this weekend. The preseason number one ranked receiver has had a very disappointing fantasy season so far but as the Saints advance further into the playoffs, they will need their superstar to be at his very best in order to take down Tom Brady and the Tampa Bay Buccaneers for a third time this year.

Thomas is coming off of a solid performance against the Chicago Bears where he had five receptions for over 70 yards and a touchdown. This game he faces a Buccaneers secondary that gave up 300 yards passing last week to Washington. They failed miserably at slowing down the Football Team’s top two receiving options as both Scary Terry and Cam Sims combined for almost 180 receiving yards.

I expect Michael Thomas to torch Tampa’s defensive backs and Drew Brees will feed his number one target with a healthy amount of targets. I expect Thomas to have a playoff game to remember – he is going off for 15 receptions for 130 yards and a couple of touchdowns.

This one is a no brainer as Travis Kelce is my top DFS tight end play for this weekend. The consensus top tight end in the NFL is a must-play this week as Kansas City takes on the Cleveland Browns. Kelce has been an absolute beast all season, averaging over 20 points per game.

With every game a must-win from here on out, the Chiefs will need to do what they do best and let superstar quarterback Patrick Mahomes feed his top receiving threat and take advantage of Cleveland’s vulnerable defense. Last week against Pittsburgh, Cleveland survived the shootout despite giving up 501 passing yards and failing to cover any of the Steelers short to medium routes.

That is where Kelce makes his living. He will have no problem finding the holes in the coverage and he will cause havoc on the Cleveland secondary. Travis Kelce is a DFS player’s dream this week with the tight end position not having much firepower outside of himself. I have no problem spending top dollar for Kelce as I feel he will be the overall leader in fantasy points for this weekend.

Kelce’s stat line for the game will be monstrous. I have him going for 10-plus catches for over 125 yards and two touchdowns.