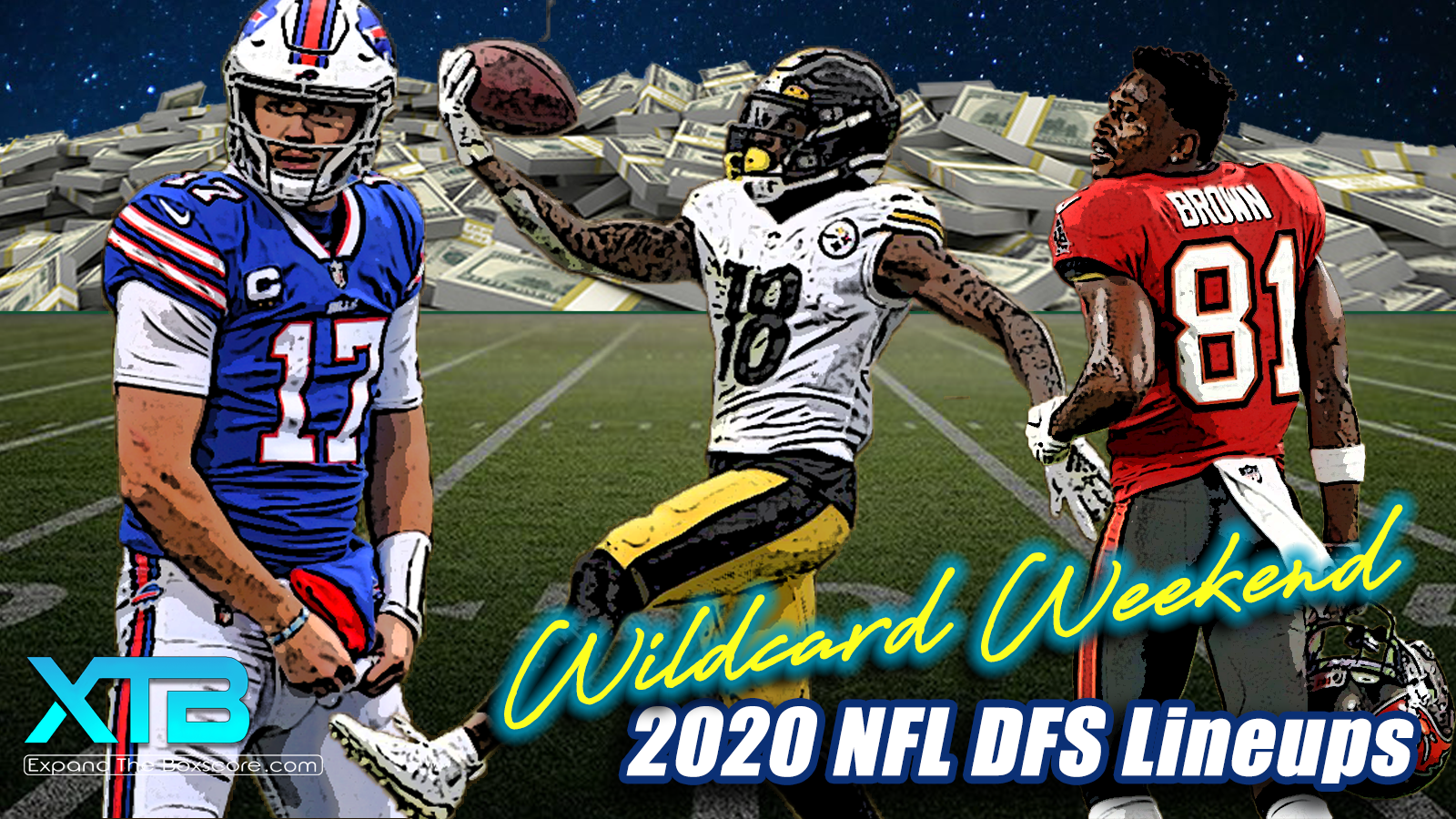 Posted at 13:00h in DFS by Rolando Gonzalez
0 Likes
Share

The playoffs have arrived and with it are some must play DFS matchups that cannot be overlooked. We have got a couple divisional matchups to keep our eyes on and a must see tv rematch from earlier in the year. So let’s get to it, here are my DFS must plays for Wildcard weekend!

NOTE: DraftKings and FanDuel are doing two slates for Super Wild Card weekend as opposed to one larger slate.

The Buffalo Bills have found their next superstar quarterback in Josh Allen and have a legitimate chance at returning to the Super Bowl for the first time in 25-plus years. The #2 seed in the AFC, the Bills play host to the seven seeded Indianapolis Colts. So far this season Josh Allen has shown that he lead the Bills deep into the playoffs, and is also an elite quarterback in this league and an MVP candidate for years to come.

Josh Allen’s incredible finish to the season lead him to be fantasy’s number one quarterback averaging almost 25 fantasy points per game. Now that the playoffs are here, I expect Josh Allen to turn things up even more and will carve up the Colts defense. The Colts have shown they are vulnerable to teams with a heavy passing attack.

Late in the year the Colts defense gave up over 20 fantasy points to quarterbacks Deshaun Watson, Ben Roethlisberger, Ryan Tannehill, and Derek Carr, all of whom had great success throwing down field. With this game being the biggest of Josh Allen’s career so far, I have no doubt that he will show that the Buffalo Bills are the team to be beat in the AFC.

I have Allen throwing for over 350 yards and four touchdowns against Indianapolis on Saturday afternoon.

I am rolling with Los Angeles Rams running back Cam Akers this week as they take on the Seattle Seahawks. Rams rookie running back Cam Akers took over lead backfield duties late in the season and with quarterback Jared Goff likely out for this game, he will be leaned on even more to carry this offense further into the playoffs.

Seattle’s defense has been playing lights out as of late and for the Rams to make things easier for quarterback John Wolford, I see head coach Sean McVay calling up some simple checkdowns and swing passes to get Akers in space and rely on his elusiveness and breakaway speed.

The Rams will have a tough go of it Saturday afternoon but if they can get Akers and their running game going, they can pull off the upset against Seattle. I have Akers going for 75-plus yards on the ground and another 50-plus receiving with a couple of touchdowns.

Antonio Brown is back to his old ways again and is about to dominate in primetime against the Washington Football Team on Saturday night. AB is no stranger to having big time performances in big games, but if Tampa hopes to move the ball against this tenacious Washington defense, Brown need to be at his best with fellow Tampa Bay receiver Mike Evans’ availability for the game in doubt with a knee sprain.

Over the last few weeks, Tom Brady is starting to feed Brown with 27 targets over the last three games. In that span AB has scored at least one touchdown in each game. Last week against Atlanta the Brady-to-Brown connection was in full swing as Brown finished with 11 catches for 138 yards and two touchdowns.

I expect the connection to not only continue but to get even better. I have Brown exceeding last week’s stat line and going off for 12 catches, 150-plus yards and another multi-touchdown touchdown game.

Logan Thomas is a no-brainer DFS play for me come Saturday night. Thomas is making a name for himself this season as he has been an unstoppable force over the last six weeks. Going back to Week 12, Thomas has scored double-digit fantasy points in each game, averaging nine targets per game.

If Washington stands any chance of keeping up with Tampa Bay’s high-powered offense, they will need one of their top weapons to produce and have a career game. Washington quarterback Alex Smith knows what kind of weapon Thomas has become. He has been a dominant blocker, route runner, and has had a knack for getting himself open.

Thomas will continue his hot finish to the season and will go for 10-plus catches for 100 or more yards and another touchdown. Tampa’s defense will definitely have their hands full trying to cover Thomas on Saturday.

A couple more players to fit in your DFS budget on Saturday is Seattle wide receiver Tyler Lockett and Colts running back Nyheim Hines. Los Angeles will have superstar corner Jalen Ramsey covering D.K. Metcalf which should lead to more open looks for Lockett. Hines and the Colts will be playing from behind against Buffalo, which increases his chances to have a monster workload in the passing game.

Ryan Tannehill is my guy this Sunday against the Baltimore Ravens. Back in Week 11 these teams faced off against one another, with Tennessee winning 30-24 in overtime. Tannehill scored over 20 fantasy points in the contest, but this time around in a win or go home showdown, I expect Tannehill to have to do it all in order for Tennessee to win.

Baltimore has made it known they must keep Derrick Henry in check and force Tannehill to beat them with his arm. Tannehill is more than capable of doing so as 300 yards passing and three touchdowns will be coming on Sunday. I have Tennessee winning the game, but the only way the will get the better of Baltimore is if Tannehill can come through in the clutch and make the big time throws.

Tannehill will not break the bank for your DFS lineup and has a more than favorable matchup against the Ravens secondary. Give me the Titans in a close one and give me Tannehill to lead my lineups to victory on Sunday.

Kareem Hunt is my spicy play of the weekend. Nick Chubb gets all the attention in the Browns rushing attack but I am banking on Hunt to be the ‘X’ Factor in this one. I have a strong feeling Browns head coach Kevin Stefanski will pull out all the stops in this one (in spirit) and he will give Hunt ample opportunities in both the run and passing game.

I have got Hunt having 50-plus rushing yards, five-plus catches for 50-plus receiving yards, and a pair of touchdowns. Hunt is Cleveland’s do-it-all Swiss Army knife weapon lining up everywhere in offensive formations. I am going with Cleveland in the upset of the weekend as the Browns will advance to the divisional round of the playoffs.

You need a little spice now and then to have success in DFS and Kareem Hunt is the perfect amount.

Diontae Johnson is about to go off Sunday night against the Cleveland Browns. Pittsburgh is no stranger to the postseason as this will be their 11th trip to the playoffs in Big Ben’s career. This season the Steelers have had many ups and downs, but one constant was when Diontae Johnson is healthy, he has been by far the number one receiving threat for Pittsburgh.

Johnson had a massive 144 targets and missed over two games due to injuries throughout the middle of the season. That is top five volume at the wide receiver position and it should not go unnoticed. Ben Roethlisberger knows that Johnson is electrifying with the ball in his hands and in this Wild Card matchup he will need him to be in order to get the ‘W’.

I have Johnson stuffing the stat sheet with 10-plus catches for over 125 yards and a touchdown in this one. Cleveland-Pittsburgh is my game of the weekend in what should be a hard fought, old school AFC North grudge match.

Mark Andrews is in for a big day against the Tennessee Titans defense. The two faced one another back in Week 11 where Andrews went for five receptions, 96 yards and a touchdown. It is well known that Baltimore is a run-heavy team but Titans head coach Mike Vrabel has a knack for slowing down opposing teams’ strengths.

I fully expect for Ravens quarterback Lamar Jackson to have to let it rip more than usual in order to move the ball on Tennessee. As Jackson’s number one target, Andrews has an opportunity to really light it up in this advantageous matchup. His size, strength and speed will give Tennessee fits the whole game.

Andrews is the definition of a matchup nightmare and head coach John Harbaugh will have no problem drawing up plays to get his star tight end the ball. I have got Andrews going for 8 or more catches for 100 yards and a score. This one has the makings of a shootout and for Baltimore to not be one-dimensional all game long, they will need Mark Andrews to be the difference maker.

Jimmy Graham has been a red zone beast for the Bears and in order for them to hang in with New Orleans’s high-powered offense, they will have to execute in the red area. Also an added bonus, it is a revenge game for Graham against the Saints.