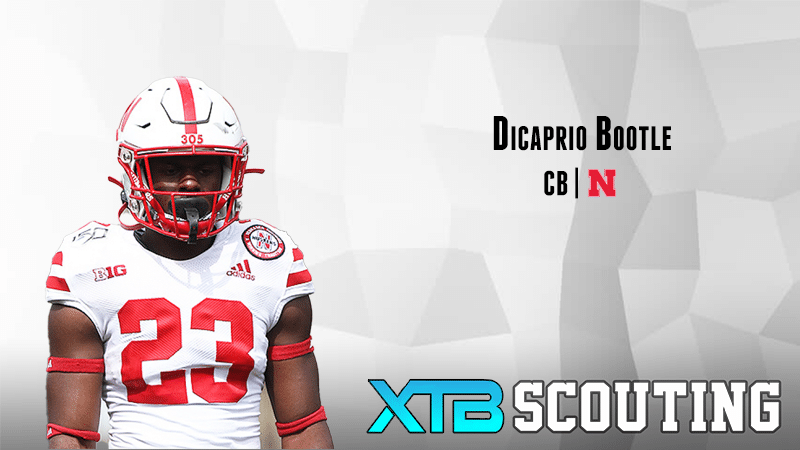 A former 3-star recruit, DiCaprio Bootle has appeared in 36 games for the Huskers since his redshirt year in 2016. As a freshman, he did not get too much work, bursting on the scene as a sophomore. He totaled 15 pass break ups in only 12 games, which ranked Top 10 in the nation and first in the Big 10. As a junior, he expanded his positional role and played four of the 12 games at safety. Thus far, he has not tallied an interception but is in good company with his 22.6 forced incompletion percentage. Bootle’s skillset is a main focus of the Huskers 3-4, press and off-man heavy coverage scheme.

– Redirects receivers well off the line as a jammer with good strength, body control and scrappiness
– Disciplined edge setter in the run game who is willing to stick his nows in the fan
– Confident player and fierce competitor in coverage. Will bounce back from allowed receptions and mistakes
– Very good hand-eye coordination and timing to knock the ball from receivers hands
– Shows an effortless back pedal and patience with his hips
– Above average straight-line speed to keep hip-to-hip with receivers in man coverage and stay in phase
– Decent ability to mirror and match routes in man coverage due to his sufficient change of direction ability

– Lacking ball skills and tracking ability. Prefers to make a play on the receiver rather than turn around, locate and play the ball. This leads to unnecessary DPI calls deep down field
– Tendency to over pursue due to lack of awareness in the run game
– Struggles to recognize routes while in zone, leading to his closing pursuit being a tick slow
– Unsafe and erratic as a tackler. Will fly into players, even colliding head to head numerous times. Lacks any tackling technique
– Inconsistent ability to shed blocks due to lack of brute strength and length

Bootle has the size and tenacity fit the slot ideally, but his merely adequate change of direction suggest he should play on the boundary. His ability to toggle between both spots may make him attractive to man-coverage and press-heavy teams looking for a versatile depth piece in the secondary on Day 3.

Bootle has struggled to stay disciplined and excel in zone thus far in his career. If he can refine his ball skills and tracking, he will accrue less pass interference penalties. The bigger question is if he can prove himself in zone coverage, or if he’ll be limited to primarily man at the next level. As for his tackling, Bootle will need to relearn the technical aspects and play safer and smarter as his tenacity costs him more than it benefits him.