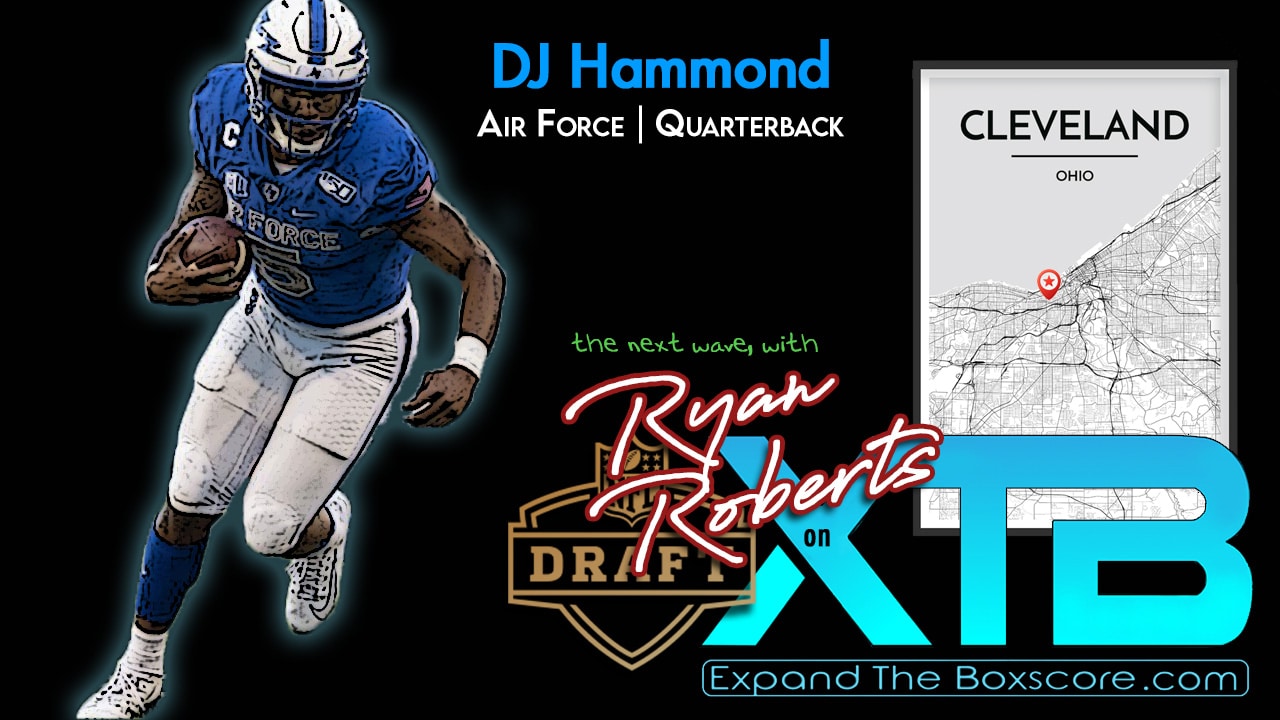 21 Apr DJ Hammond: The 2021 Developmental Quarterback to Have

“If you can play, the NFL will find you.” Talent has a way of rising to the top. Donald Hammond III is the 2021 Developmental Quarterback to have. With some last-minute work for the 2021 NFL Draft, evaluators are in constant search of “diamonds in the rough”, a player to “pound the table for” (insert every other scouting cliche you can think of). Siting as an atypical Quarterback prospect, former Air Force signal-caller Donald “DJ” Hammond III is unfairly stereotyped as your run-of-the-mill triple-option Quarterback. The minute you hear that phrase, common assumptions come to mind.

All of which severely undervalue the type of talent that Hammond possesses. This is not your typical triple-option Quarterback. So why the Academy? How did this talented passer end up here?

“Just fell in love with the Academy,” Hammond explained. “I wanted to be an Aeronautical Engineering major so it was more than just about football for me.”

From a football perspective, the offense may not have ever fully highlighted his skill set as a passer, but that didn’t scare away Hammond. For him, his talent transcended perceived limitations for his development.

“Football-wise, I knew my abilities,” Hammond said. “I know I had the abilities to adapt to any offense.”

After not seeing any game action as a true freshman, Hammond got his feet wet in 2018 as a part-time starter. In a limited capacity, the talented signal-caller provided evidence of his dual-threat skill set, combining for 14 total touchdowns through the air and on the ground (nine total scores rushing). That season would set the table for Hammond, becoming the full-time starter during the 2019 season, quickly developing into one of the more talented option Quarterbacks to have been seen in some time. Usually encapsulated by rushing output, Hammond showed off big-time ability as a passer during his Junior campaign. While leading Air Force to a remarkable 11-2 campaign, including a 31-21 victory over the Washington State Cougars in the Cheez-It Bowl, Hammond proceeded to reset the record books. He did your typical work from an option Quarterback, remaining a cool customer and decision-maker off of the read, accounting for 553 rushing yards and 13 scores. A respectable mark for the system, no matter the impact on the passing game.

As a passer is where Hammond completely proved the assumption to be false. While throwing for 1,316 yards and 13 scores might not blow the box score scouts out of the water, it was his peaks that caused pause for the evaluation. His game against New Mexico in particular encapsulated the upside for Hammond. A part of a 44-22 dismantling of the Lobos, Hammond would put up a performance for the ages, throwing for 327 yards and four touchdowns on just 9-10 passing. That single-game passing yardage total sits as the most by a Falcon Quarterback since Dave Ziebart in 1976.

After that stellar Junior season, a lot was expected of Hammond going into his encore performance. The COVID-19 pandemic, like most collegiate athletes, threatened to ruin the end of the story. After a continuously unsettling chain of events, the Mountain West conference opted to return to action in early October a part of an abbreviated season. Even when the Falcons did return, their record-setting Quarterback was not set to lead the team. Dating back to a report in July, the school reported that Hammond was “no longer a cadet in good standing.” Without many details naming it to the surface, naturally, people start to speculate while assuming the worst. Hammond went into detail about his ending with the program.

“I ended up getting dismissed from the academy for an academic violation. Since it was the end of my junior year into my senior year, I have to momentarily reimburse the government.”

A tough situation for any player, especially with the trials and tribulations that the pandemic brought, Hammond looked on the bright side. It instead offers flexibility for what had been a dream for a long time.

“It did give me the flexibility to pursue my NFL career,” Hammond explained. “If I would have still been a part of the academy, it’s possible that I would have had to wait two years before having the opportunity at the NFL.”

That option made ultimately the decision for Hammond. After a carefully thought out process, he would opt to chase his dream. Another blessing in disguise, Hammond was presented the opportunity to perfect his craft as a quarterback with one of the best in the business.

Coach Avery specifically has garnered a reputation as one of the top quarterback coaches in the country. Working with players like Deshaun Watson (Houston Texans) and Jalen Hurts (Philadelphia Eagles), as well as 2021 NFL Draft prospects Justin Fields (Ohio State) and Trey Lance (North Dakota State), the opportunity for Hammond to test his talents against some of the best has been a huge reassurance for how talented he is in his own right.

“I’m a competitor. I think I can stack up against anyone.”

Hammond mentioned Lance several times, revering the talented quarterback for his abilities. By all accounts, DJ has proven in a short amount of time that Lance isn’t the only talented 2021 quarterback that Coach Avery is tutoring. From a talent perspective, Hammond can stack up with anyone. The finer elements of playing the position is what has been the highest point of emphasis throughout his training.

“It’s been amazing,” Hammond said. “From just the first couple of sessions, I saw a huge improvement.”

You will hear most quarterbacks and coaches alike speak about a player’s base a ton. Keeping a solid platform, remaining in rhythm, keeping your upper and lower body connected are all common terms associated. For Hammond, that attention to detail has been paramount.

“My footwork wasn’t where it needed to be. If your feet are right, your accuracy is right.”

With clear eyes towards the 2021 NFL Draft, Hammond has a chance to make a transition that has historically not been favorable for triple-option quarterbacks. In fact, if he would hear his name called on one of the three days, he would become the first quarterback to be drafted from the Air Force Academy in history.

Former Navy quarterback Roger Staubach is the poster child for quarterback success coming from a military academy. Even with his obvious success, the hurdles that surround players from military schools have historically been laborious. Since 1950 in fact, there have been just seven military academy quarterbacks selected in the NFL Draft, including Staubach and Malcolm Perry (who was not drafted to play quarterback on the NFL level). Of those seven quarterbacks, Staubach was the highest-drafted, coming off the board with 129th overall selection in the tenth round of the 1964 NFL Draft by the Dallas Cowboys. Excluding Roger “the Dodger”, former Army signal-caller Arnie Galiffa was the only service academy quarterback drafted to attempt a pass in the NFL, to the tune of 183 total yards, one interception, and five interceptions. There has been a long drought at the position excluding Malcolm Perry, dating back to former Army quarterback Ronnie McAda being selected in the 7th round (249 overall) in the 1997 NFL Draft by the Green Bay Packers. Hammond hopes to end that skid in just a few days. With the rule passed prior to the 2020 NFL Draft, more opportunity has been afforded to service members, allowing them to pursue their athletic careers. This rule plays heavily into the modern-day athletes’ favor, offering opportunity and optimism for the talented Air Force signal-caller.

With subtle confidence, Hammond laid out his belief that that chance is firmly in his grasp.

“I know what I can do,” Hammond said. “I believe I have one of the strongest arms in the 2021 NFL Draft. Combine that with my athleticism, I don’t see why a team wouldn’t take a shot on me.”

The talent level pops off of the film immediately. Let’s appease the common perception around triple-option quarterbacks for a second. Yes, Donald Hammond III is an excellent athlete. He is equally as fast as he is physical. Hammond is a durable runner who has more than enough chops to give teams fits outside of structure. With a nose for the end zone, he is able to find running lanes to cash in on opportunity.

Oh and he can absolutely operate on the vertical third of the field. The ball comes off his hand clean, seeing the ball explode off his hand. In terms of pure arm strength, both in terms of velocity and distance, Hammond is among the most gifted passers in the 2021 NFL Draft class.

Teams have shown the propensity to take gambles on talent level later in the draft. Donald Hammond III has more than enough to warrant a late-round selection. At worst, he has the talent level that will get evaluators excited to get him into a camp. From there, it is on Hammond to make good of that chance.

As is the case for most players on the college level, the opportunity to play professional football has been a dream for a long time. It’s crazy to think that a childhood dream is about to come true, especially among the ranks of who was Hammond’s childhood hero growing up.

“Cam Newton has been my favorite for a long time,” Hammond said. “Growing up, especially as an African American quarterback, I’ve always looked up to him.”

In just a few short days, Hammond’s path will be a lot more clear. As it stands, his talent will offer opportunities on the next level. People are always in search of sleepers on Day Three. Donald Hammond III is the developmental quarterback to have on Day Three. The talent is all there. It is now just about cultivation.