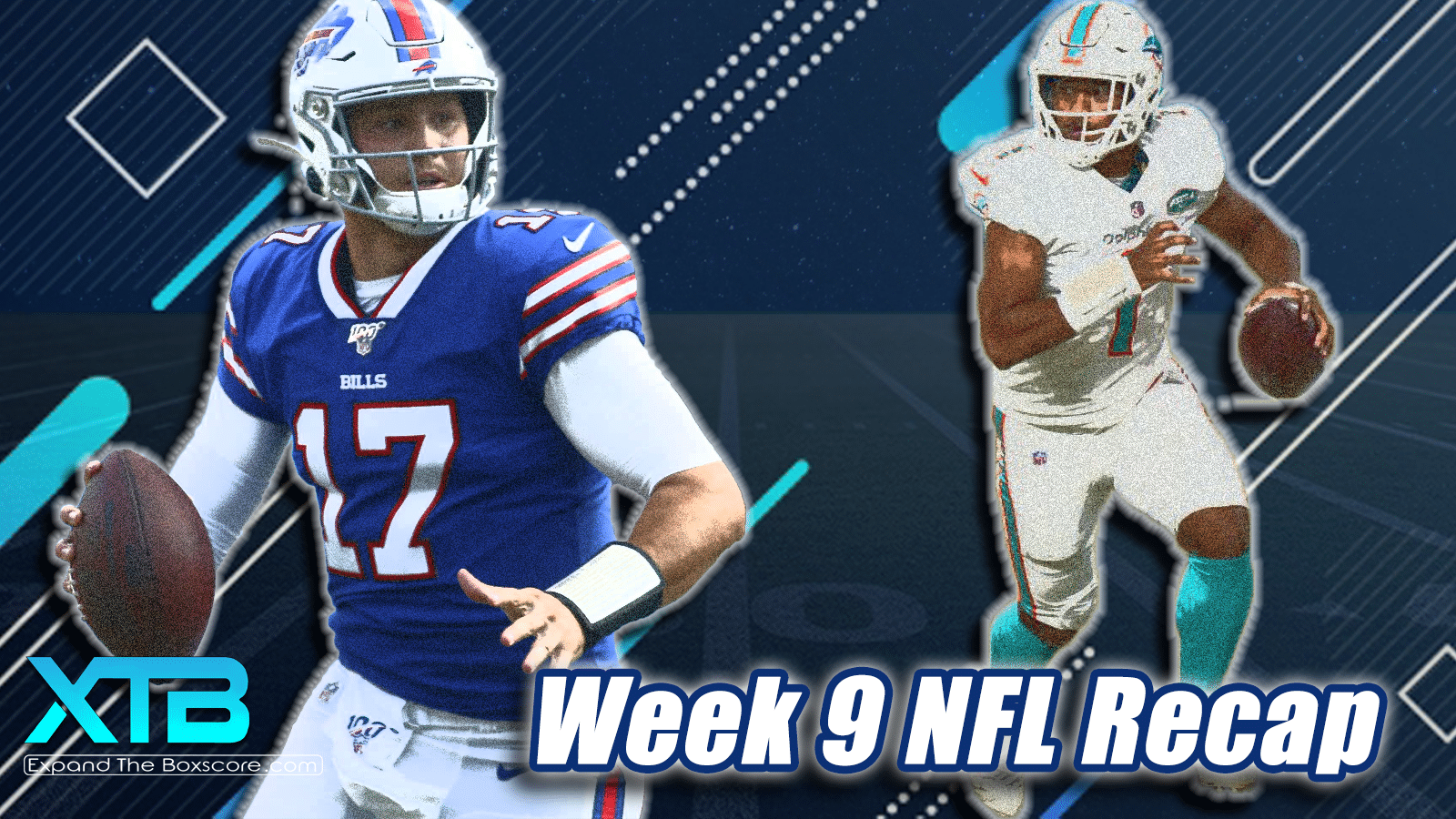 The last week has felt like a 19-play opening drive that lasted eight minutes (but 500 in real time). America was the opposing quarterback, waiting…waiting…until finally results were given. America could do nothing but sit back and watch John King on CNN or Steve Kornacki on MSNBC, just like Tom Brady had to sit back and watch Drew Brees destroy the Bucs on Sunday Night Football.

Congrats on surviving Election week! On to the Week 9 recap.

Bruce Arians flat out got outcoached by Sean Payton last night. As the Bucs hit a field goal late in the fourth quarter to save the embarrassment of being shutout, I thought three things:

Christian McCaffrey looked absolutely ready to come back yesterday, with 69 (nice) rushing yards and a touchdown. He added 10 catches for 82 yards and a touchdown, totaling 151 yards and two touchdowns. The guy is a freak, and the Carolina Panthers could have beaten the Chiefs if not for their inability to stop the passing attack from Patrick Mahomes.

In my opinion, the Chiefs should be the most feared team in the NFL. It does not matter if their defense plays good or not, they always have a chance with Mahomes.

The Jets play the Patriots on Monday Night Football. SPOILER ALERT: the Patriots should win convincingly. How did the Jets win without playing? The Giants, Texans, and Vikings, and Falcons all won, cushioning the Jets lead for the first pick in the NFL Draft. The only teams truly in the race for Clemson quarterback Trevor Lawrence right now is the 0-8 Jets and the 1-7 Jaguars. I have to imagine Jags fans regret winning Week 1.

The Buffalo Bills absolutely heard all the smack talk about them, and decided to completely ruin Russell Wilson’s dream season. Wilson had two interceptions and by halftime the Bills led 24-10. The Bills defense really showed up in the first half to give the Bills a chance at creating a large lead. Buffalo never wavered in the second half, going score-for-score with the Seahawks and eventually winning 44-34.

Parity in the NFL has never been better, as you can make an argument for about five teams being the “best” in the NFL this year. Buffalo is a legit contender and should be taken seriously among AFC teams.

The Miami Dolphins are what an average team with an above average coaching staff can be – a disciplined football team that creates turnovers and gives their offense a shot at winning. Not only did the Dolphins beat the Cardinals, but they consistently were able to get huge stops versus Kyler Murray. Get on the Dolphins train, because the next stop could be the 2020 Playoffs.

Ironically, they could still end up with a top 10 pick as they own the Texans first round pick in the 2021 NFL Draft.

The Las Vegas Raiders barely won as they gave up a game-winning touchdown on the last play of the game, but was ruled incomplete after review. This is back-to-back games the Chargers have lost on the final play of the game and man do I feel bad for those fans. The Chargers never have a normal ending to a football game.

Meanwhile, the undefeated Steelers were losing to the Dallas Cowboys for most of the game due to missed/blocked extra points, missed field goals, and trick plays from the Cowboys. Garrett Gilbert was able to do almost enough to beat the Steelers, but at least the Cowboys showed they are not going down easy the rest of the year. I think the Steelers can be a Super Bowl team, but I am not convinced they are the “best” team in the NFL. Not yet anyway.

Nothing special to talk about other than that these two got the win. The Packers have to get healthy, and the Ravens need to change this up offensively. No one can deny that Lamar Jackson and the Ravens offense does not look like last year’s offense. It is Week 9, and if they are going to be serious, they have to be more successful on offense.

Drew Lock played like a top QB yesterday, while CMC in his return from injury went off. There is still value to be found on bad teams, such as wide receivers Terry McLaurin and Justin Jefferson. Chris Carson should return soon so that a plus for Seattle, although Tyler Lockett had a down performance compared to Week 8.

Antonio Brown (I picked him up in two leagues) had a boring performance but still could be a key pickup down the line. There is just too many options in that offense. There is no guarantee of any of them going off. If you are looking to pick up a defense, go grab Miami if they are still available.

I mentioned how the Jets and Jags are in a race for Trevor Lawrence. That gives me some space to talk about BYU QB Zach Wilson. If you have not heard, the kid has got a damn good arm. Could Wilson jump Justin Fields as the second best quarterback in the draft? Probably not, but Wilson is on NFL team’s radars: throwing for 2,511 yards, 21 touchdowns and only two interceptions so far.

Wilson’s completion percentage went up from 62.4% in 2019 to 75% in 2020. He casually has eight rushing scores as well. Wilson will be drafted in the first round, so if you think your team needs a new player under center, go to YouTube and start watching Zach Wilson highlights on repeat.

The most comprehensive college football stats can be found using XTB’s College Football Statistics tool. Every player. Every game. All at the click of one button.

Last week it was Russell Wilson over everyone else. This week, I am going to pull a full 180 and say Patrick Mahomes in the front-runner for the MVP award. Look, this race is just starting to heat up and we have a long way to go, but Mahomes is doing things only he can do and making it look so easy. Sorry Russ, I have to go with the best player in the league.

Next time you make a sandwich, use a bagel instead of bread. Toast that bagel, make the sandwich, and thank me later. Thanks for reading the Week 9 recap. Have a great week!