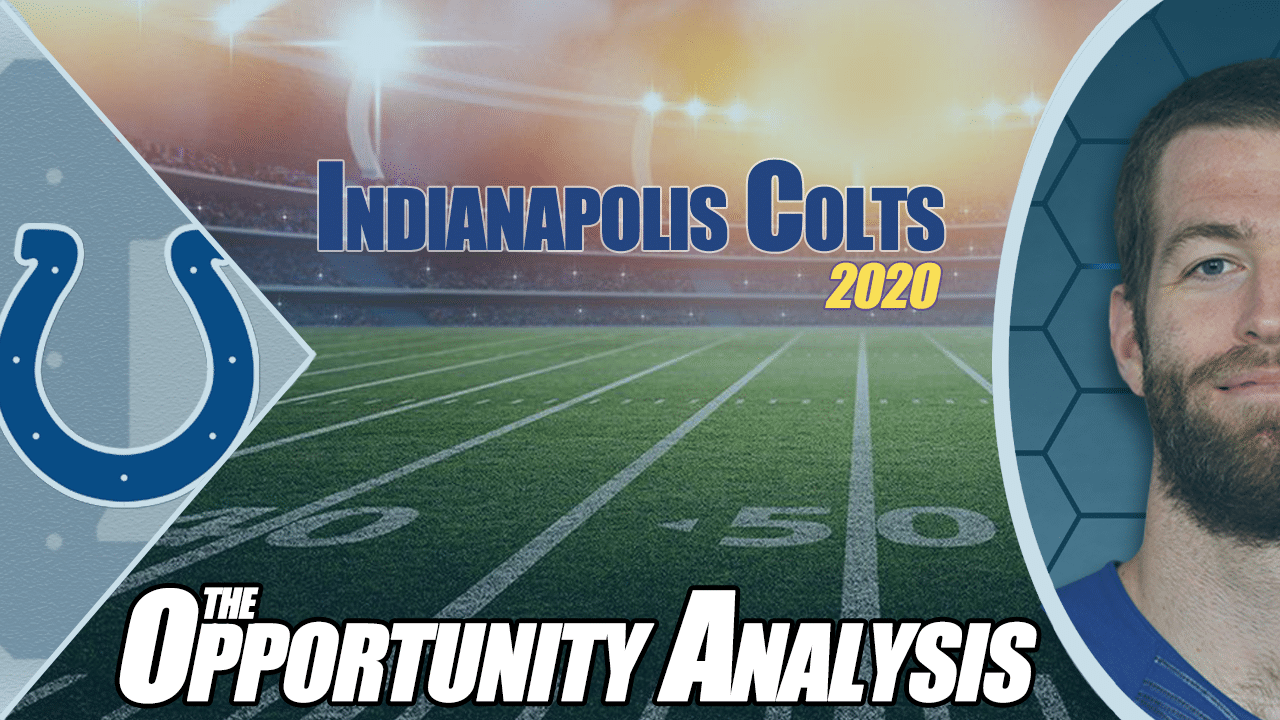 If you haven’t read the article on the opportunity analysis, click here and do so before reading the team breakdowns.

The Colts are number four on the opportunity analysis with over 100 vacated targets. However, the bigger driver for why the Colts are number four in the analysis is the potential growth in drop-backs. Indy is coming off a down year with Jacoby Brissett running the show, but it is hard to fault him as four of his top five passing game weapons missed a majority of the season. That being said, we can essentially throw 2019 out the window as veteran Philip Rivers comes to town as the new starting quarterback in Indy.

Rivers has history with the Colts staff as Head Coach Frank Reich served as his Quarterback coach and Offensive Coordinator from 2013-2015, and Offensive Coordinator Nick Sirianni worked on the Chargers coaching staff from 2013-2017. In the two seasons Rivers played under Reich, the Chargers saw an average of 674 drop-backs, which is significantly higher than the Colts 2019 drop-backs of 578.

Those numbers reflect what is in the opportunity analysis as the data is calling for 653 drop-backs in 2020. This projected increase in pass volume is great news for the Colts pass-catchers because outside of Eric Ebron there are no major weapons leaving Indy in 2020.

T.Y. Hilton has been a WR1 in points per game the last two seasons he operated with Andrew Luck. Rivers isn’t no prime Luck, but Hilton has the ability to operate as an elite wide receiver when he has above average quarterback play. Rivers has supported WR1 value for Keenan Allen each of the last three seasons. More importantly Rivers arrival should breathe life into the deep passing game which is Hilton’s specialty.

In 2019 Rivers attempted a pass of 20 or more yards downfield at a 4% higher rate than Jacoby Brissett, his completion percentage was 7% higher, and those passes resulted in twice as many yards and touchdowns. Hilton himself is still playing at a pretty high level as well. In a lost season in 2019 Hilton still averaged double digit fantasy points in .5 point PPR, and if we remove the one game where he played well below 50% of snaps his, points per game was over 11. Even after dealing with injuries most of the season Hilton still flirted with top 30 value in yard per route run (min 50 routes).

Another reason for optimism is Hilton was the wide receiver 28 in fantasy points per team drop-back, which evaluates a players fantasy points based on teams drop-backs per game. This is important because the Colts are expected to see a bump in pass volume which should allow Hilton to easily flirt with top 20 value when healthy. All these factors should benefit Hilton as he is currently going as the WR28 in fantasy drafts as a rock solid third wide receiver target at the 6th/7th round turn.

The Colts are one of the top teams in the NFL that utilize the tight end in the passing game. Indy has been inside the top six in target share to the tight end each of the last three seasons, with two seasons inside the top three. That means the increase in opportunities from our analysis should positively effect a familiar face in the Colts’ offense. In 2016, Jack Doyle became a full time starter, and flirted with TE 1 value that season. However, after 2016 Doyle has been a product of circumstance because in 2017 and 2019 he dealt with subpar quarterback play, and 2018 he was limited to just six games.

Philip Rivers has supported a top 12 tight end in points per game nine out of the last ten seasons. Doyle is still heavily involved as he was second on the team in routes run in 2019 which means he will be on the field plenty for Rivers to feed him targets. Another key aspect about Rivers is how he likes to target the middle of the field. Football Outsiders does a Quarterback slot vs wide analysis each year, and in 2017 and 2018 (2019 is not available yet) Rivers was top ten in percentage of targets and top six in Defense-adjusted Value Over Average which measures success rate when throwing to the slot.

Overall, I expect Rivers to continue to attack the middle of the field, and with Doyle the early leader to pace the team in routes in that area he is a good bet to return low-end TE1 value in 2020.