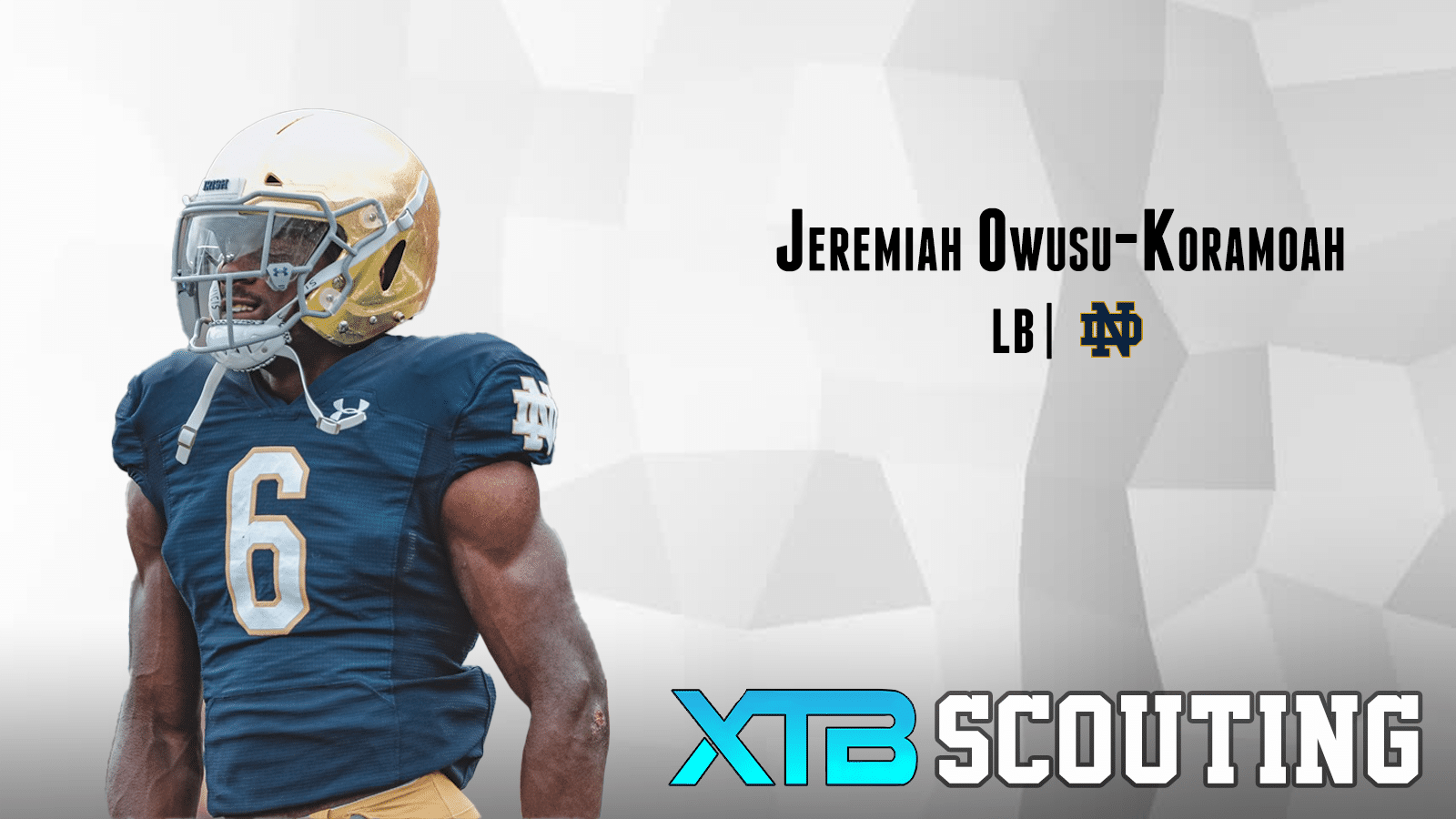 A versatile rover with high-end speed, coverage ability, and blitz acumen who has the tools to become an ideal coverage linebacker if he can bulk up

Jeremiah Owusu-Koramoah came to Notre Dame as a 3-star recruit who redshirted his first season on campus, suffered a season-ending foot injury two games into his second year, and blossomed into an impactful starter as a redshirt sophomore in 2019. He lines up all over the field in Notre Dame’s 4-3 scheme in the Rover role that tasks him with playing in the slot, at OLB, and rushing the passer of the edge depending on the situation. While he’s well undersized by traditional linebacker standards, Owusu-Koramoah’s multi-faceted impact and premium speed give him the looks of a “Big Nickel” or modern coverage linebacker that many teams are looking for.

– Versatile, hybrid player who can play nickel, OLB, or rush the passer off the edge
– Plays with high level reactive athleticism in mirror/match situations. Has shown the ability to stick with TEs, RBs, and some slot receivers in man coverage
– Flashes extremely high-level sideline-to-sideline range in backside pursuit
– Shows solid instincts and the ability to trigger quickly to get downhill once he makes his read
– Productive blitzer who wins with speed and shows the bend necessary to turn the corner
– Navigates through trash seamlessly
– Good pre-snap communicator who gets his teammates aligned and calls out the offensive oppositions’ assignments
– Length and violent hands give him a nice ceiling as a block shedder
– Explosive first step and short-area burst
– Beats blockers to the spot in space consistently and can shimmy around them with great lateral agility

– Not stout at the POA as a strong side run defender
– While his form tackling looks picturesque at times, he dives at ball carriers legs too often
– Needs help over the top when covering true speedsters downfield
– Needs to improve his contain on the edge. Doesn’t squeeze well to limit holes and will occasionally be beaten outside after overestimating his speed and taking poor angles
– Allows blockers to get into his chest too often
– Pass rush arsenal is limited to speed rush at the moment. Ineffective when he tries other moves
– Can lose a step in coverage when he gets lungey trying to throw off the receivers timing

While more conventional defensive coordinators may stay away from Owusu-Koromoah due to his tweener status, forward-thinking coaches will see a way to use him as a third down chess piece with major upside. Owusu-Koramoah’s combination of coverage acumen, blitz production and sideline-to-sideline range will allow him to fill a multitude of roles. And forcing him into a single position will likely limit his overall ceiling. He’ll likely begin his rookie season as a sub-package linebacker and core special teamer, but has the potential to grow into a Pro Bowl-caliber outside linebacker. Expect Owusu-Koramoah to be taken sometime late on Day 1 or early on Day 2 by a team looking to embrace him as a positionless defensive weapon.

Will Owusu-Koramoah prove that he can become a three-down starter by adding play strength and improving as a run defender? If he fails to show that he can be stout at the POA when facing play side runs, it’ll be tough for him to be drafted in the first round unless he becomes a world-beater in coverage. Owusu-Koramoah has a large skillset, and however he sharpens his tackling consistency, block shedding, or pass rush moves will ultimately be quite telling about his potential.