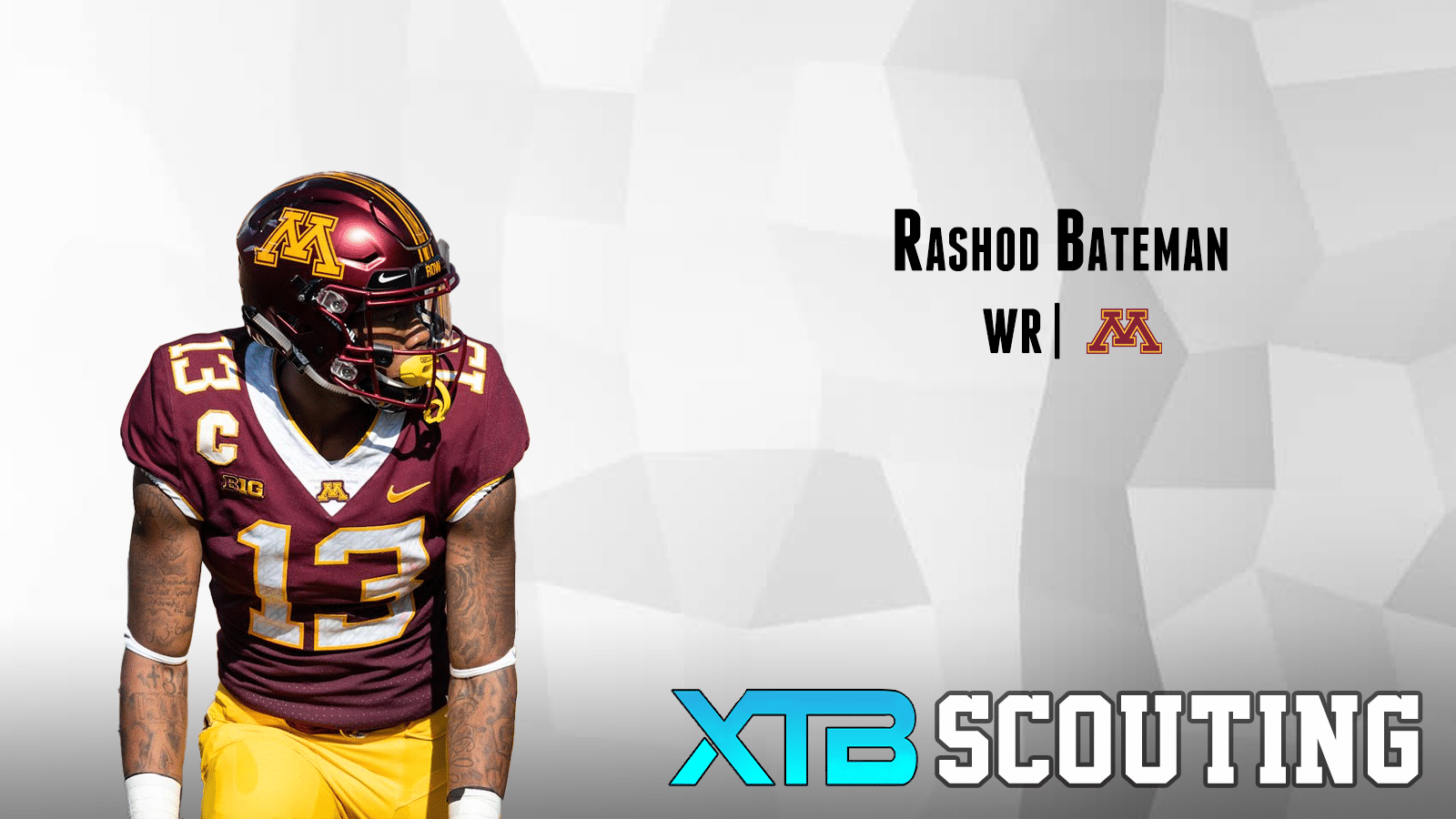 Very good athlete with explosive burst off the line, smooth change of direction, and good body control to box out DBs and come down with contested catches.

Rashod Bateman impresses with his wide variety of release moves and ability to manipulate defenders to create leverage. His patience and change of direction ability allow him to successfully release from press inside or out, pumping his arms hard to prevent the DB from landing hands and altering his route. He keeps his head on a string to fool the defender, which often results in a free release into the defender’s blind spot. Against off-man, he shows very good acceleration off the line to challenge the defense vertically and set up for underneath routes.

A smooth route runner, Bateman’s speed cut is quick and seemingly effortless. His subtle route adjustments allow him to gain optimal leverage before exploding back into space against man coverage, creating good separation. He shows solid deceleration on comeback routes and has the long speed to attack the defense vertically, hesitating before hitting his top gear and racing up field. When facing zone coverage, he throttles down in the seams well and adjusts his break depth to attack the holes of the coverage. He can get knocked off his route or held up by jams, but he often uses his hands well to prevent the defender from landing his hands. Though his speed cut is impressive, he can struggle to get his hips low when breaking down, limiting the effectiveness of his hard cuts.

A natural hands catcher, he positions himself and adjusts to balls well in order to catch under thrown balls within his frame. He shows good tracking ability on deep balls and understands defender leverage to shield the ball with his body. Good awareness allows him to stay in bounds on sideline catches and he uses his body control and strong hands well to box out DBs and come down with contested balls. He can get a bit anxious when anticipating a hit over the middle which can result in the occasional drop.

Instantly transitions from receiver to runner after the catch with good acceleration and the long speed to go the distance. Uses his free hand well to hold off potential tacklers and has the open field vision to complement his change of direction ability.

Bateman will be a prototypical X receiver at the next level, with the complete skill set NFL teams desire. His route savvy, leverage understanding, and smooth change of direction ability will allow him to step in as a WR2 his rookie year. His struggles to get free against jams and average hard cuts may cause him issues against more physical corners, but he has the body control to come up with contested catches. He had a bit of a limited route tree at Minnesota, but showed an ability to succeed at all three levels.

Based on his tape from 2019, Bateman is an unquestioned 1st round selection. What remains to be seen is how his decision to opt out will affect his draft stock. At this point, look for him to go in the middle to late 1st round.

With Bateman opting out of the season, his performance at the combine will weigh extra on his draft stock. With a standout showing in Indianaplis, he could be in the conversation as a potential top 3 WR.