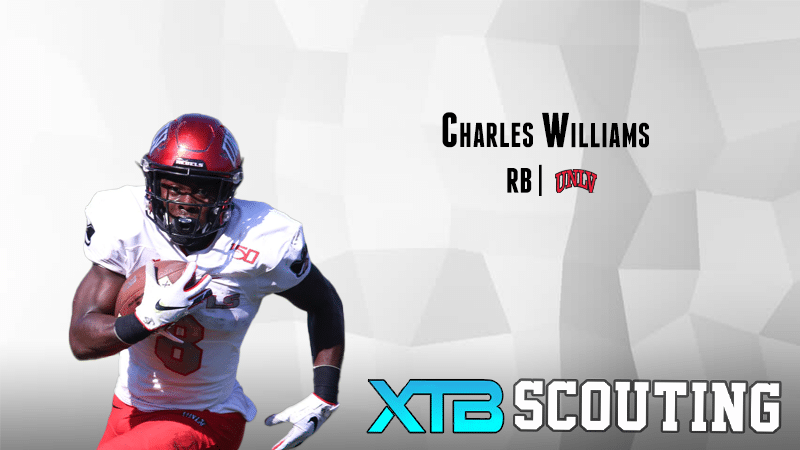 Charles Williams is a bite-sized back with solid production in 2019, but his numbers don’t match up with what he showed on tape. After taking over for incumbent Lexington Thomas as a redshirt junior, Williams was able to make some chunk yardage runs that boosted his average, but from snap to snap he does not present the type of juice or creativity that most good small backs have. He has acceptable vision coming out of the UNLV zone blocking scheme, but he lacks the tools to be a high volume player who grinds down defenses or a dynamic scat back.

– Patience is adequate when he is allowing blockers to set up ahead of him
– Willing to stick his nose in the fan as a pass protector, even when he is outgunned by opponents
– Ability to change directions on short notice is acceptable
– Burst through the hole is fine, albeit not a top trait

– Contact balance isn’t consistent yet, and it leads to a lot of easy tackles for the defense
– Speed in the open field does not stand out for a smaller guy
– Precision and control with his movements is still a work in progress
– Not particularly nimble for his size, and lacks the grace to weave in and out of run lanes smoothly
– Frame isn’t suitable for working in high traffic areas, as he can’t go between the tackles and win with regularity
– Lateral agility does not stand out for the position

Williams projects as an undrafted free agent who will need to impress some teams on the pre-draft circuit to warrant a notable investment. He’s a solid college running back, but doesn’t have the type of traits that will translate easily to the pros. Factor in his lack of pass game ability, and Williams looks more like a camp roster player than a future RB3 or RB2.

A reduced season means Williams will get less opportunities to prove himself in the Mountain West, so it will be key to put his best foot forward and show improved speed and body control throughout the year. A strong output in the year and good numbers at the NFL Combine or UNLV pro day will be a major factor in whether or not Williams can make a bid for being draftable.