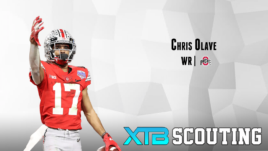 Chris Olave came to Ohio State as a 3-star recruit and became a starter as a true sophomore last season. In Columbus, he’s racked up 60 catches for 1,037 yards, 15 touchdowns, and an impressive 17.3 yards per reception. The Buckeyes used him as a vertical threat in their spread, RPO-based offense. The San Marcos native has the speed to play a similar role at the next level but needs to improve his quickness and play strength at the line of scrimmage to beat press coverage.

– Very good acceleration off the line of scrimmage to eat up cornerback’s cushion against off coverage and force them to open their hips quickly to turn and run against soft press
– On vertical routes, he attacks leverage and gets back on the redline once he passes the defensive back
– Keeps his shoulders down when running curls to help sell the go route
– Against man coverage, he uses a nice head fake and rocker step to create separation on dig and out routes
– Has a good second gear when running drags to break away from defensive backs
– Explosive out of his cuts on posts
– Solid at tracking deep passes
– Impressive body control to drag his feet and secure the catch near the sideline
– After the catch, he has the speed to turn upfield and break defender’s angles
– Uses efficient angles when run blocking to position himself between the ball carrier and defender

– Marginal against press coverage as he’s slow to get his hands up, and lacks the foot quickness and play strength to avoid getting re-routed at the line of scrimmage
– He has similar issues within the five-yard window as he struggles to get defensive backs’ hands off of him without fully extending his arm(s), making him a liability for OPI calls
– Adequate change of direction overall as he takes a while to get in and out of his cuts on 90-degree or more routes
– Struggles to catch balls above his head and in distraction drill situations
– Doesn’t understand scramble drill rules, often runs the opposite direction of where the quarterback is scrambling, and goes deep when he should work back to the QB
– Not much of a YAC guy as he lacks the quickness and agility to make defenders miss, and he goes down on the first contact
– As a run blocker, he’s not physical at the point of attack and doesn’t have the strength to get a push against defensive backs

Olave would be a great fit for a team that either uses a vertical passing attack or is looking for a receiver who can take the top off the defense. The problem is, his struggles against press coverage will scare some teams away, and his lack of change of direction skills will limit his route tree at the next level. Ultimately, the Buckeye projects as a second- or early third-round pick.

With the Big 10 putting its season on hold, it’s a real possibility that we don’t get to see Olave play this year. However, if the spring season does come to fruition, he’ll need to show significant improvement against press coverage. The best way to stop a speed demon is to get hands on him at the line of scrimmage and NFL teams will do this to Olave constantly. If he’s going to sneak into the first-round discussion, he’ll need to improve in this realm.