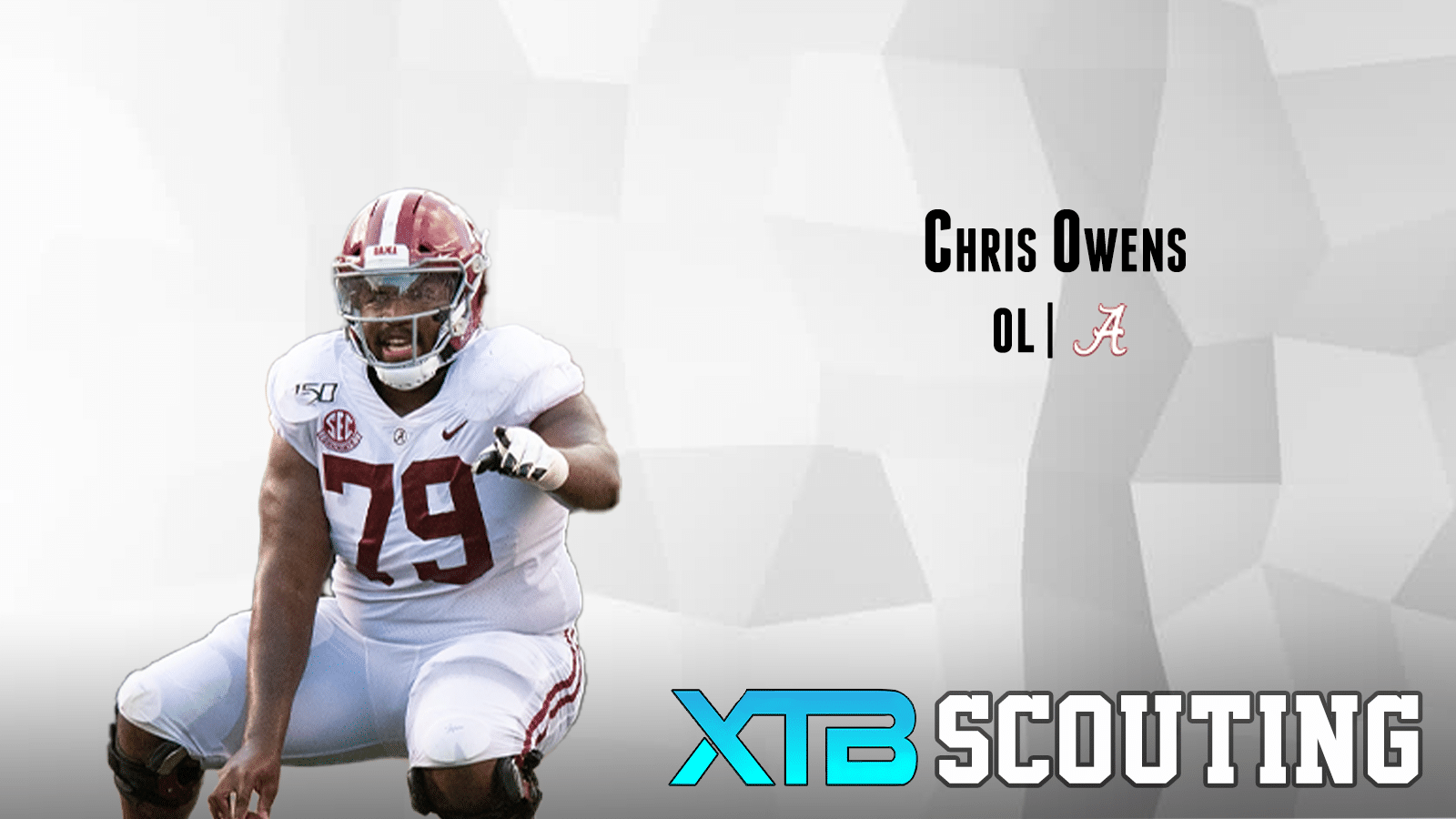 A 4-star recruit and 9th ranked guard in the nation by 247Sports.com, Chris Owens saw his only collegiate starts in 4 games in 2019 at center. Teammate Landon Dickerson eventually took over as a starter in week 7, relegating Owens to a backup role. The talent and seniority that Alabama already had on the offensive line in 2018 was a good situation for the Texas native to learn despite his reserve role. Owens played in a total of 27 games in his 3 years either with the field goal unit, or serving as an extra linemen when he wasn’t starting. Owens has experience on zone and man blocking schemes, and has acted as a puller on occasion showing his quickness. An experienced offensive line should bode well in the SEC for the Crimson Tide to get back on top in 2020.

– Stays hip-to-hip on double teams
– Good awareness and recognition on stunts
– Quickness on reach blocks, and foot speed to get to target at 2nd level and on space blocks. Takes good track to target overall
– Use of drag hand and looks for work when uncovered
– Solid strength in legs to stalemate on down blocks
– Flashes strong latch ability on opponent
– Ideal NFL size and length

– First step on reach blocks, doesn’t get enough width at times
– Constantly lets defender’s get to his chest first with little effort shown to counter. Struggles against length as well
– Anchor, easily pushed to backfield struggling to get feet planted
– No drive and power in legs to widen hole
– Doesn’t show an aggressive demeanor through the whistle
– Plays a bit top heavy often when run blocking, leaning into his opponent. Makes contact with his chest first rather than hands
– Hand placement gets bit wide at times, and lacks pop on his punch
– Lacks core strength to shift defender and pin him away from running back’s path
– Maintaining low pad level at the POA

Owens will likely not hear his name called in the draft, maybe a borderline late day-3 selection at best. He does bring athleticism and solid play strength, and provides scheme versatility in the run game. He also is quick to recognize incoming stunts. However, he’ll need to heavily work on his anchor and use of hands in the passing game to find himself on the offensive line depth chart. Owens could find himself on the special team unit early on, and could eventually see himself be used as an extra run-blocker as he gets better at pass protection. He’ll project as a 3rd string interior linemen by his third season. His best fit is with a team that runs a quick passing game, and helps out their blockers through play action and use of double teams.

The redshirt senior’s experience at center should give him the edge to start again in 2020, although Nick Saban has his options open. If he isn’t named the starter, it will be a steep climb as he’ll only be used as an extra linemen on goal line or short yardage situations, barring any injuries along the interior. To get any consideration at the next level, he’ll need to show improvement on his hands overall, in timing, placement, resetting and garnering power. He’ll also need to show some anchoring ability and get stronger to turn and sustain his opponent, otherwise he’ll be outmatched.