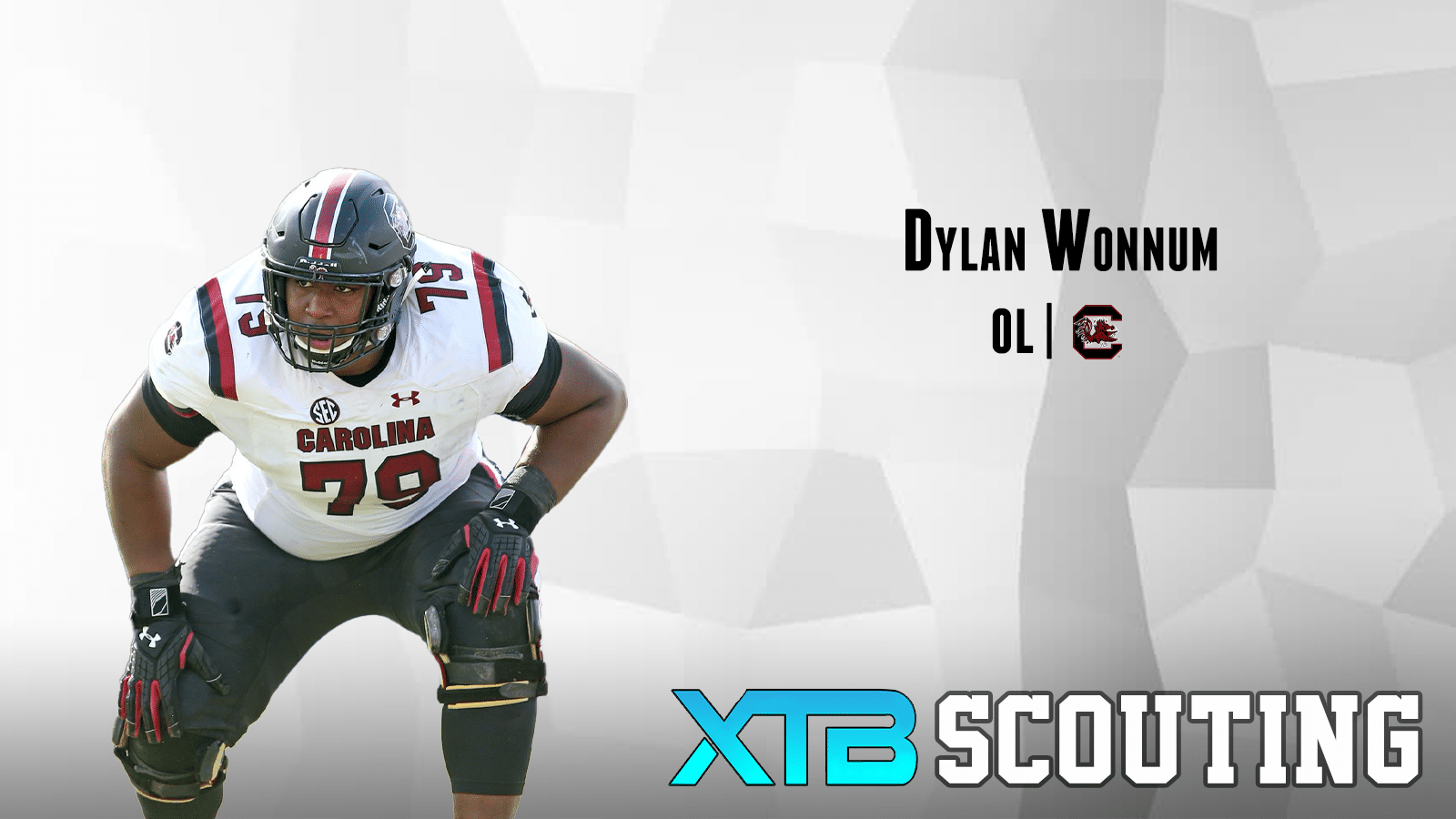 A long framed tackle with a finishing mentality and good strength, but room to improve on the technical side of the game

Dylan Wonnum is the second Wonnum looking to enter the ranks of the NFL after his brother DJ was drafted in the 4th round by the Minnesota Vikings this year. As the right tackle in South Carolina’s spread offense, he has experience blocking in both zone and power schemes against some of the best defensive talent college has to offer. After being named to the Freshman All-SEC and Freshman All-America teams in 2018, Wonnum’s 2019 was hindered by a mid-season injury that all but eliminated any chances of garnering further accolades. The former 4-star recruit and Under Armour All-American looks to get back on track as the 2020 season rolls around, and rise up draft boards in the process.

– Long frame that he compliments with good functional strength
– Flashes the ability to generate drive off the ball and into the second level
– Does not let go once he gets a solid grip onto defenders and keeps them occupied
– Finishing mentality. Wants to take blocks all the way to the ground
– Can drop anchor and stifle power rush in pass protection
– Continually looks for work when uncovered

– Initial punch lacks accuracy and timing, and does not reflect his strength as a result
– Wide hands allow defenders to get into his body and take control
– Get off tends to be slow and lacks hip torque and explosiveness
– Plays with a high pad level that gives up valuable leverage
– On his heels and allows his feet to get narrow during pass sets, allowing top-tier rushers to gain an advantage
– Has a bad habit of bending at the waist rather than his knees
– Will occasionally turn his hips too early in his pass sets, which opens himself up to inside counter moves
– Can struggle against straight speed rushers

Wonnum has the frame and strength to be a contributing backup at the NFL level, but will need polishing in his technique in order to capitalize on that potential. Due to the fact that his run blocking ability is superior to his pass blocking, his home will likely be on the right side of the offensive line. His experience in the Gamecocks’ spread offense will allow him to fit into most zone running offenses, and if he can continually generate drive, he could fit in a power running scheme as well. Run-heavy teams that need to increase depth behind their starting tackles will find him available on Day 3.

Wonnum has traits that NFL front offices will like, but he will need to step up his performance in order to make his way up draft boards. Playing with a lower pad level and bending at the knees rather than the hips will help him maintain leverage throughout the play and generate drive off the line of scrimmage on a more consistent basis. Developing his initial punch to be accurate and on time will be important as well, and will allow him to disrupt defensive lineman at the snap. Technique in his pass blocking will be a big area for improvement, specifically in his lower body. Keeping his feet wider and staying off of his heels will allow him to better combat athletic edge rushers, while not being too quick to turn his hips will help him against the inside counter.