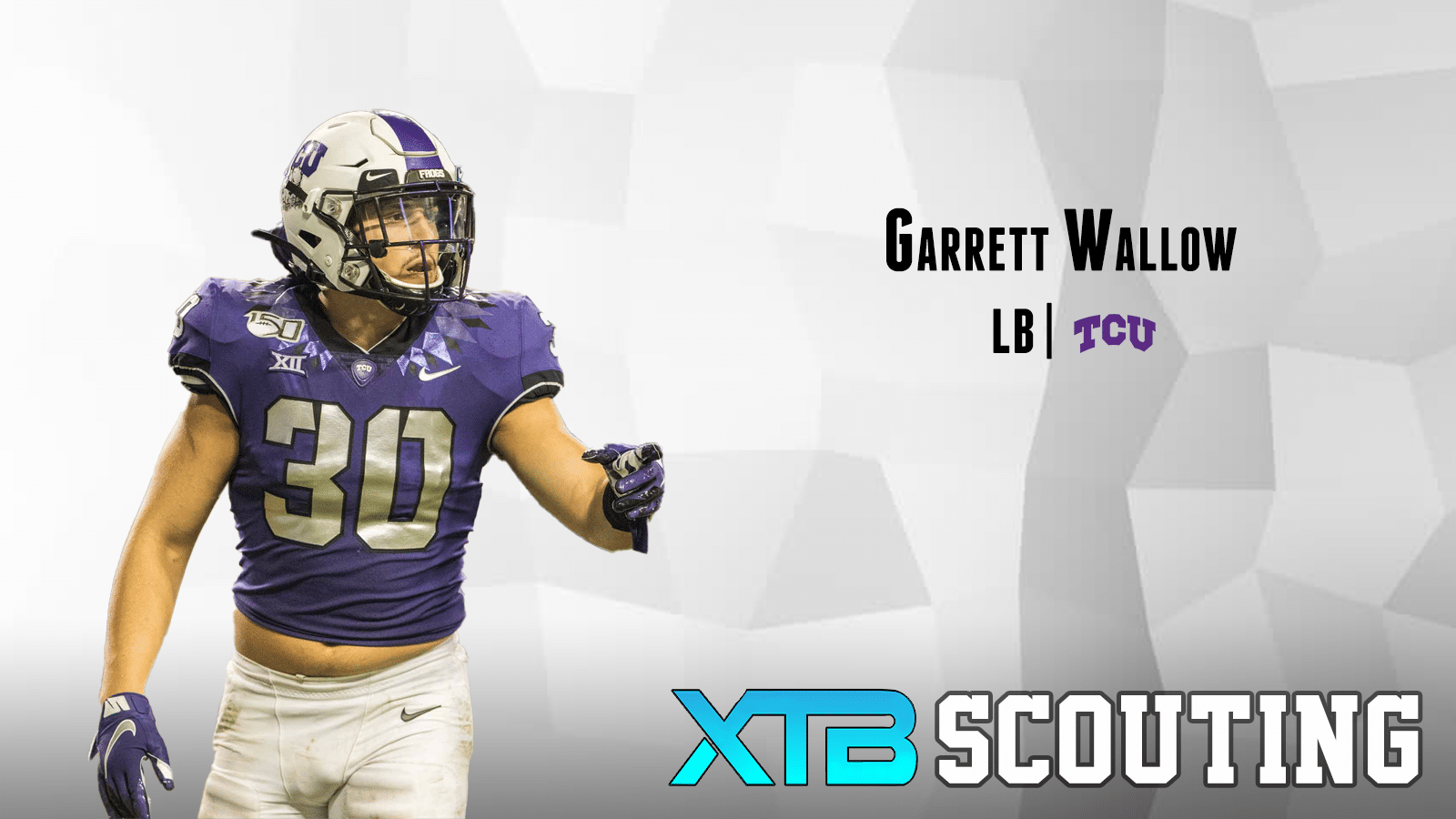 Garret Wallow enters his senior season in Fort Worth with a solid history of production. In 2019, he led the Big 12 in tackles, and was 9th in the country with 125 stops. As one of two linebackers in TCU’s 4-2-5 scheme, Wallow led the Horned Frogs in TFLs and broke the double digit stops mark in seven out of 12 games. He has experience lining up both in the box and in the slot. The former 3-star safety recruit will have a chance to shoot up draft boards with a quality 2020 season.

– Field Marshall. Good communication and makes sure his teammates know where they need to be and what’s happening
– Well-disciplined player. Understands his role in the scheme and gets to where he is supposed to be
– Stout at the point of attack. Stacks blockers at the point of attack
– Rarely misses tackles or has them broken
– Sideline-to-sideline range. Can make plays outside of his immediate area at the snap
– Generates chaos when he blitzes. Blows up blocks from running backs
– Gets to his landmarks and understands what is happening around him in zone coverage

– Can struggle with block shedding if he can’t navigate to avoid the blocker
– Hips are a little stiff in man coverage, which can cause problems against receivers
– On ball production in coverage. Will be in position to make a play on the ball in coverage and fail to intercept or breakup the pass
– Will occasionally give some ground when making a tackle
– Can let his pad level get too high at times
– Turnover creation. Has never forced a fumble and only has 1 interception in his college career

Wallow has the makings of a solid sleeper pick for 2021. He can fill the role of a lower-end starting off ball backer, with a chance to become something more. He can play the Mike or Will linebacker in a 4-3 scheme, and will be best utilized as a Will due to his range and sound tackling. On 3rd down situations he can be used either in coverage against backs/tight ends, or as an extra rusher via blitzes. He fits the mold of the new-age NFL linebacker that is slightly smaller and extremely athletic, so expect NFL front offices to take notice of him. Teams that need a versatile LB to fortify their front seven can pick him up on Day 2 or early Day 3.

Wallow is set for a special 2020 season if he can improve upon his junior year. He will need to develop his man coverage ability, and showcase more active hips when changing direction against wide receivers.  Producing more on ball results via PBUs or interceptions will be something to work on as well. Improving his block shedding ability will be key, and will allow him to make more tackles at or behind the line of scrimmage. Playing with a lower pad level should also help eliminate giving ground when making tackles. Wallow is a name that will potentially rise up draft boards significantly, and will be a player to watch out for as the season progresses.