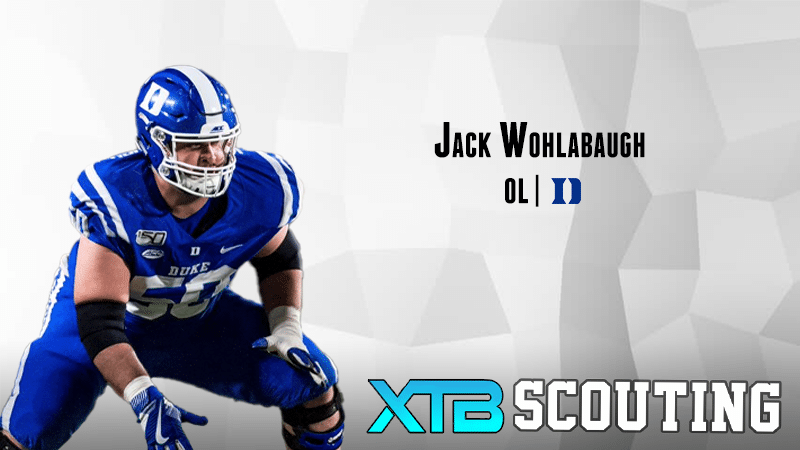 Jack Wohlabaugh is the starting center and a team captain in Duke’s offense. He’s asked to down block on power plays and reach block consistently in Duke’s multiple offense that oscillates between up-tempo spread formations and heavy power sets. Wohlabaugh originally started his collegiate career at Ohio State as a 3-star recruit, but transferred to Duke after too years in search of more playing time. He quickly ascended from reserve to starting center due to injury and became a mainstay at the head of the Blue Devils’ offense. Wohlabaugh’s has NFL bloodlines as his father had a 9-year NFL career on the line.

– Sets a powerful anchor with ideal knee bend and adequate ankle flexion
– Does well to help out guards with a powerful drag hand
– Very good hand placement and timing. Consistently hits his aiming points
– Smooth, quick footwork and reactive athleticism to shift direction at a moment’s notice
– Persistent blocker with a good motor who is constantly finding work
– Climbs from double teams with urgency and is effective at getting in the way of defenders at the second and third level

– Tendency to let his pads get too far in front of his toes as a run blocker, resulting in a loss of balance far too often
– Has trouble with staying square to defenders and takes some poor angles as a run blocker. Saps some of his second level effectiveness
– Range is merely sufficient. Effective getting out in space on screens, but has some trouble with reach and scoop blocks
– Doesn’t attempt to latch onto defenders to sustain as a pass blocker very often. Simply pushes them back and keeps them off him
– Shows decent hip roll, but doesn’t generate much vertical push on run blocks unless he’s double-teaming

Wohlabaugh projects to be a Day 3 selection who brings above average pass blocking acumen to an offensive interior. He will be able to toggle between guard and center at the next level, and will be best suited for a backup center role early in his career due to his issues with balance and propensity to take poor angles in the run game. Wohlabaugh will fit best in a gap-scheme due to his ability to chip off double teams and effect the second level and his merely sufficient lateral range on reach blocks. He’ll be most valued by teams that value pass blocking over all else due to his strong anchor, reactive athleticism, and accurate hands.
Wohlabaugh could be a riser in the process if he can prove to teams that he won’t be a liability as a run blocker at the next level, but limited proactive athleticism and a propensity for losing his balance while run blocking will give teams pause about bringing him in. His pass pro chops are very well developed and are NFL-ready, giving him a high floor and potentially a low ceiling at the NFL level as a pass protection specialist.