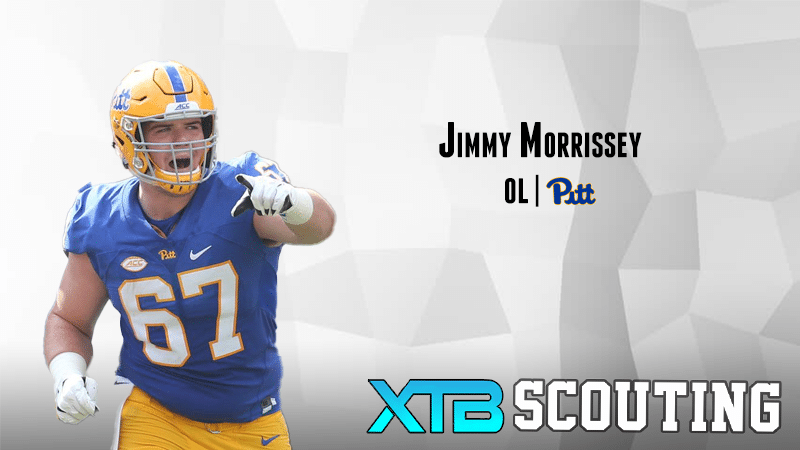 Jimmy Morrissey joined Pittsburgh as a walk-on in 2016, ultimately redshirting. The following year he won the starting center position, kicking off his 23 straight game starting streak, an injury ending his sophomore campaign early. Coming back as a junior he would start all 13 games and be named team captain. Morrissey has been key to the Panthers pass first, zone run offense being one of the highest rated lineman in both facets of the game.

– Looks for work when left free
– Reads the game well. Rarely fooled by stunts and makes calls along the line
– Extremely viable option at the second level due to solid mobility and work rate
– Pulls with smooth momentum and quick feet
– Has good hand placement and accuracy in the run and pass game
– Plays with good leverage and pad level on a consistent basis
– Bends at the knee rather than the waist

Morrissey has shown all the technical aspects of the center position but lacks the physical traits. His lack of effective play strength simply makes him a liability in the NFL. His hand usage/placement, leverage and mobility is ready for the next level but with no man-moving ability in his game, his stock plummets. He will likely be drafted late on Day 3 as a developmental backup for a zone specific scheme.

Standing at a pretty average size for the NFL, Morrissey will benefit from putting on a few pounds as play strength is desperately needed. As a player who suffered an injury serious enough to require surgery, this is something to keep an eye on. Injuries have a tendency to rear their ugly head back up when not treated and rehabbed properly. It will be important for Morrissey to make sure his ankle continues to get stronger and hold up even though the injury was two years ago. As a three year starter and two year team captain, Morrissey has shown comfort and keen eyes for the nuances of the center position. Can he continue to showcase his technical ability or will his lack of physical dominance catch up to him?