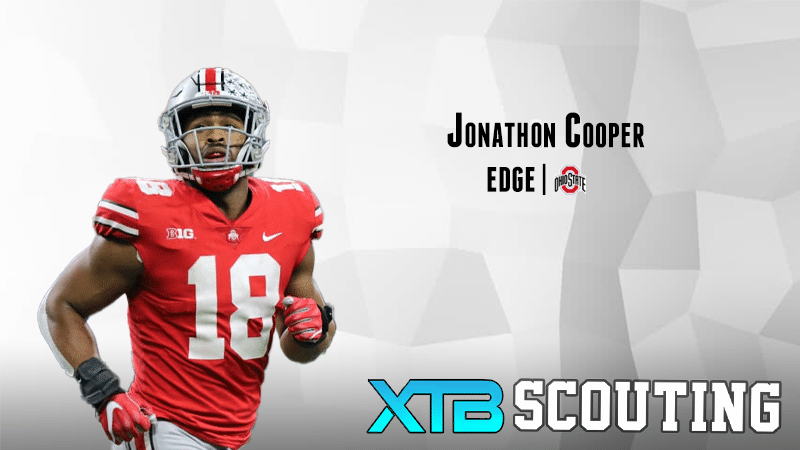 Jonathon Cooper is a former 4-star recruit out of Gahanna, Ohio who was the 33rd ranked player nationally out of high school. A redshirt senior who has played 37 games for the Ohio State defense playing primarily defensive end with his hand in the ground in Ohio State’s 4-3 defense. he dealt with injuries his senior season forcing him to redshirt in 2019 and is looking to bounce this year in the Big Ten

– Excellent use of hands wins with violent punches that help set the edge.
– Good size for the position with the height and weight to play defensive end in the NFL
– Specializes in the bull rush displaying the play strength to push the pocket.
– Solid against the run able to gain leverage against tackles and shed quickly or reroute RB’s to his LB’s
– High mental processing rarely out of position when playing zone read’s and understands his job in the system
– High Motor player giving consistent effort on every play.

– Athleticism leaves much to be desired very stiff in his movements
– Depends on the bull rush and does not use counters or have a pass rush plan
– Doesn’t have the bend as a speed rusher to corner to the quarterback consistently
– Lacks the upfield burst with a slow get-off at the line.
– Struggles to tackle in space missing tackles in the backfield when given the opportunity
– Injury history a concern forced to redshirt in 2019.

Cooper’s skill translates best to a DE in 4-3 under or over front at the next level. He has the hands usage and play strength to set the edge consistently and help out in the run game. His ability as a pass rusher could be a concern with him depending primarily on the pass rush and will have to add weight to win in NFL with this approach. He just does not have the athleticism to win consistently at the edge position and right now translates to a late day three pick.

With Big Ten football coming back in October Cooper will finally get the chance to shine without a superstar on the other side. He has usually been the sidekick to either Nick Bosa and Chase Young the past two seasons and has the opportunity to stand out as the next great pass rusher to come out of Ohio State. If he can display more as a pass rusher and stay healthy throughout the season he has a chance to rise u, draft boards.