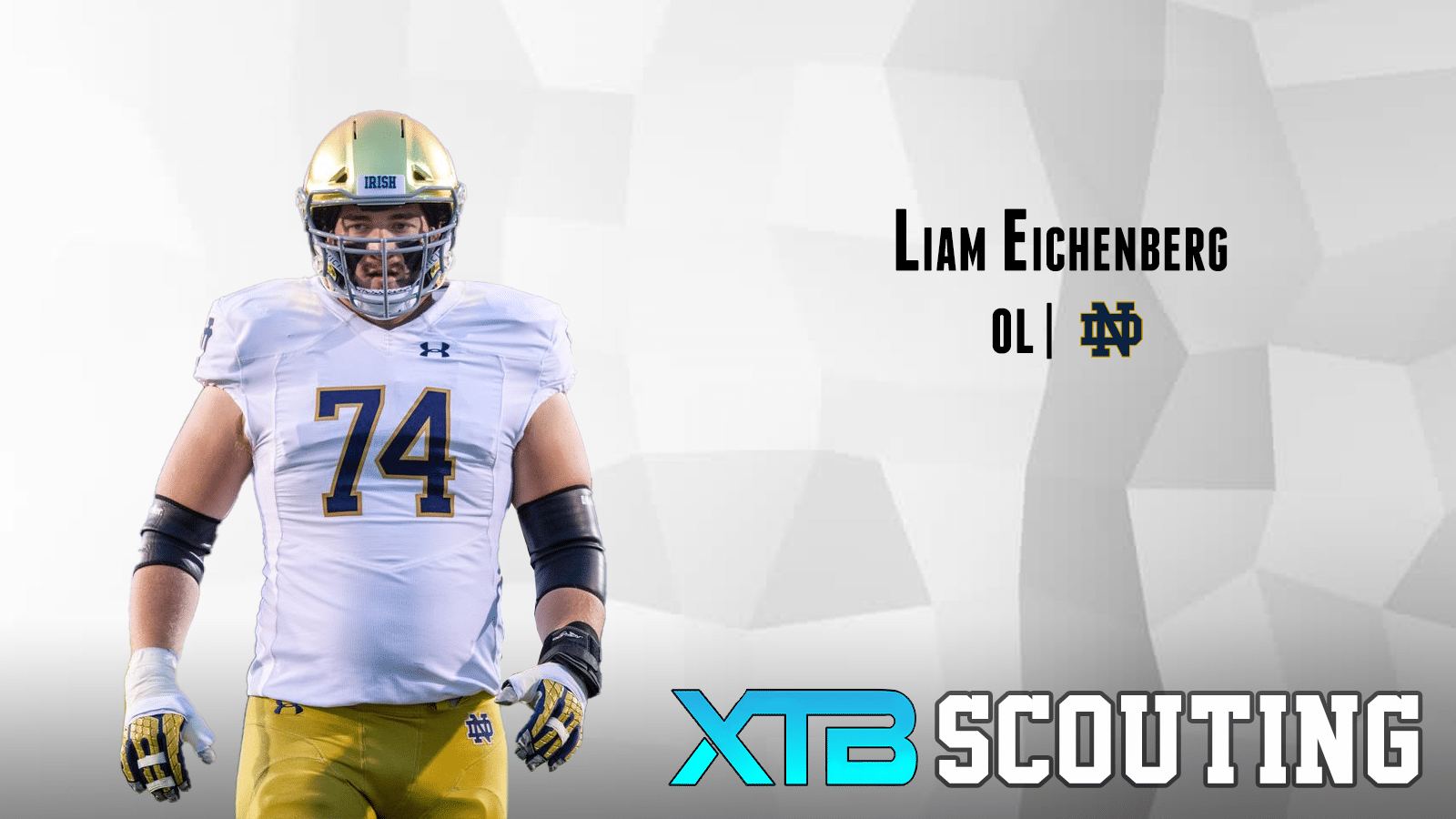 A seasoned and powerful tackle prospect who generates great up field push as a run blocker, but lacks lateral agility and flexibility

Liam Eichenberg came to South Bend as a 4-star prospect in 2016 and took over for Mike McGlinchey at left tackle during his redshirt sophomore season. Heading into his third consecutive season as Notre Dame’s blindside protector, McGlinchey is one of the more seasoned offensive line prospects in the class. He primarily showcases jump sets and 45-degree sets in pass protection, and plays in a zone-heavy offense that mixed in the occasional power run.

– Generates great vertical push as a run blocker. Will take weaker defenders for a walk with impressive upper body strength
– Good finisher with a nasty temperament
– Sets a strong anchor against bull rushes in pass protection
– Powerful initial two-handed punch knocks defenders back
– Utilizes a nice drag hand to work from inside-out, helping the guard before working to the outside to block his man
– NFL-ready size and strength to go along with adequate length for the position
– Very good anticipatory awareness and communication when facing stunts and blitzes
– Vigilant looking for work while uncovered

– Poor, wild hand placement on his initial punch
– Top-heavy player who lacks flexibility. Has a tendency to lose balance when he bends at the waist and relies on his upper body strength on blocks
– Shows a lack of lateral mobility on pass sets. Will get beaten around the edge by speed rushers
– Rarely attempts to sustain blocks with grip strength in pass protection. Aims to simply knock defenders back rather than control them
– Lack of range is evident with pulling, blocking in open space, or attempting to cross face on reach blocks
– Issues with punch timing may be instinctual

Due to his brute strength, ability to get a push as a run blocker, ideal size, and finishing mentality, Eichenberg will fit best in the NFL as a right tackle. While he’s had plenty of experience with zone blocking, he’ll fit best in a power-heavy offense that doesn’t ask him to reach block on the back side. With his extensive experience on the left and adequate pass blocking skills, Eichenberg could provide some positional flexibility early in his career as a swing tackle. He would be best suited to start his career in such a role as he works on refining his technique before becoming a starter at RT. Expect Eichenberg to hear his name called sometime between late Day 2 and early Day 3.

Developing his punch timing and accuracy will be paramount for Eichenberg in the 2020 season. His wild, oftentimes wide hands will result in penalties galore at the next level. Improving his lateral mobility on pass sets and his second level range would massively boost his stock, but it’s not exactly easy to improve on those things, especially for a player of Eichenberg’s size who doesn’t have a ton of excess weight.