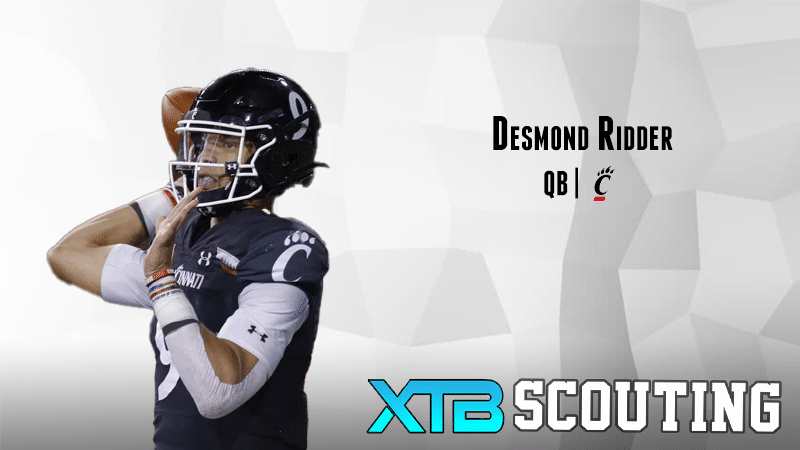 Desmond Ridder is a redshirt junior who has started the last 32 games for the Cincinnati Bearcats. He has led the Bearcats to two straight 11-win seasons and already off to a hot start in 2020. Ridder plays in a run-heavy scheme dependent on RPO’s, zone reads, quick passes of play action. Ridder has built hype with his success as the Cincinnati and hopes to use that to drive up his draft stock.

– Great size with a good weight that is ideal for the position
– Good arm able to drive the ball to opposite hashes with high velocity
– He has a good feel in the pocket, understands where rushers are, and avoids sacks, creating yards with his legs.
– Short accuracy is impressively able to great placement on slants and quick out routes.
– Great skills as a runner. Executes RPO’s, zone reads, and QB draws at a high level with great vision and the ability to make people miss in the open field.
– Can improvise when the play breaks down, either running for yards or using the scramble drill to find players downfield.
– Good mechanics with a 3/4th delivery always has his feet set and ready to drive the football.

– Concerning deep accuracy, rarely hit deep balls in the games reviewed with a high amount of underthrows and over throws.
– Can struggle with intermediate routes having bad placement and not allowing yards after the catch.
– More complex coverages can fool-Post snap mental processing needs work against tougher competition.
– It has to learn a better understanding of protections and knowledge on hot routes when facing the blitz and not have sacks.
– Didn’t play in a progression based offense was one read and go. He will have to learn that at the next level.

Ridder is a big, strong quarterback who can play consistent plays with his legs. He has the arm talent good enough for the next level and the athleticism for modern quarterbacking. However, he is more of a runner than a passer at this point, struggling to make plays in the intermediate and deep areas of the field. He is relying primarily on his legs at this point and has to become more of a passer going forward. Right now, Ridder projects as a Day 3 project quarterback.

Can Ridder continue to grow as a passer? That is what exactly he needs to show to push himself into a day two conversation as a draft prospect. He is off to a good start already and needs to continue to develop as a passer to help raise his stock.