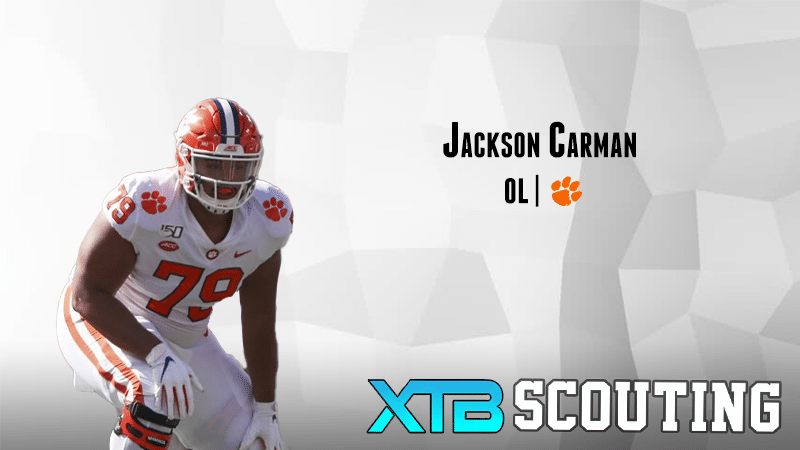 A large lineman with excellent burst, strength and athleticism who is lacking in instincts, nimbleness and technique

Jackson Carman came into Clemson has a 5-star recruit. He received limited reps on offense his freshman season before taking the starting job at left tackle his Sophomore year. At Clemson he is asked to block in Clemson’s mixed offense. The Tiger’s run a lot of RPO’s so Carman runs a lot of jump sets in pass pro. In the run game Clemson primarily runs inside zone but he has experience down blocking on power. Was asked to block out in space often on screen plays.

– Has a wide NFL ready frame
– Has really good burst and acceleration for a guy his size, get up to the second level in a hurry
– Has the excellent mobility to be a weapon on screens, does very well blocking in space
– Has long arms that he uses to engulf pass rushers
– Knows how to take advantage of off balance pass rushers by using their forward momentum to send them to the dirt
– Has the strength needed to push around defender’s in the run game

– Reactive athleticism is lacking, doesn’t move as quick moving backwards as he does moving forward
– Keeps his hands low in pass protection resulting in him punching late and losing hand battles
– Struggles keeping defenders engaged
– Struggled against speed rushes, pass rushers were able to dip their shoulder and get around him
– Instincts are lacking, sometimes spends to much time thinking instead of reacting, has been fooled multiple times on stunts

Carman is a raw athletic tackle who the tools needed to become an NFL starter but needs to take the next step to playing like an NFL starter. If he we’re to come out for the 2021 draft I would project him as a tackle who need a year as backup before becoming a starter. If he makes significant improvement in pass protection he has the size and athleticism to get into the first round.

Does he take the next step from becoming a talented but raw tackle to a complete tackle. He would need to become quicker both in his feet and in his mind to be able to take that next step. I’d also like to see if he decides to lose more weight. He was listed at 335 last season but is now listed 328. Could he lose weight and still keep his overall strength?  After struggling against elite competition Carman will need to prove himself against the like of Quincy Roche and Patrick Jones II.