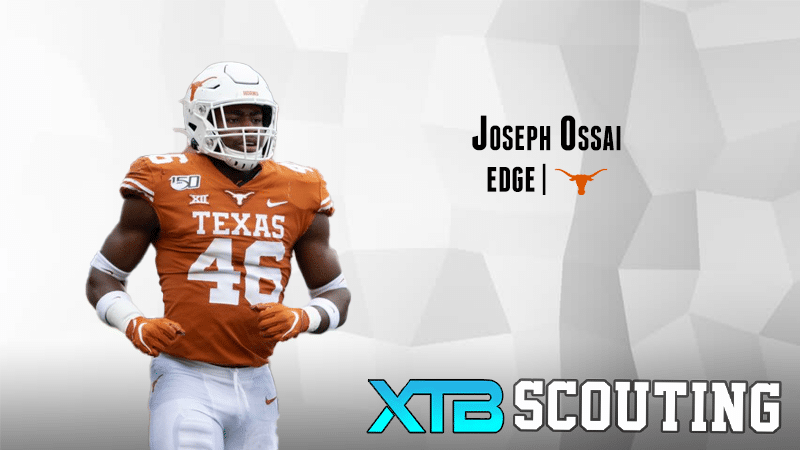 Joseph Ossai A third-year linebacker and defensive end who has played in 27 career games and has 15 starts. The former four-star recruit is coming off a breakthrough season with 13 tackles for loss and five sacks displaying his versatility. He primarily plays linebacker in Texas’s defensive scheme and plays defensive end in sub packages on passing downs. Ossai has an excellent skill set and athleticism that makes him an exciting prospect.

-Elite height with good size and length for the position.
-Outstanding athletic ability displaying agility, balance, quickness, and flexibility.
-Has the ability to bend around the corner as a pass rusher that translates to the next level.
-Good bull rush using his play strength to move defenders and push the pocket.
-Excellent use of hands, violent, and always has great placement to move defenders.
-Has a good pass rush plan, does a great job of attacking the lineman, and adjusting his pass rush skills on the fly.
-Versatile skill set can play linebacker and then defensive end on sub-packages.
-Fundamental tackler in space able to read and react and finish at the ball carrier.

-Has to be consistent at setting the edge as a defensive end against the run. He likes to shoot gaps, which can lead to big holes.
-Struggles in coverage as linebacker can get lost in zone coverage and miss assignments.
-Can be moved easily by higher-level offensive tackles and has to become stronger to play consistently at the defensive end position.

Ossai has a special skill set that makes him an intriguing prospect. His athleticism is top-notch, and he has the speed to play in space as a linebacker. He displays the bend you love to see from a pass rusher with a pass rush plan that helps him get to the quarterback. However, his struggles in coverage are noticeable in his film, and it’s why he projects more to a pass rusher at the next level instead of in space linebacker. If he can get stronger and learn to be more consistent at setting the edge, he can develop into a Day 1 draft pick.

Ossai will improve his ability to set the edge and display more skills as a defensive end and edge rusher. It will also be interesting to see if he can become better at playing in zone coverage and better understand where he needs to be in the scheme.