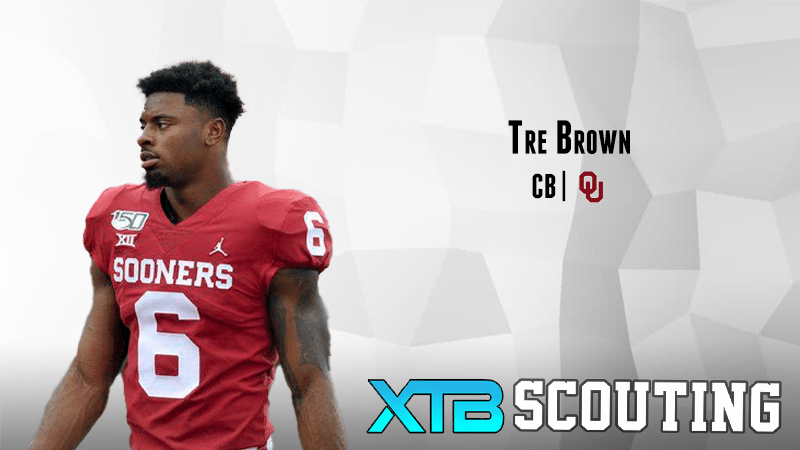 A corner with blazing speed who lacks the size, technique and ball skills to be an immediate impact starter

Tre Brown came into Oklahoma as a 4-star recruit and played on special teams early. He became a starter halfway through his sophomore season and hasn’t missed a game since. During his junior season White was primarily the team’s outside left cornerback, but he had a handful of snaps as a safety. No experience in the slot. As an outside corner, he primarily plays man press with outside leverage. Oklahoma’s defense mostly played Cover 1 and quarters. Blitzed rarely. Not a full-time player, Brown only played about 75% of meaningful snaps.

Strengths of his Game:

– Speed. he may be the fastest corner in all of college football
– Physical for a corner his size. Knows how to use his hands to disrupt wide receivers after the release
– Excellent at covering vertical routes. Uses his speed and hands to limit separation downfield
– Flashes good tackling technique by wrapping the ball carrier
– Can close on passes very quickly
– Understands his role in man coverage and rarely makes mistakes
– Very aggressive player. Always willing to be physical throughout routes

– Ball Skills. Regularly loses in contested catch situations
– Lacks size and strength to cover large X receivers at the next level
– Change of direction is below average. Receivers regularly get separation on their breaks
– Too often will grab and hold receivers coming out of breaks. Gets called for a lot penalties.
– Does not have the instincts or the reaction time to be a quality zone defender
– Does not disrupt games or make impact plays, only has 3 turnovers in his career.

Tre Brown is a corner who has the speed to cover just about anybody plus some man coverage skills. The only issue is that he doesn’t have the size to cover big X receivers throughout the NFL and he doesn’t have the ball skills to overcome those deficiencies. He doesn’t project well as a slot receiver because he lacks the change of direction skills needed to cover crafty route runners. He does project very well as a special teamer as he has the speed and nastiness needed to become a great coverage player or a great return man. If he can improve his quickness or ball skills he’ll have a chance at going into the third round but as it stands now he looks like a 5th-6th round project.

Can he improve his down to down coverage abilities? In order to overcome his lack of size and quickness, he is going to need to prove to be elite at using his speed and athleticism to shut down receivers. He’ll have a chance to improve his stock with a big matchup against Oklahoma State Tylan Wallace on the 21st of November. Also watch to see during all-star week if Tre Brown shows any skill at playing slot corner or safety, adding versatility could be key to him moving up boards.