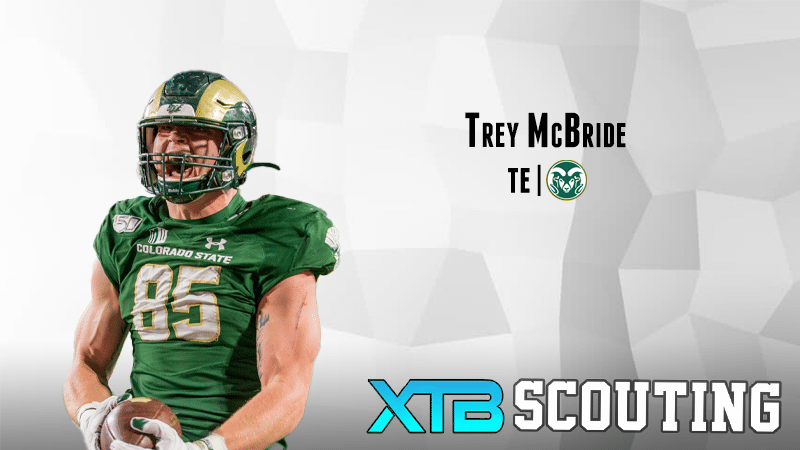 Trey McBride is a nicely built in-line tight end who has a good overall skill set between his reliable hands, toughness after the catch, and ability to create room as a run blocker. He began starting games as a true freshman in 2018, but became the full time starter during his sophomore year. McBride has the versatility to be moved around, and should be able to function as an H-back or slot receiver if necessary. Overall, his skill set is one of the most intriguing out of the tight ends in this draft class.

– Sturdy blocker who has the requisite anchor to hold up against smaller defensive ends
– Nice body type for the position that matches up with ideal height, weight, and proportions
– Good core strength and balance in most situations. Won’t lose control and get tripped up over minor things
– Attacks the ball and gets good hand extension to snag it out of the air
– Ability to create separation with both his athleticism and hand usage is a pleasant surprise
– Moves around with an ease that not many other in-line tight ends have, and it will allow him to make plays at every level of the field
– Finishes his blocks and plays with a nasty streak against linebackers
– Doesn’t have any apparent fatal flaws with his game in terms of play style and overall traits

McBride projects as an early career starter with the tools to be a long term solution at the tight end position for whichever team picks him. While he does not offer the elite passing game tools to be a top target, McBride should be a regular part of the plan. He’s a high floor prospect who should be off the board within the first several rounds, although his athletic testing will likely have an impact on how high he can rise.

McBride seemed like a man on the move in the summer, but he reversed his decision, instead deciding to stick with the program in a season that seemed unlikely to be played. Now, McBride will get his chance to further improve his draft stock in a condensed campaign. As a true junior at a non-premium position, it’s no guarantee that McBride will be declaring for the 2021 NFL Draft, but it will start with a strong showcase over the eight game season that Colorado State plans to play this fall. Look for an uptick in production with senior standout Warren Jackson taking his receiving ability off to the league.