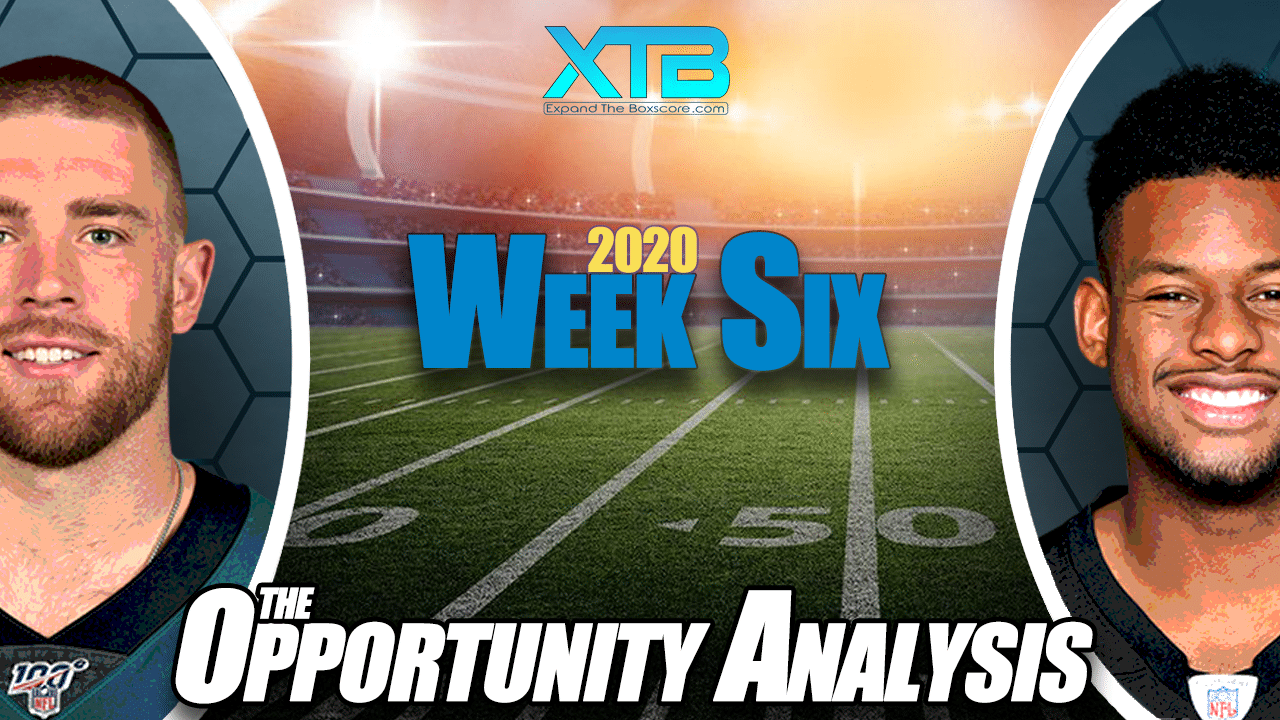 The Opportunity Analysis this week sheds light on a tight end looking for positive regression, a dual-threat rookie wide receiver, and many others that are due.

Zach Ertz has faced two of the toughest defenses against tight ends the past two weeks in the 49ers and Eagles. This has led to back-to-back performances where Ertz has not cracked 10 yards receiving. This will lead many fantasy owners to panic and either trade or bench him this week.

However, it is important to remember that even in back-to-back poor performances, Ertz still leads the team in routes and is heavily utilized in the slot. This type of usage should continue as DeSean Jackson, Alshon Jeffery, and Dallas Goedert are out once again in Week 6, i.e. the Opportunity Analysis is targeting Ertz.

In Week 6 Ertz has a much easier matchup versus the Baltimore Ravens. On paper the Ravens would make most run for the hills, but in reality opposing tight ends have found success against them. This includes David Njoku (3-50-1), Jordan Akins (7-55), and Travis Kelce (6-87).

In most cases Zach Ertz will be started in season-long, but he will make for a very nice contrarian play this week in DFS as his dual bad performances will have a lot of people off of him this week.

Travis Fulgham’s usage skyrocketed in Week 5 as his team-high 12 targets led to a 10-152-1 performance against the Pittsburgh Steelers. More impressive was he ran just two less routes than Zach Ertz and John Hightower while doubling both of their target counts on the day.

Fulgham ran more routes than Greg Ward and Miles Sanders, so his role is cemented heading into Week 6. Finally, as discussed prior with Jeffery and Jackson out look for Fulgham to see similar usage in routes in Week 6.

Now in most cases we would be telling you to fade a player coming off such a big week, but the Eagles are big underdogs and face a Ravens defense that has seen the fifth most dropbacks per game this season. This season notable outside wide receivers including Brandin Cooks (5-95), Tyreek Hill (5-77-1), Mecole Hardman (4-81), and Terry McLaurin (10-118) all had solid fantasy days against the Ravens.

With the Eagles trailing and a slight uptick in pass volume, Fulgham should be able to build on his solid performance and flirt with WR3 value once again in Week 6.

Last week JuJu Smith-Schuster took a backseat to Chase Claypool, who completely dominated the Eagles secondary while adding in a rushing TD to put a feather in his cap. This monster performance led to many people running to the waiver wire to grab him and rightfully so.

With Diontae Johnson out it looks that Claypool will be in play once again, but this is not about Claypool, this is about JuJu. In Week 5 JuJu struggled, catching four balls for 28 yards on five targets.  This came against an Eagles defense that has allowed the fifth fewest points to the slot versus the third most points out wide this season.

A slower game should have been expected.

In Week 6 the Steelers face a Cleveland secondary that is nearly the opposite of what they faced last week. Cleveland still is not great out wide as they allow the 14th most points to that position, but it is in the slot where they get beat the most.

This season no team has allowed more points to the slot than the Cleveland Browns. This includes big games to Tyler Boyd (7-72-1), Ceedee Lamb (5-79-2), and even Willie Snead (4-64-1). While everyone jumps to play Chase Claypool in DFS, a pivot to JuJu should give you an edge in Week 6.

Eric Ebron still makes a lot of plays that drives fantasy managers crazy. This includes drops and fumbles, as last week his 5-43 stat line would have been okay for fantasy, but a fumble turned him from a low-end TE1 to a dud on the week.

The good news for Ebron is he is clearly ahead of Vance McDonald as he ran more routes (27 to 14) and received more targets (6 to 1) in Week 5. Those routes and targets were good for third and second on the week, so this usage is encouraging heading into Week 6.

With notable tight ends Darren Waller, Hunter Henry, Jared Cook, and Greg Olsen out this week, Eric Ebron should be on the TE1 radar in Week 6. The matchup is great as well as the Browns have allowed the sixth most points to the tight end position.

When it comes to the Denver Broncos, it is time to look forward instead of backwards as Drew Lock is set to return in Week 6, which is great news for all the pass catchers in Denver. In Week 4 Tim Patrick stole the show securing 6-113-1. Jerry Jeudy had a quiet day only getting two receptions, but he made a highlight reel TD grab that saved his fantasy day.

Even though the volume was not there for Jeudy, he still ran the second most routes on the team and has become the primary slot wide receiver. This type of usage should help him in tougher matchups, including this week versus the Patriots.

The Patriots defense is not what it was last year, but still one of the best units in the league. The one area where they struggle is covering slot receivers as they allowed the fifth most fantasy points to the slot so far in 2020. This is very different then other positions as the Patriots are one of the best defenses against tight ends and middle of the pack versus receivers on the outside.

Notable performance inside include Tyler Lockett (7-67-1) and Hunter Renfrow (6-84-1). This is music to the ears of Jeudy who runs over 80% of his snaps in the slot. Finally, with the return of Drew Lock and the Broncos big underdogs on the road, I expect Jeudy to get his, making him not only a season long play but a DFS start in Week 6.

Marquise Brown finally broke into the end zone last week as the Ravens began to throw the ball more. This led to a season high six receptions for Brown on his way to solid 6-77-1 day. The 39 dropbacks were a team high for the season as it marked the first time they were over 35 pass attempts on the year.

Anytime the Ravens throw more Brown should immediately benefit as his 35 targets on just 141 routes (25%) is one of the best marks in the NFL.

The Eagles on paper are a great matchup for outside wide receivers but this has not been the case for top receivers. This is due to the Philadelphia utilizing top cornerback Darius Slay as a shadow corner so far in 2020. This includes holding Terry McLaurin (5-61) and A.J. Green (5-36) outside the top 36 wide receivers.

Of course, Green has not been himself this season, but the two weeks prior he saw nine and 13 targets and with Slay on him that dropped to just six. With no other notable receivers on the roster, I expect Slay to track Brown making him a risky WR3 this week.

Austin Hooper has not been a top 12 tight end this season, but he continues to be widely owned in most leagues. In Week 5 the Browns saw an nice uptick in pass volume which led to Hooper having a solid day, going for 5-57 on a team high 10 targets. This marked the second week in a row that Hooper got five receptions after he secured 5-34-1 Week 4 against Dallas.

These solid performances have put Hooper back on the fantasy and Opportunity Analysis radar, and with many top tight ends out, Hooper might be on your radar this week. I am here to tell you that might not be a good idea.

This week the Browns will face a Steelers defense that has allowed the eighth fewest points to the tight end position in 2020. Now I know what you’re thinking – the Colts are tougher versus tight ends. That is technically true, but prior to the game against Hooper the most notable tight end they faced was Jimmy Graham.

Meanwhile, the Steelers have held Evan Engram and Zach Ertz under 10 yards this season. Noah Fant had decent day, but the floor for Hooper is rock bottom. If you need a streamer or just a bye week filler, I would play Eric Ebron in this same matchup over Hooper in Week 6.

If D.J. Chark is out then you can throw this Opportunity Analysis section away. However, Chark was able to get a limited practice in on Friday so it looks like he could play in Week 6. The Jaguars had a great game last week from a pass volume standpoint, as the 55 dropbacks were a season high.

This led to a very solid PPR day for Laviska Shenault Jr., as he secured seven receptions for 79 yards. This marks the second time in two weeks where Shenault eclipsed five receptions and 75 yards. However, it is important to note that this production has come with Chark limited, Tyler Eifert leaving the Week 5’s game early, and an influx of pass volume.

No team has seen less dropbacks per game on defense then the Detroit Lions. This reduced pass volume limits the opportunities for other options in the pass game. The injury to Chark should be monitored as if he is out Shenault should be a solid WR3/Flex.

However, if Chark plays he will be third on the team at best in routes, and with a dip in pass volume that could limit his fantasy appeal this week. Even with many top wide receivers out including Tyler Lockett, D.K. Metcalf, and Keenan Allen, I would consider other options that have been featured in this article.