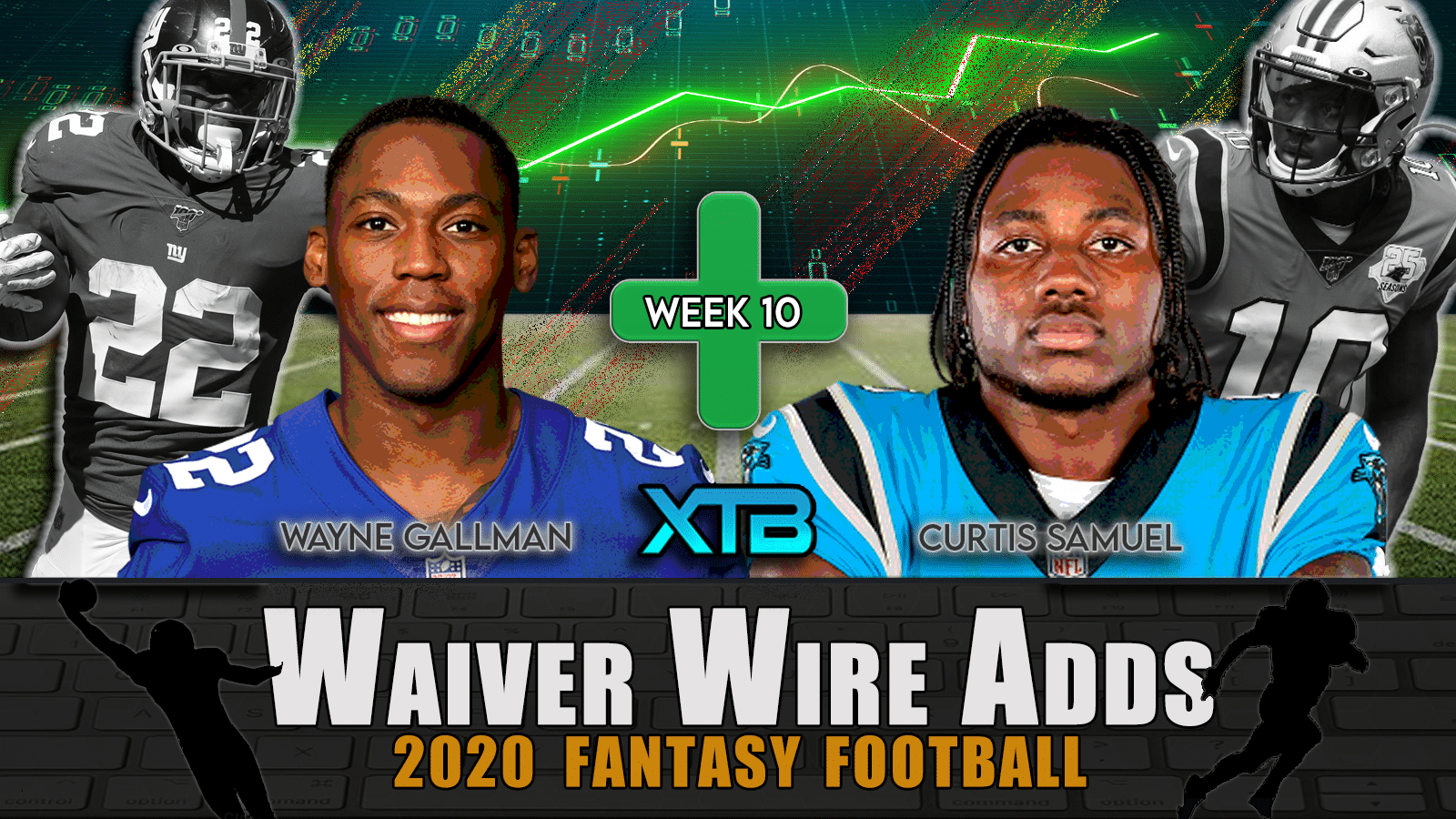 Posted at 15:37h in Fantasy Football by Jeff Hicks
0 Likes
Share
No need to do small talk. Time for the Week 10 waiver wire adds.

The Lions and Bengals are on deck for Alex Smith and the Football Team. Smith will not carry you to a league victory, but he could be the sneaky streaming play that gets you at top 15 quarterback performance the next two weeks.

No complaints here for the rookie’s first road start against a good Cardinals team with a powerful offense. Tua Tagovailoa showed his rushing upside on seven carries and completed almost 70% of his passes. Tua has for solid matchups that make him a waiver addition that could help you land a playoff spot in your league. It starts with a home game against the Los Angeles Chargers.

Quarterbacks with rushing upside will always be worth watching/rostering. Jake Luton may get crushed Week 10 against the Packers and could fade away. Watch the rookie and hope Week 9 was not an aberration.

Wayne Gallman has 10 carries and a touchdown in three straight games. His opponents over that time? Philadelphia, Tampa Bay, and Washington. Touchdown variance is always in play, but it is tough to ignore three top 20 weekly finishes against three top tier run defenses.

I was not sure if Jordan Wilkins would get another healthy workload following his 20-touch Week 8 performance. He did, seeing 11 touches and two targets against the Ravens. The Colts offense was bad Week 9, but Wilkins is now in play every week. Jonathan Taylor has not showed he can be the lead back every week. The Colts have plus running matchups until the Steelers in Week 16.

Antonio Gibson has one touch on third down this season because of J.D. McKissic. Alex Smith will target his running backs, making McKissic an every week option in PPR leagues as long as Smith is under center.

Tony Pollard has top 40 showings in four of his last six games despite Ezekiel Elliott’s elite touch share. The Cowboys have no hopes of being a relevant team this season and may shift some of the workload to Pollard, preserving their high-priced lead back.

If David Montgomery is forced to sit out Week 10 with a concussion, Ryan Nall is your starting back. Montgomery sitting out is even more likely with a bye coming Week 11.

If Chicago wants a more traditional back to toe the rock in Montgomery’s stead, Lamar Miller is the guy. He could be a practice squad call-up for their matchup against the Minnesota Vikings. He may have zero upside off the waiver wire after Week 10, but he may be the easiest player to add with the most upside.

Curtis Samuel is coming off back-to-back WR1 performances despite the return (and departure?) of Christian McCaffrey. It appears Matt Rhule and Co. have figured out how to maximize Samuel’s talents. He is an every week starter on an impressive offense.

What a performance by Jakobi Meyers on Monday Night Football. Meyers has double digit targets in two consecutive weeks but draws a difficult matchup against the Ravens in Week 10. Meyers will not be on the waiver wire past this week. He will be no worse than a flex play heading into the home stretch of the fantasy season.

Nelson Agholor has been a WR3 or better in four of the past five weeks and is the only wide receiver that can be trusted on the Raiders. Never thought I would write a sentence like that involving Agholor. He has two matchups over the final weeks of the season that has limited field stretchers like Agholor. Add him off the waiver wire.

The loss of T.Y. Hilton for the Colts is more of a real football storyline than fantasy. Michael Pittman Jr. is the benefactor of his absence and saw seven targets in Week 9. Week 11’s game against the Packers is the most difficult on the schedule for Pittman going forward. He has a solid floor if he remains healthy.

David Moore will not be a play once bye weeks are over, but the Seahawks are a pass-heavy offense that utilizes Moore as a safety net for Russell Wilson. Seattle really likes the veteran, and he should remain as a flex option for the next month. He has been a top 30 receiver the past two weeks.

Tua has a trusted group of players to target through two games, and Jakeem Grant is apart of that group. Grant is a speculative waiver wire add that with decent upside.

The tight end position is tough, so please allow for a higher rostered player to make the list. Eric Ebron has been a consistent scorer and gets the Bengals in Week 10.

TE4 for Week 9! The Bears love giving up yards and touchdowns to tight ends. Irv Smith Jr. should continue to see a handful of targets every week.

You could do worse on the waiver wire!

Jack Doyle could miss Week 10 with a concussion. His potential absence could clear targets for the crowded tight end group in Indy and allow Mo Alie-Cox to get a handful of targets on a team without a dominant receiving option.