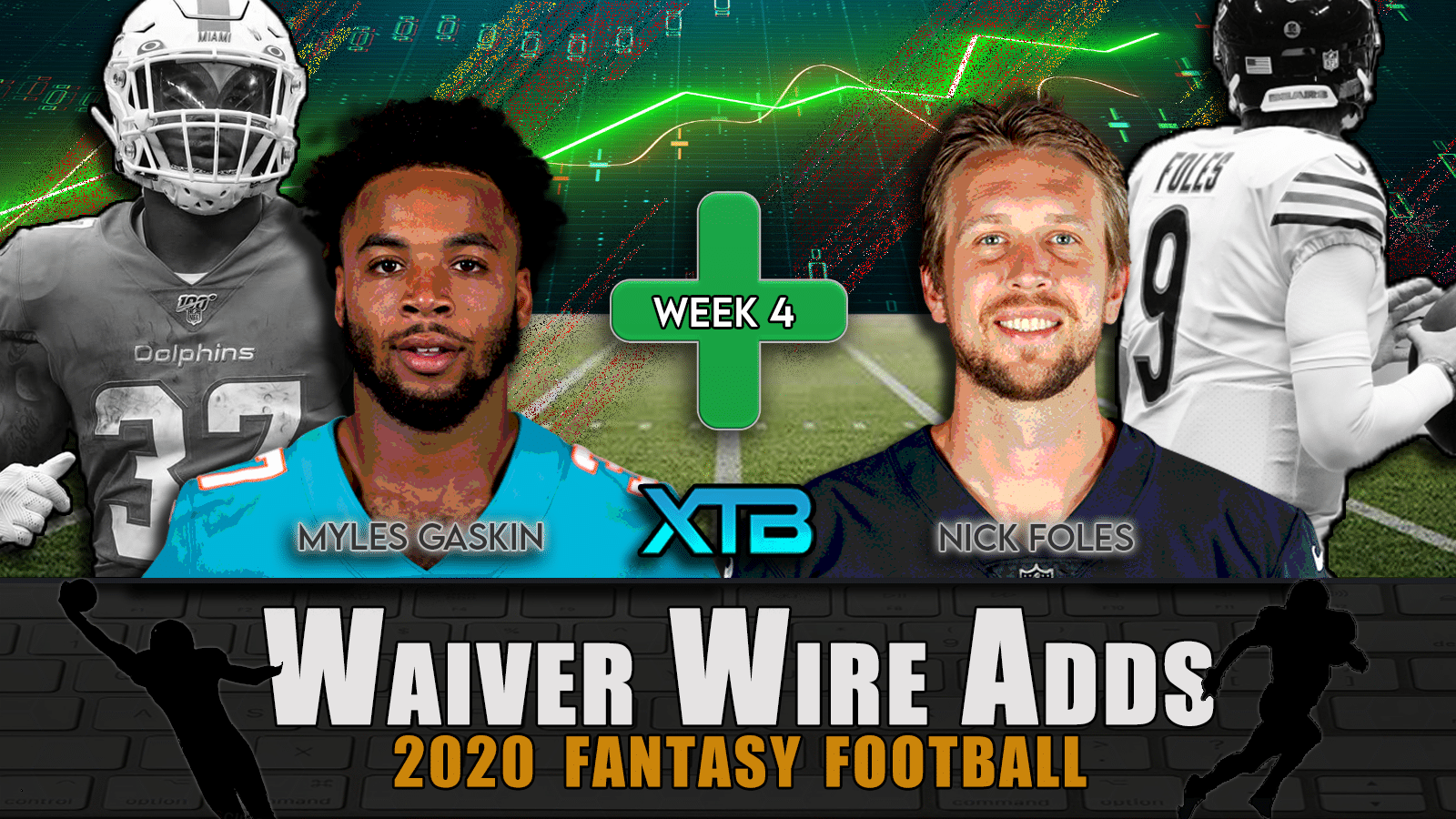 The waiver wire continues to be a cornucopia of available talent. No need to waste more time.

The Mitchell Trubisky era should be (please be) over in Chicago. Nick Foles came in after one offensive drive in the second half, leading the Bears to 21 unanswered points. Chicago had two touchdowns reversed, but Foles technically threw for five (four should have counted) in less than two quarters. Chicago has two home games in a row against the Colts and Buccaneers, so Foles has upside against two mediocre secondaries.

Foles should be picked up in every two-QB leagues and should see his roster totals rise after this week’s waiver wire period.

I could see the 49ers giving Jimmy Garoppolo another week to heal from an ankle sprain with the Philadelphia Eagles coming to town. Nick Mullens showed chemistry with Brandon Aiyuk and should have Deebo Samuel back for Week 4. Mullens torched the New York Giants for 343 yards and a touchdown in Week 3 and could do the same in Week 4 as a waiver wire streamer.

The Patriots backfield continues to be tough to predict, but if they are in positive game scripts Sony Michel belongs on your roster and not on the waiver wire. The Pats have games against the Chiefs and Broncos before a bye, and Michel is the type of back that can help control a game, especially if trying to limit Kansas City’s offense.

Neither defense is a tough matchup, so Michel should see plenty of touches.

Myles Gaskin is dominating touches in the Dolphins backfield. Gaskin received 27 total touches, securing all five of his passing targets for 29 yards Thursday night. He will continue to be on the field in all game situations and will be important in games against Seattle and San Francisco of the next two weeks.

I do not see a running back on the waiver wire that will receive the touches Gaskin has and will get.

Jerick McKinnon started the game for San Fran, but Jeff Wilson Jr. saw more touches and had two touchdowns. McKinnon left their win over the Giants with a rib injury, so if every other back is out, Wilson will be looking at a heavy workload against the Eagles.

Rex Burkhead showed what happens when he gets heavily involved in the Patriots game plan. He will continue to have a role, but with James White expected back for Week 4, the type of role is unknown. Like Michel, knowing who will be used in the New England backfield is a guessing game.

The Jags did Laviska Shenault Jr. no favors in their Thursday night loss to Miami. Instead of featuring the rookie dual threat, the offense turned to Keelan Cole and the corpse Dede Westbrook despite not having D.J. Chark. This can be rectified will three juicy matchups against Cincinnati, Houston, and whatever Detroit calls that defense.

Even before Davante Adams was hurt, I told you so. Get him off the waiver wire.

The yardage is not there yet, but Golden Tate has 10 catches in two games. As a WR3/4 in PPR leagues, that number of secured targets makes him a player you must roster. Tate should see a yardage uptick in Week 4 on the road against the Rams. Jalen Ramsey should be tasked with locking down Darius Slayton.

Bills WR Cole Beasley totaled 100 yards from the slot against the Rams in Week 3.

I thought Randall Cobb would be the safety valve for Deshaun Watson in the preseason, and it took a few weeks for that to show. Watson will continue to be short on time while throwing, so Cobb is a great player to target as the short-route runner in Houston.

Chase Claypool has more upside than James Washington if Diontae Johnson misses any time with a concussion. Claypool has a long touchdown already this season, so the boom is there along with the bust potential.

Two touchdowns in two weeks, consistent volume on a WR-needy team; it is gross, but Braxton Berrios has value.

Andy Isabella is taking advantage of Christian Kirk’s injury, and I believe he will continue to play even when Kirk comes back. The improved chemistry shown between Isabella and Kyler Murray is palpable.

So, this is why Minnesota drafted Justin Jefferson! The outburst helped Kirk Cousins because he desperately needs a second reliable target, but it is also Kirk Cousins. Jefferson should be a low-floor, higher-floor depth receiver in fantasy going forward.

We saw some flashes from Greg Ward Jr. in 2019, but with the Eagles hurting for receiver help again in 2020, he has stepped up and deserves a move from the waiver wire to your bench.

Dalton Schultz only caught four targets for 48 yards in their shootout loss against the Seahawks, but the defacto #1 tight end in Dallas has 16 targets in two starts. Having a piece of the potent Cowboys offense is a must in 2020 and Schultz is the only one available on the waiver wire.

The demise of Mo Alie-Cox may have been greatly exaggerated. MAC caught all three of his targets, including a touchdown while the returning Jack Doyle had zero catches. Philip Rivers loves throwing to tight ends, so make sure you snag MAC.

I swear Jimmy Graham was targeted on 75% of passes made between Trubisky and Foles, and it is obvious that Graham is an integral part of the offensive game plan in Chicago. In Week 3, he had 10 targets, including four in the red zone and was the target of a two-point conversion attempt.

Few waiver wire options have the same TD upside as Graham now that Foles is the QB in Chicago.

Aaron Rodgers established his trust in Allen Lazard with Davante Adams out, and he may have locked in Robert Tonyan as a new trusted target after Sunday’s win in New Orleans. Tonyan has doubled his touchdown total from 2019 and should see plenty of targets between the hashes next week against Atlanta.

Tonyan should be easy to add off the waiver wire.