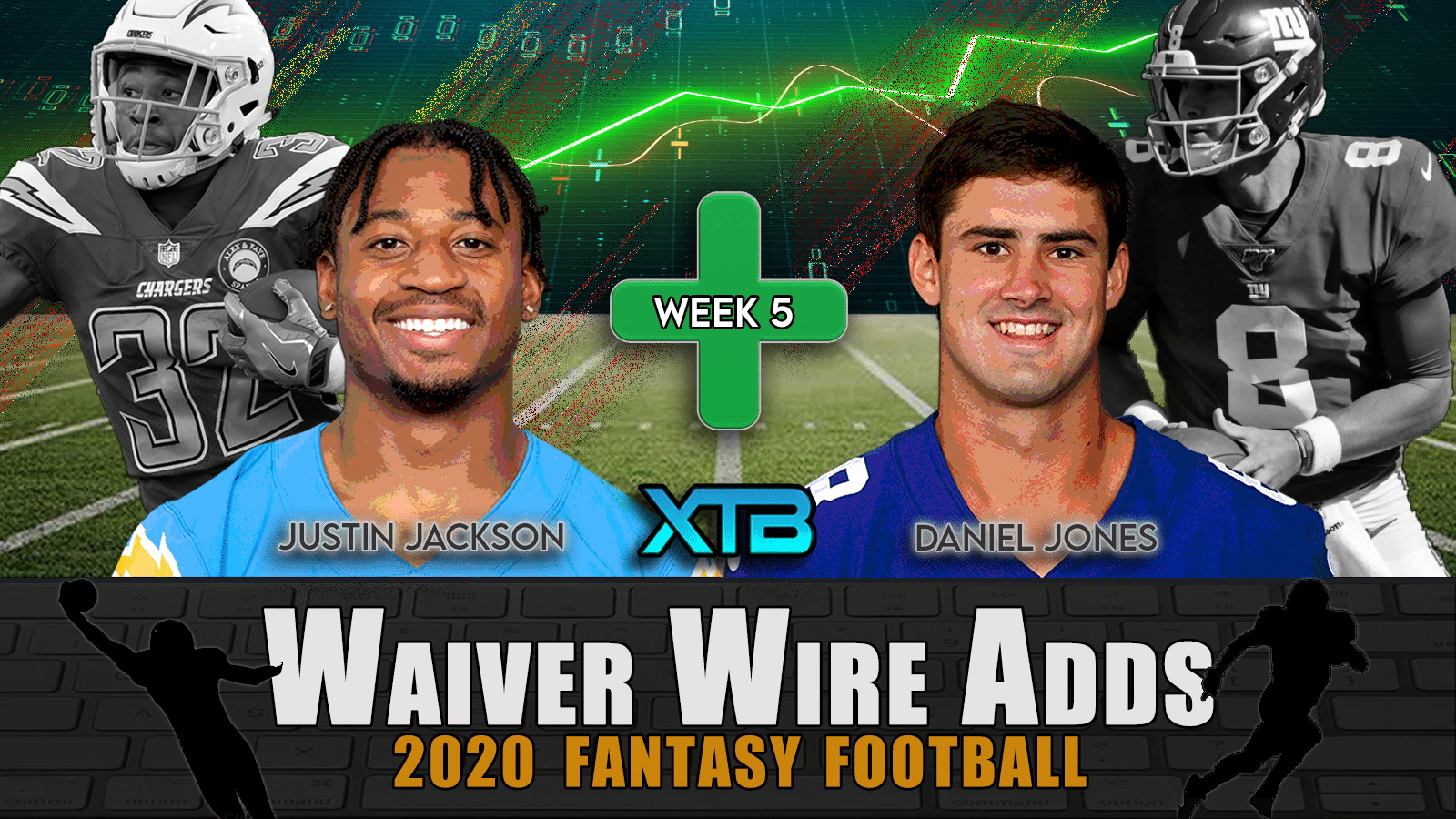 The Week 5 waiver wire produces more than a few gems once again, including opportunity at the ever-changing running back position.

Daniel Jones is fine as a real-life quarterback, but for at least Week 5, he is the apple of my streaming eye on the road against the Dallas Cowboys. The Cowboys defense revived the careers of Baker Mayfield and Odell Beckham Jr. in a 49-38 drubbing by the Cleveland Browns. Dallas has allowed 146 in four games with the most being to the worst offense in Cleveland.

After a tough start to the season, Jones’ schedule eases and it starts against Dallas. He should be the no-brainer waiver wire quarterback add.

After his best performance of 2020, Teddy Bridgewater gets the Atlanta Falcons defense. Atlanta will be coming off a short week road game. Bridgewater should continue to mix air the ball with Mike Davis filling in admirably for Christian McCaffrey and Robby Anderson spreading out the secondary.

Nick Chubb is out with an MCL injury and will miss extended time. Kareem Hunt is the uncontested lead dog going forward, but D’Ernest Johnson fits the Chubb role. Johnson logged 95 yards on the ground and should see enough carries to be FLEX-relevant heading into the bye week grind. No worries about adding him from the waiver wire.

Kenyan Drake continues to look bad, and Chase Edmonds continues to see more action. Edmonds has a 17-to-5 target advantage over Drake despite not seeing nearly the same touches in the run game. Drake left Sunday’s game with a chest injury, and if it were to keep him out for any time, Edmonds would go from the waiver wire to the RB2 conversation against the New York Jets Week 5.

Justin Jackson was the expected backup to Austin Ekeler in 2020, but Joshua Kelley had other plans. Ekeler is expected to miss a significant amount of time, opening the door for Kelley and Jackson. Only problem is Kelley is widely rostered (get him if he is not). That leaves Jackson as the back to target on the waiver wire because he is easier to attain.

Weeks 6-9 offer four plus matchups for the running back.

Antonio Gibson is the lead back, but as long as the Washington Football Team has injuries across their receiving corps, J.D. McKissic will have value. McKissic saw a season-high eight targets and caught seven of them. Washington has three consecutive games where the offense could score and/or be asked to score a lot of points.

Despite playing with an aging Drew Brees, Tre’Quan Smith is making the most of his current playing time. Michael Thomas could come back Week 5, but with a Week 6 bye looming, another game off makes more sense. Smith will see 4-8 targets without Thomas in the lineup and should continue to be used once the bye week has past against the Carolina Panthers.

The bye week may scare other players from adding Smith on the waiver wire, but it should not scare you.

The two touchdowns are welcomed, but what is good to see is that Tee Higgins has had his targets go from zero, to six, and then nine in Week 4. Higgins is playing like the WR2 in Cincinnati and is attached to a promising young quarterback.

Greg Ward Jr. has 26 targets! I expect his role to remain even when Alshon Jeffery and DeSean Jackson return in the next week or two. The Eagles have three plus matchups via the air over the next four weeks, including Dallas.

Scotty Miller has a set role in the Buccaneers offense with or without Chris Godwin, a great find on the waiver wire. His role is more profitable without Godwin but no complaints here. If Godwin does come back on a short week against the Bears, Miller could move to the slot exclusively and draw abhorrent slot corner Buster Skrine.

Dalton Schultz has 16 targets in two starts this season, more than Michael Gallup and CeeDee Lamb over that time. Dak Prescott will utilize the tight end has been tasked with picking up the Cowboys defense’s slack. Schultz is a borderline TE1 going forward.

Deep waiver wire add here folks. Cameron Brate has a chance to earn more targets with O.J. Howard done for the season. Rob Gronkowski has been a disappointment this season, so Brate could pass him as the receiving tight end for now.