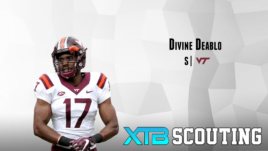 A high-flying, high effort safety that struggles with the nuances of the game due to recent position move

Divine Deablo came to the Hokies as a receiver originally but saw time as a defensive substitute as a freshman. As a sophomore it was more of the same until he suffered a fractured foot, ending his season. With only seeing time in four games of his 2017 campaign, he decided to take a medical redshirt. As a redshirted sophomore and junior he saw a lot of action as a starter on defense. In VT’s base 4-3 defense that experiments with a multitude of man and zone as well as an array of blitz packages, Deablo sees time all over the field. While he typically plays a deep free safety position he has seen time at strong, in the box as well as an off ball linebacker.

– Great combo of size and athleticism. Has the range to play deep safety as well as the physicality to match up with tight ends
– Extremely aggressive and tactical as a tackler. Can wrap up with serious strength and technique
– Demonstrates above average vision in zone coverage to see the whole field
– Shows requisite size and strength to play in the box consistently
– Has flashed the ability to make a difference as a blitzer with sneaky and physical
– Has potential to be a core special teamer with his blistering straight line speed and adequate tackling technique

– Read routes just a tick late
– Ball skills are just average right now. Struggles to track the ball efficiently
– Has the occasional tendency to overrun in pursuit and overcommit to tackles
– Little to no experience outside or in the slot
– How shown minimal communication as a leader of the secondary

Deablo possesses the athletic ability to step for step with the stars of the NFL, but is still new to the position. His extreme rawness is evident in his game and he could be a player toted for a meteoric rise. For now, he is simply a developmental backup and core special teamer. A move to an off-ball linebacker is also an option for Deablo should he pack on some pounds. Expected to go mid Day 3, a rise to the second round or even a fall to being a PFA could be possible for Deablo. How he performs this season will be vital.

Deablo has all the requisite athleticism to succeed at the NFL level but simply lacks the experience and knowledge of the safety and other defensive positions to make an impact day one. His tackling technique, instincts in coverage and overall feel for the game need heavy improvement. There is no denying Deablo’s commitment and ability, but can his instincts develop? Deablo will have a lot more pressure placed on him as a team leader this season. How will he respond to his new found responsibilities? Last but not least, is safety his best position? Going from receiver to defensive back to linebacker would be tough. Is he better off staying at safety or should he capitalize on his physical gifts and become an off ball linebacker? 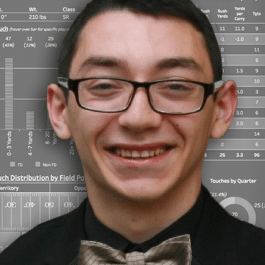