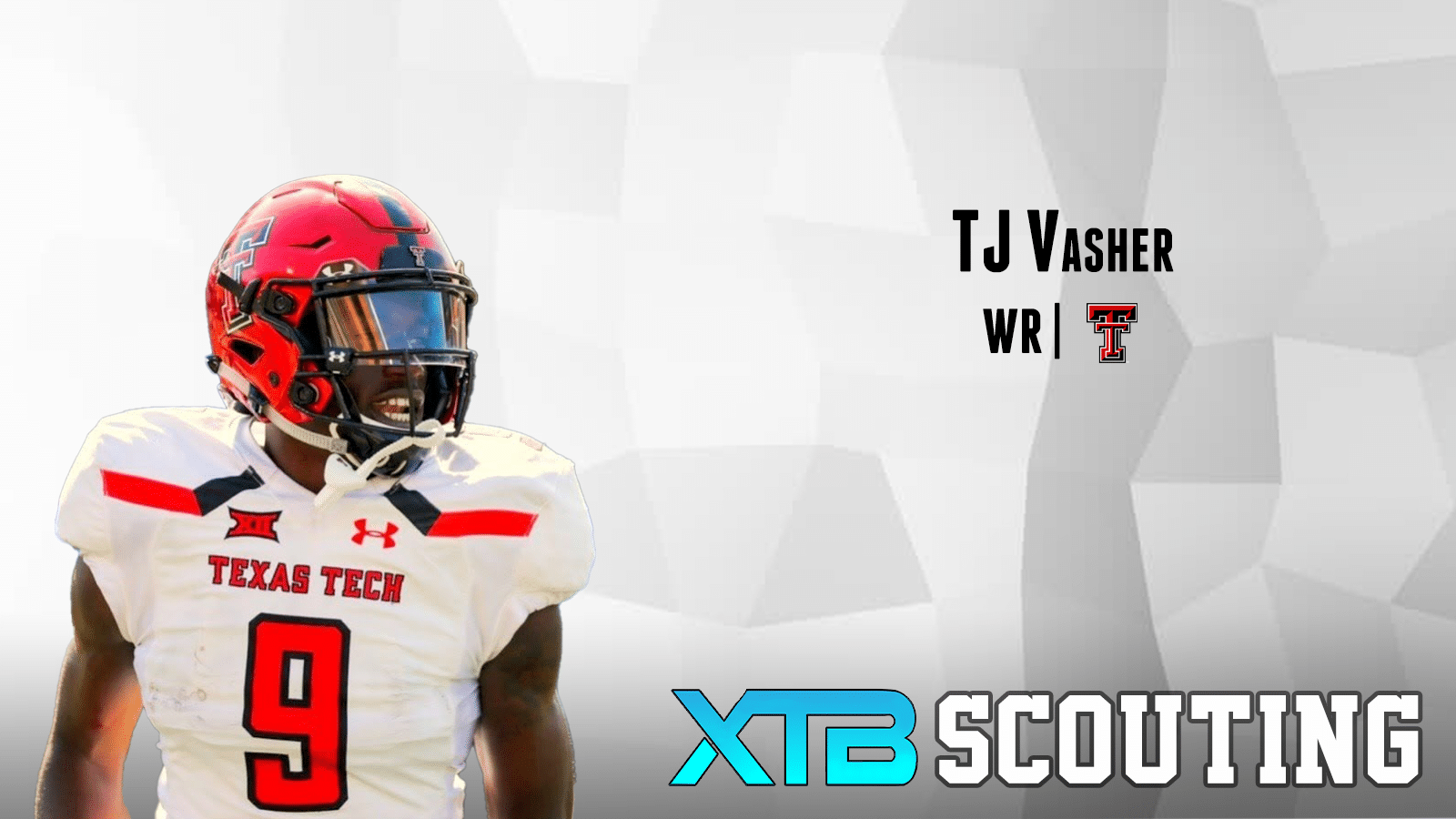 TJ Vasher is entering his 5th and presumably final season in Lubbock in 2020. As a wide receiver in Matt Wells’ spread offense, he is mainly utilized on deep and medium routes. Going into 2020 he has the chance to end up among the program greats when it comes to receivers, and he might have to if the Red Raiders hope to make a significant impact in the conference game heavy schedule the Big 12 is pushing out this season. The former 4-star recruit looks to increase his draft stock in any way he can as this Covid shortened season rapidly approaches.

– Long frame that gives him a large catch radius
– Good tracking ability while the ball is in the air
– Strong hands that he uses to pluck the ball from the air
– Smart with how he receives the ball and is not afraid to use his body to occasionally ensure a catch in traffic rather than allow DBs to make a play by attacking his hands
– Good body control that he can use to remain in bounds along the sideline
– True jump ball ability. Can go up and get the ball in areas DBs can’t defend
– Gets his separation via size/length and leaping/post-up ability
– High motor and willing to block in the run game

– RAC ability is merely sufficient and is not a true threat to defenses
– Occasionally struggles when collided with along his route or at his release by more physical DBs
– Needs to improve stems and use them more often while running routes
– Physicality from DBs at the catch point can throw him off, but he flashes outstanding ability to make contested grabs
– Does not possess breakaway speed which limits both the variety of ways he can get open and how effective he is after the catch
– Route tree does not contain much in the form of short routes
– Lateral agility is sufficient but does not stand out when compared to other receivers or DBs
– Not going to be a contributor in the run game outside of blocking and needs to improve blocking form

Vasher has some tools that can make him a useful asset at the NFL level. His ability to go up and get balls where they simply can’t be defended is his greatest weapon, and his propensity to make highlight reel catches by using his body control, hands, and length in conjunction with each other can only help him in the eyes of front offices. He does not fit the mold of a classic slot receiver well, and is best as an outside receiver where he can be matched up one-on-one on deep and medium routes. Teams that find themselves lacking a big-bodied red zone threat in the receiver room could look at him as an intriguing option on Day 3.

Vasher’s primary concern will be to remain on the field and not have any off-field issues or injuries. He missed games in 2019 due to suspension, and has been held out of practice in the early days of 2020 due to academic issues. On the field, becoming a more physical receiver and constantly displaying his ability to make contested grabs rather than doing so occasionally will be the main thing to watch.  Improving his speed and lateral ability will help him diversify both his route tree and his methods of gaining separation, as well as how much of a threat he is after the catch. He has some tools that scream Day 2 upside, but inconsistency and staying on the field will be the main concern that he must work to alleviate if he wants to make it out of Day 3 or the priority free agent pool.