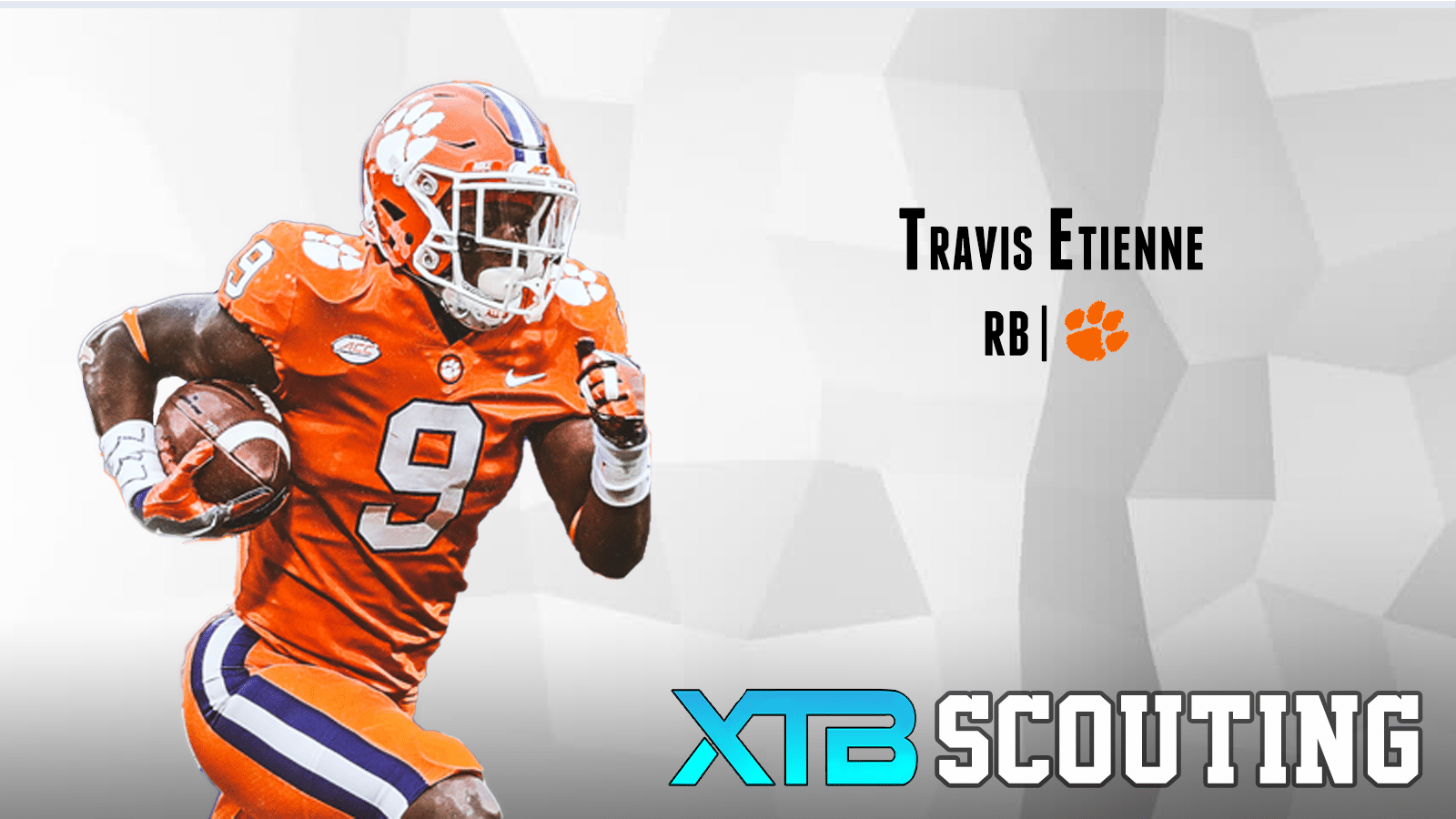 Shows a good ability to press the hole on zone runs and will make LBs commit before bursting towards daylight, especially on outside zone. On power runs, he patiently follows his blockers and has the body control to get skinny through tight windows. His vision on screens and in the open field is an asset, as he quickly makes decisions on the fly. He can struggle to identify cutback lanes on both inside and outside zone plays, especially when there is DL penetration into the backfield. He also struggles to create something out of nothing when the play breaks down.

One area that immediately stands out on film is Etienne’s burst. Once he finds a crease in the defense, he explodes forward, churning his legs to quickly reach his high-end top speed. He has very good lateral burst as well to reach the perimeter or change direction in space.

Good contact balance allows him to stay upright and churn his legs through tackles. He uses his body control to spin off tacklers and maintain forward momentum. And he displays very good change of direction ability to make even DBs miss in space. Though he can be hesitant when facing a defender in the hole, he is generally willing to put his head down to gain extra yardage when space is unavailable and fights to extend in clutch situations.

An asset in the passing game, Etienne has solid, natural hands and can adjust well to the ball in the air. He was mainly utilized as a safety valve and in the screen game, thriving in both roles. After the catch, he transitions smoothly from receiver to runner and explodes up the field, showing good open field vision and lateral agility to be a home run threat.

One area where Etienne tends to struggle is as a pass blocker. He often puts his head down to brace for contact from blitzing LBs or other defenders, limiting his ability to shuffle his feet to match the defender. His high pad level as a pass blocker does not allow him to sustain blocks and he can be late to react to blitzes.

Etienne has the speed, front-side vision, and elusiveness to thrive in a zone running scheme that heavily features outside zone. He will be an asset in the screen game, where his smooth transitioning and explosive burst after the catch will allow him to be successful. His YAC ability is better than expected for a slender back, and he fights to gain extra yardage. He may struggle as a pass blocker and fail to identify cutback lanes when facing DL penetration. Generally, Etienne is a prototypical RB for today’s NFL.

Can he improve his toughness as a pass blocker? Though somewhat discounted in modern offenses, improvement in this area would go a long way towards cementing his status as a legitimate three down player.

With recent draft trends, it is unlikely any running backs will be taken in the 1st round. Look for Etienne to be one of the top RBs taken in the beginning of the 2nd round.