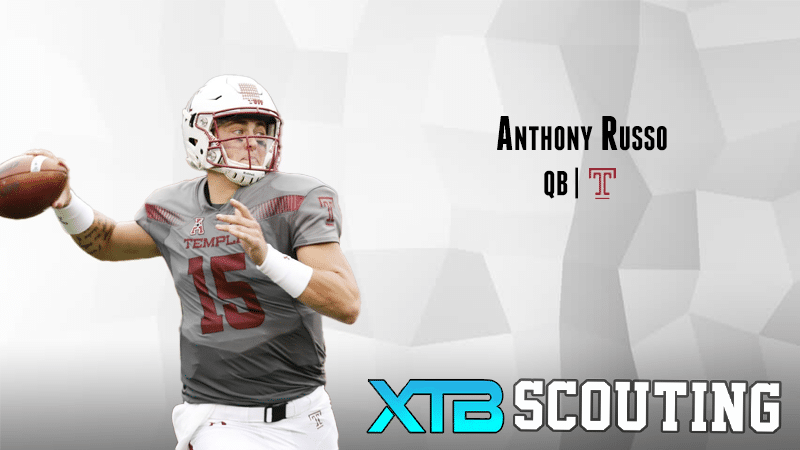 Anthony Russo is an old school quarterback who operates strictly within the pocket in the Temple offense. After being plugged into the starting role as a redshirt sophomore in 2018, Russo took the reins for the Owls quarterback job. He’s built for the position and can endure the damage of a pocket onslaught, but does not play with ideal accuracy or processing speed for an NFL quarterback. Russo’s best fit will be with an offense that lets him hit body shots in the short and intermediate areas of the field, particularly in the middle of the field. The full field will become more available to him if he improves his ball placement and ability to deliver into his receiver’s leverage.

– Has an adequate sense of pressure in the pocket, and won’t go blind to backside breakthrough
– Totes a rock solid frame that allows him to eat arm tackles and shimmy his way through contact inside of the pocket
– Puts faith in his arm and won’t back away from attempting tough throws over the middle of the field and over the top of the linebackers
– Still developing a sense of touch, and it flashes on the deep ball arc
– Will occasionally work through his progressions and find secondary and tertiary options
– Toughness is evident in the way he handles contact, and he isn’t going to back down to any big hits

– Mechanically clunky thrower who can affect his own ball placement with unnatural and hinged motions
– Stares holes through his target and tips off defenders prior to the start of his arm action
– Doesn’t have the athleticism to make many plays as a runner, and will need to win within the defined boundaries of the pocket
– Accuracy is average at best, and it takes away a lot of his opportunities when going down the field
– Arm strength doesn’t match up with the body type, as it’s only adequate for a quarterback prospect
– Needs to speed up his process more often when under pressure

Russo projects as a developmental backup or third string quarterback who can be brought on as a priority free agent or late round selection. The cupboard isn’t bare for him in terms of growth potential, and with some tweaks to his game he could earn himself an invite to one of the premier all-star games after the season. Overall, Russo is a quality college quarterback who may never start games in the league, but could become a low end contributor as part of the 53-man roster.

The departure of reliable targets Isaiah Wright and Kenny Yeboah may put a damper on Russo’s statistical output for his senior year, but he should be able to post modest results both in the wins column and in the stat sheet. It’s unlikely that Russo outperforms his past two seasons, but he’ll have an opportunity to cement himself as one of the better late day three senior quarterbacks in a class that doesn’t have many surefire bets in that group. If he can improve his ball placement and clean up his mechanics, he could build up some more interest as a prospect in his final year.