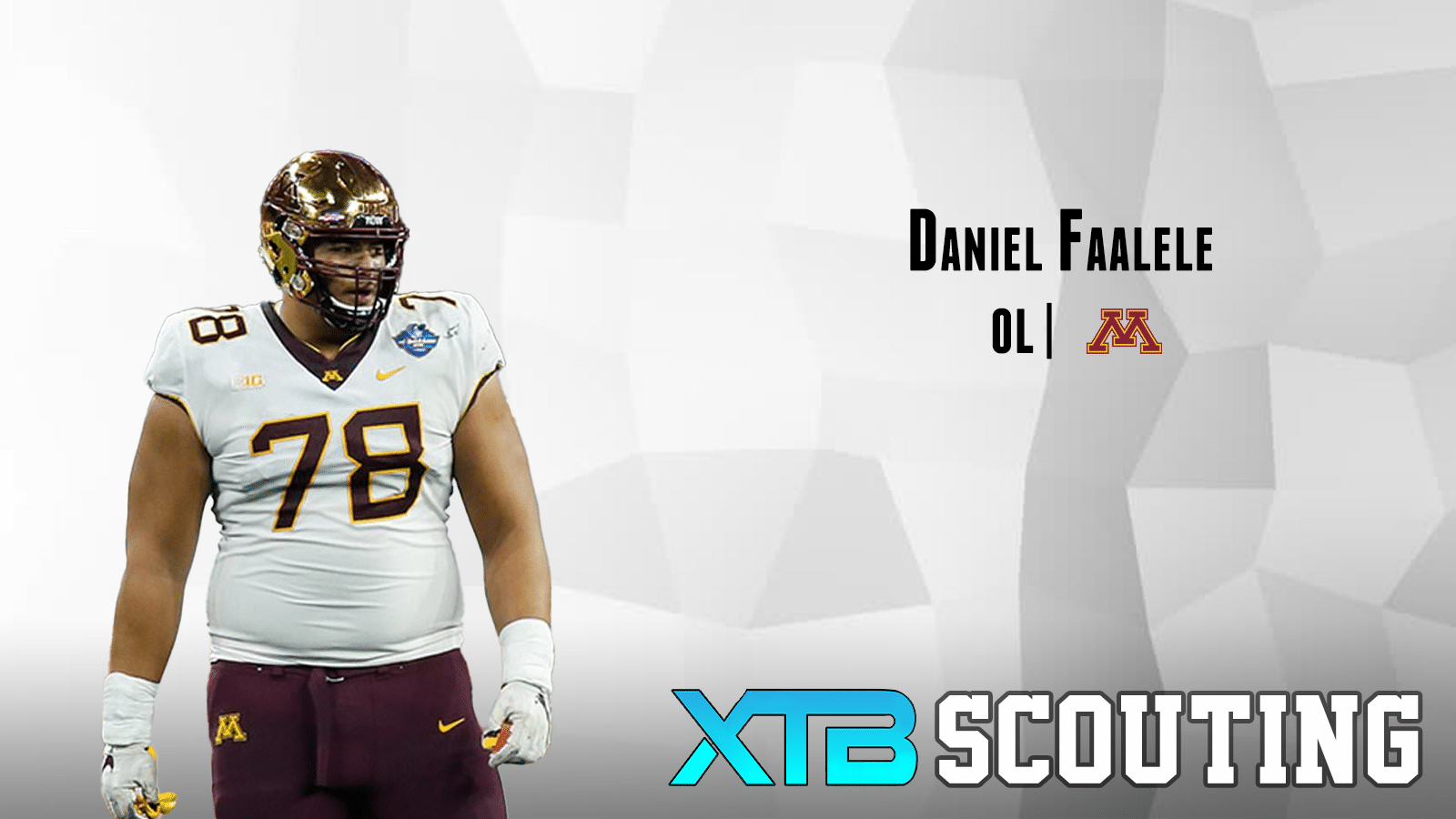 Daniel Faalele came to Minnesota as a 4-star recruit from the IMG Academy where he was introduced to football after playing rugby and basketball in his home country of Australia. The Aussie earned a starting spot six games into his freshman season and has been a mainstay at right tackle in Minneapolis ever since. The Gophers use a zone-heavy running scheme with a lot of play-action and short to intermediate passes. Faalele has been very successful in this system due to his extremely impressive play strength and good use of hands in pass protection.

– Elite/rare size and he carries his 400-pound frame well with little bad weight
– Primarily uses jump and 45-degree sets with good initial quickness and angles to cut off defensive linemen
– Has good timing with his hands, throws fake punches and mixes up when he throws it to keep pass rushers off balance
– Elite play strength in pass pro to stop defensive end’s momentum and very long arms to create separation
– Takes flat angles on down blocks and has elite play strength to move defensive ends from his outside shoulder to head up or inside, allowing him to wash defensive linemen down
– Can control defenders with his hands on base blocks and get a good push once he gets his feet underneath him
– When working up to the second level, he uses efficient angles with good acceleration and can finish blocks with linebackers on the ground
– High-end grip strength allows him to stay engaged on all blocks

– Lacks the foot speed when asked to use vertical sets, making him susceptible to getting beat with speed around the edge
– A habit of leaning with his waist when he punches, which pass rushers who have good use of hands can take advantage of
– Adequate COD when engaged in pass pro to stay in front against inside counter moves
– Doesn’t sink his hips well to anchor against pass rushers who excel at turning speed to power
– On all run blocks, he has merely adequate physicality at the point of attack, timing with his hands, and knee bend, mostly relying on his size and strength and doing a lot of catching as a result
– Lacks the hip mobility and agility to secure the edge when reaching five- and six-techniques
– Has wide hand placement on base blocks towards the outside of the shoulder, toeing the line of holding

Faalele projects as a late-first to mid-second round pick quite frankly because guys like him just don’t grow on trees. His elite size and strength are something that any offensive line coach will be more than happy to work with, and he has only played football for three years so there’s plenty of reason to believe the Aussie has a ton of upside. Teams that use a lot of inside zone and gap runs with a short to intermediate passing scheme would be a good fit for Faalele. The combine could be good for his draft stock as Bruce Feldman reports he has a 29-inch vertical and 8-foot, 7-inch broad jump, at 400 pounds.

Unfortunately, it’s a real possibility we don’t get to see Faalele play in 2020. That would be a shame because he needs to improve on his vertical sets to become a top tackle in this draft class. Shedding a few pounds would be in the Gopher’s best interests to add some foot quickness, even if it comes with a little loss of strength.