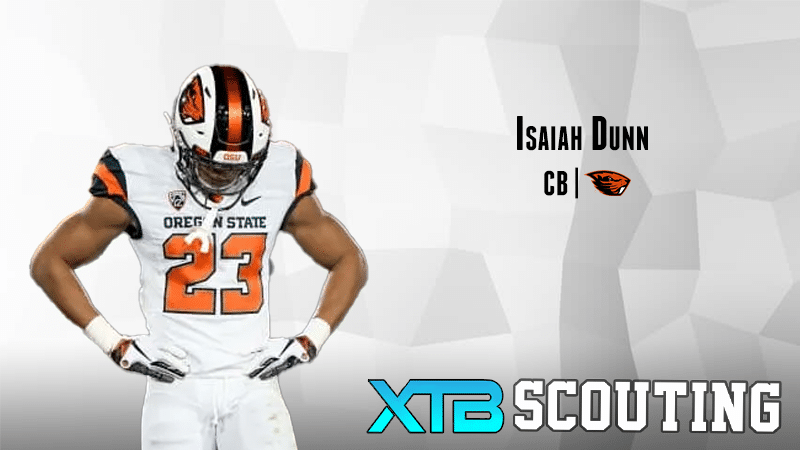 Isaiah Dunn is a starting CB for Oregon State who has played in a total of 26 games for the Beavers, while earning 22 starts. He primarily plays in press-man coverages on the outside in a 3-4 defensive scheme. However, he has played in off-man and zone coverage, as well as a variety of other defensive schemes. At this point in his collegiate career he has yet to record an interception, but his productivity at the catch point (15 pass breakups) and overall (102 total tackles) make up for the missing INTs.

– Not intimidated by receivers and will not hesitate to get physical and jam them at the line of scrimmage
– Uses his peripheral vision to keep his eyes on the QB in zone coverage while keeping his responsibility in sight as well
– Possesses a high football IQ, and uses it to recognize routes and time his pass breakups well
– Communicates consistently with his teammates pre-snap
– Quickly flips his hips to get in phase on pass plays
– Has played in a multitude of defensive schemes
– Easily disengages from stalk blocks of wide receivers, and can hold his own against tight ends and offensive linemen
– Maintains a good athletic stance. He does not get knocked off balance easily and does not trip over his own feet
– In zone coverage, Dunn is able to patrol his zone(s) effectively while disrupting routes of receivers and passing them off to the next zone
– Consistently displays effort and does not give up on plays

– Has difficulty sinking his hips to change direction in the pass game
– Struggles to match receivers step for step and mirror their moves in coverage
– Dunn’s tackling ability needs to be cleaned up. He lunges at ball carriers frequently rather than squaring his shoulders and properly wrapping up
– Gets beat on inside moves by receivers
– Occasionally gets distracted and will lose sight of his assignment. Struggles to remain focused when asked to multitask
– Not asked to blitz

At the next level, Dunn would best fit as an outside CB in primarily a man-to-man defensive scheme. He possesses the physicality to match up with tight ends lined up in the slot, however his instincts and knowledge of the intricacies of the game will suit him well on the outside. Although he shows promise, if he cannot improve his tackling technique, teams will remain wary about selecting him during the draft process. It can be expected that Dunn will be drafted somewhere from mid-late on Day 3. He will most likely be a dependable backup CB during his first couple years in the NFL, with the potential ceiling to become a consistent starter.

Can Dunn buckle down on his tackling ability? Lunging at ball carriers rather than squaring his shoulders will not be sufficient enough at the NFL level, and in turn will cost him playing time. Will he be able to improve his discipline in zone coverage? Dunn does a good job at keeping his eyes on the QB in zone, but sometimes he focuses too much on the QB and loses track of his coverage responsibility. He needs to learn to use his peripheral vision and multitask to keep an eye on both his receiver and the QB. 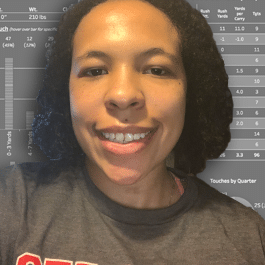