Kevin Mensah has good quick-twitch athletic ability with the lateral agility and body control to pick his way through traffic, balance to bounce or spin off defenders, and quickness in space.

A patient runner, Mensah shows good vision on both zone and power runs and can identify gaps well on both inside and outside runs. He patiently allows blocks to set up before running to daylight and has the lateral agility and change of direction ability to cut well when backside lanes open. His quick feet allow him to navigate traffic well and pick through trash to gain maximum yardage, often making positive yardage out of difficult situations. Once he identifies a hole, he shows good burst to accelerate with long strides into the 2nd level and has good lateral burst to get wide on sweep or stretch plays. He shows good long speed in the open field as well.

Impressive contact balance for his size, constantly churning his legs and fighting for extra yardage. Does not show the best open field change of direction ability to make defenders miss, but his hard running style allows him to bounce and spin off would-be tacklers. Even when surrounded by defenders, he shows an uncanny knack for finding space to fall forward, especially in clutch situations.

One area where Mensah has yet to prove himself is the passing game. Last season he was not utilized very much in the passing game, often subbed out in obvious passing situations and only recorded 8 catches for the entire season. While he showed willingness as a pass blocker when asked to do so, his small stature limited his ability to anchor vs LBs and he seemed uncomfortable blocking overall. In his limited catches, he did show a good ability to transition quickly from runner to receiver and had good upfield burst after the catch. Unfortunately, he was often held up or bumped off his route by LB jams when running routes past the line of scrimmage.

Mensah is a tough, competitive RB who wins with patient vision, quick burst, and contact balance. He would fit best in a zone-based scheme due to his patience and vision, but could function in a gap scheme as well. His combination of traits make him an intriguing prospect at the next level, but his lack of impact in the passing game will ultimately limit his value. He can be useful as a situational change of pace back in non-passing situations, but this very specific role and the increasing emphasis in the passing game do not bode well for his draft stock.

Due to his lack of size and passing game ability, Mensah is hard to project above a mid-Day 3 pick. Look for him to go in the 6th to early 7th round.

With UConn football recently cancelling their football season, all-star games such as the Senior Bowl or College Gridiron Showcase will be very important for Mensah’s draft stock. If he can show an improvement as a pass catcher in these events, it will help paint him as a more complete RB prospect. 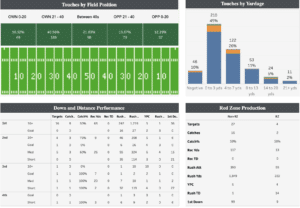