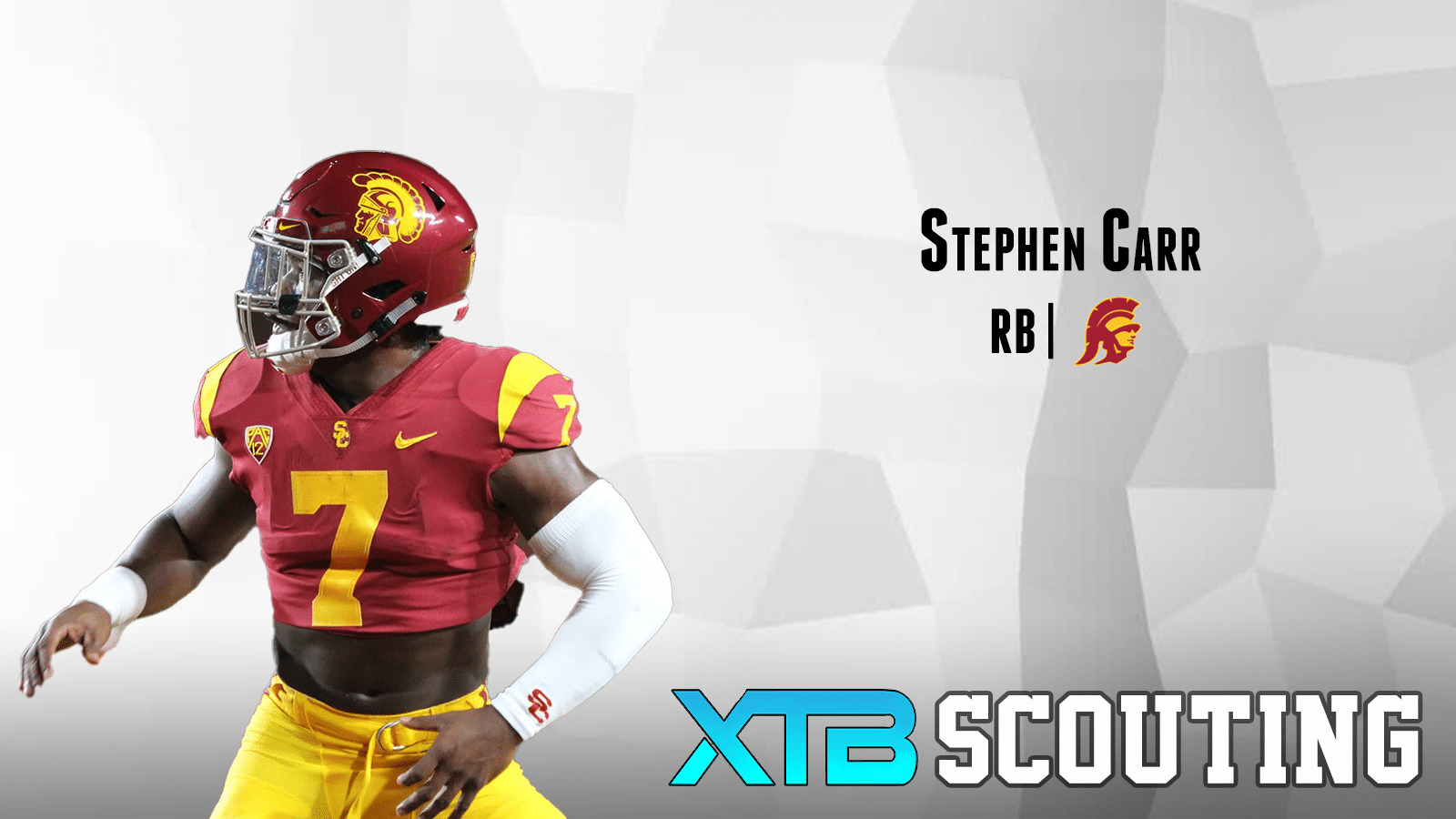 Stephen Carr came to USC as a 5-star prospect and quickly secured a rotation role behind Ronal Jones II, earning All-Pac-12 honorable mention in his collegiate debut season. Having not played a full season his first two years due to injury, he split time with Vavae Malepeai and Kenan Christon in 2019. Despite the coordinator change from 2018 to 2019, USC’s running scheme was about the same with a mixture of inside and outside zone and power/counter runs from shotgun.

– Reliable hands when receiving. Flashes quickness on cuts to separate from some linebackers
– Solid vision, fairly consistent in hitting cutback lanes when primary hole covered on zone runs
– Solid elusiveness in the open field. Able to set up defender before cutting towards his pursuit angle
– Shows adequate balance and strength allowing for extra yards after first contact. Determined to not get brought down easily and consistently falls forward
– Brings kick return value. Averaged 21.4 yards in college. Career best was in 2018 averaging 25.2 yard per return
– In pass protection, recognizes incoming pressure and is a willing blocker overall in pass pro and in the open field. Did see improvement with his base later in 2019
– Burst through hole. Easily gets to second and third level when lane is clear
– Improved ball security. One fumble out of his 155 touches in 2018 and 2019 after having three fumbles in 2017

– Protecting the ball when approaching contested situations and tightening the ball more from behind
– Relies too much on jukes, and would be beneficial if he could string more moves together and utilize his free hand more
– Average long speed. Didn’t show acceleration to break the third the level and is often caught from behind
– Didn’t showcase his route running ability from outside the formation, as most of his receptions came from backfield through swings, screens and outs.
– Hand usage when in pass protection. Consistently leans to target with shoulders to catch defenders rather than block them. Also must continue to strengthen his base for NFL competition
– Must be more aware of box defenders’ location once he gets the handoff as he sometimes misses the open hole. Can improve on pressing the hole to suck in 2nd level defenders and refuses to hit tight enclosures
– Unluckily hit with injury bug throughout collegiate career. Not playing a full season in first three years

Carr best fits in a zone scheme that also gives him touches in the passing game. His pass protection ability still needs some work technique-wise, but he is capable of understanding his assignment. Carr will most likely start out as a third running back, contributing in special teams while getting slowly acclimated into the passing game. Unfortunately, lower body injuries throughout college could set him back to be a late Day 3 selection or PFA.

Carr lacks high-end play speed, so it is important for him to showcase more ways to avoid/break tackles at the second and third level. He will also need to get better at finding the open hole and manipulate 2nd level defenders, and it would help if he could get through the 2020 season without any ailments. At the next level, Carr will need to improve and strengthen his base as well as not just blocking with his shoulders. While it’s likely out of his control, it would be nice to see if Car’s receiving role would expand.