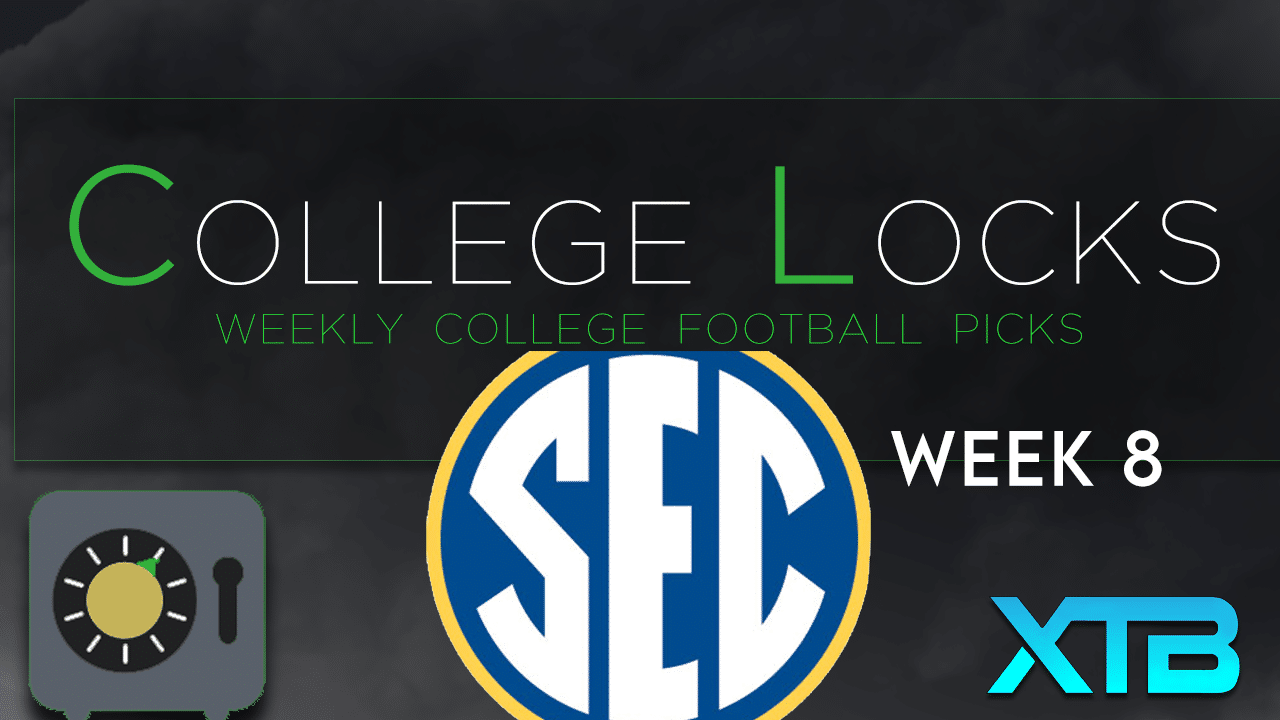 Posted at 10:44h in Betting by Jeremy Morris
0 Likes
Share

After weeks of making picks off a limited SEC schedule, I have had this weekend and its full seven-game slate circled on my calendar for weeks. That fell apart pretty quickly, as four games were postponed — three till December 14 and the fourth, LSU versus Alabama, still up in the air since LSU is already playing Florida the weekend of the 14th.

If games continue to be postponed, the SEC will most likely have to push championship weekend back to extend the season.

If not, it would be a merciful ending to a forgettable season for LSU. Either way, the last four weeks of the SEC schedule are absolutely loaded and December 14 is shaping up to be one of the best weekends of the season (assuming the rest of the season goes somewhat smoothly; seems unlikely but fingers crossed).

Between the shortened season, the fact that we skipped most of the pre-season buildup, and the Big Ten essentially being over, it feels like this college football season has flown by. In an effort to preserve and savor this season as much as possible, I made six picks this week — the spread and the point totals for all three games below.

COVID-19 has hit Vanderbilt harder than any team in the SEC (so far), forcing the program to shut down and practices to be canceled during pre-season camp and again in October. Only one game has been postponed so far, but with one-third of the roster unavailable for stretches of the season, Vanderbilt has had to prepare and play with a severely depleted roster all season.

Only 56 scholarship players (out of the full 85) played against South Carolina and 58 against Mississippi State.

In spite of the terrible hand Derek Mason and his team have been dealt (on top of the inherent disadvantage of just being Vanderbilt), they have somehow managed to improve over the course of the season. True freshman quarterback Ken Seals was named the starter entering the season. After struggling early in the season, Seals has thrown for 300-plus yards and completed 70% of his passes over his last two starts.

Seals may have also thrown three interceptions and coughed up a 4th quarter fumble in a one-score loss to Mississippi State last week. Glass (or stadium) half-full — down 27 scholarship players with a true freshman at quarterback, Vanderbilt was in a position to win or lose a game in the fourth quarter.

This team might be 0-5, but they are moving in the right direction and I would not be shocked if they finished the season with at least one win. It just will not be this weekend.

Vanderbilt has no running game to speak of, and before Seals’ two 300-yard games the last two weeks, the offense really had no passing game to speak of. Kentucky has the top-ranked pass defense in the SEC (allowing only 212 yards/game) and is second in the conference in interceptions (1.8/game).

When Kentucky has the ball, they will face one of the worst defensive fronts in the SEC. Through five games, Vandy has given up an average of 161 rush yards/game. Much more concerning is the fact that they are allowing 5.3 yards/rush for the season. Kentucky runs the ball more than any team in the conference.

Kentucky quarterback Terry Wilson is expected to return from a wrist injury this week, meaning offensive coordinator Eddie Gran will have all three pieces of his three-headed rushing attack (running back duo of Chris Rodriguez and Asim Rose being the others) for the first time since October 17 against Tennessee.

For the second time in 2020, South Carolina finds themselves two games under .500, riding a two-game losing streak, trying to salvage their season and likely their coach’s job.

In October with their backs against the wall after an 0-2 start, Will Muschamp‘s Gamecocks blew the dores (pun intended) off of Vanderbilt then upset 14th-ranked Auburn. They appeared to have righted the ship momentarily before a pair of embarrassing losses to LSU and Texas A&M brought us to here, the same place they were after Week 2, only much deeper in the hole.

In their last two games, South Carolina has been outscored 73 points, outgained by 519 yards, and dominated in every aspect of the game, particularly against Texas A&M.

Hoping to give his team a spark on offense, Muschamp has had an open quarterback competition, giving sophomore Ryan Helinksi (58.1% for 2,357 yards, 11 touchdowns in 11 games last year) and athletic freshman Luke Doty an opportunity to compete with redshirt senior Colin Hill (58.8% for 1,142 yards, five touchdowns/five interceptions in six starts).

No matter who Muschamp and OC Mike Bobo tap as the starter, the offense as a whole should improve dramatically this week against an Ole Miss defense that ranks last in the SEC in scoring defense (allowing 40.7/games), run defense (231 yards/game), and total defense (533.5 yards/game). South Carolina has been marginally better defensively, allowing 33 points (10th in SEC) and 423.5 yards/game (11th).

Sophomore quarterback Matt Corral (71.7% for 1,846 yards, 18 touchdowns, nine interceptions) has been on a tear this season and will probably continue it against South Carolina on Saturday. The only thing that has slowed Corral and the Ole Miss offense down this season has been self-inflicted mistakes and turnovers.

South Carolina will score some points, but between the uncertainty at quarterback and lack of playmakers at receiver outside of Shi Smith (43 receptions, 479 yards, five touchdowns), this team is ill-equipped for a shootout. The strength of Mike Bobo’s offense is the ground game — feeding Kevin Harris (106 carries, 574 yards, eight touchdowns, 5.4 ypc), controlling the clock, and setting up the play-action and RPO games.

Auburn outgained South Carolina by more than 180 yards and was better in almost every phase of the game. The Gamecocks had the advantage in two areas — time of Possession and turnovers (thanks to Bo Nix). South Carolina has more talent, more experience, a bigger more physical offensive line, and Muschamp and his staff have the blueprint to win. It is just a matter of which South Carolina team shows up.

Several Gamecock players spoke out in support of Will Muschamp this week, including tight end Nick Muse who said he would take a bullet for his coach. With their coach’s job on the line, I think this team shows up ready to play and takes care of business in Oxford.

In six games under Sam Pittman, Arkansas has more wins than last season and more SEC wins than the last three seasons combined under Chad Morris and Bret Beilema. With practically the same roster, 2020 has been markedly better than last season in every major statistical category on both sides of the ball.

But beyond anything that might show up on the stat sheet, this team plays with grit, passion, pride, intensity, composure, and they expect to win. That is what Sam Pittman has done for this program.

In year one of the Pittman era, no one has been more vital to establishing a winning culture within the program or winning games than Feleipe Franks. He arrived as a grad transfer in January, not long after Pittman, and has flourished under offensive coordinator Kendal Bryles, completing 67.2% for 1,428 yards, 14 touchdowns, and only three interceptions through six games.

In three seasons at Florida, Franks played in 27 games, threw for over 4,500 yards, and led the Gators to a 10-win season in 2018. But nothing from his three-year career in Gainesville comes close to the way Franks has played in 2020. His last four games this season have been the four best games of his career.

Over that span, he is completing 70.5% of his throws and averaging 254 yards/game with 11 touchdowns and only one interception.

He is hoping to continue his run of stellar play as he returns to the Swamp to face his former teammates and coaches. Unfortunately, his head coach will not be with him after a positive COVID test this week. Arkansas is in good hands with first-year defensive coordinator (and former Missouri head coach) Barry Odom acting as interim head coach in Pittman’s absence.

Coming off a massive win over Georgia last weekend (Dan Mullen’s first win in Jacksonville), Florida is in the driver’s seat on the road to Atlanta to play for the SEC title and likely a playoff spot. This week they could be without the nation’s top tight end and one of the most dangerous players in college football.

Kyle Pitts is still recovering from a concussion sustained in the second quarter of last week’s game with Georgia and has been listed as questionable.

I do not see Florida losing this game, but coming off a huge win, playing an underdog who has more reason to care, likely missing a key player — this has all the ingredients of an upset or at least a closer game than most expect (i.e. an easy cover). Arkansas is 6-0 against the spread and they have only been outscored in the second half once this season (against Georgia Week 1).