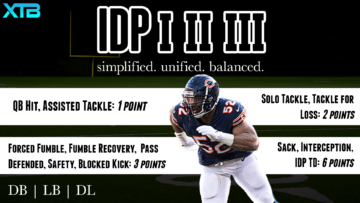 IDP 123 came into existence entirely as a means to overcome some of these hurdles and break down barriers. To give casual fans a quick and smooth transition into a side of the ball they may be less familiar with. IDP 123 solves problems with a pragmatic and educational approach. It takes the conventional IDP fantasy football learning curve and cuts it in half. Empowering new players to join, create, and compete in an IDP fantasy football league with confidence.

When you join a fantasy football league without IDP players you learn one easy scoring system. Usually, 4 positions are represented on the offensive side (QB/RB/WR/TE). All players are awarded the same value for the same actions. If a player catches a 10-yard touchdown, no matter his designation from running back to quarterback to tight end to the wide receiver he will score whatever every other player would have scored. The same is said for throwing a touchdown. No matter what designation you carry an action holds the same weight across all positions within current PPR formats. Premiums are given in some leagues, but these are ALWAYS the exception. Not the rule.

When you join (most) IDP fantasy football leagues though, you’re expected to learn 5 positions (DT/DE/LB/CB/S). The workload for team management on defense is instantly made larger than the offense by one position. But it gets worse. You’re also almost always expected to learn FIVE SEPARATE SCORING SYSTEMS. One for each of the 5 “true positions” on the defense. That’s a big ask and a huge barrier of entry and one that needs to change.

This unique scoring rubric for each position will cover a multitude of actions most new or casual NFL football fans have likely never paid attention to. For instance, assisted tackles or quarterback hits. And each of these new actions will carry a different weight by position, making the learning curve exponentially steeper than offense. Five new positions, five new scoring systems (5×5=25). The audacity of this ask for new players is why there are so few IDP fantasy players and why many people never even give it a try. It’s just a lot more work and the learning curve is massive.

The IDP 123 scoring format you’re about to learn about in detail is an attempt to begin establishing a unified and standardized scoring system for all positions within the realm of IDP fantasy football and alleviate some of these issues. It is also an attempt to begin changing the semantics around certain positional designations within IDP fantasy football and help make the defensive side of the ball become more fun and entertaining.

Let’s start by establishing the events on defense that will be scoring plays.

Now for the scoring values.

Simplicity was a major catalyst for this system. Could you give an elevator pitch explaining your current IDP scoring system? With IDP 123 you can. It’s a scoring system that gives defensive players the recognition they deserve for all the actions they’re performing on the field. Not a bland tackle based scoring format. It’s purposefully designed around the mantra IDP, easy as 1,2,3. Most of the points you will score will come in those three values. It’s that easy and that simple.

The 1,2,3 is also a nod to simplified positions. In IDP 123 scoring instead of 5 “true” IDP positions, 3 IDP positions are used. Defensive tackle (DT) and defensive end (DE) are combined into a single position called defensive line (DL). The same strategy is applied to the cornerback (CB) and safeties (S). Those two positions are combined into a single defensive back (DB) positions. Now instead of looking at IDP as a five-position format, new players can view the defense as a three-level scheme. The (front) defensive line, the (middle) linebackers, and the (back) defensive backs. IDP, easy as 1,2,3.

As mentioned above most IDP fantasy football leagues have a unique scoring rubric for each of the positions. In IDP 123 the scoring is unified across all positions. There is only one scoring rubric to learn and no position is rewarded more for action on field than their contemporaries. While this might inherently increase the value of some positions over others, the same is true on the offensive side of the ball. With an established, unified scoring system like IDP 123 player values and trends can start to be realized, instead of inflated or diluted.

One of the common complaints about IDP fantasy football new players often express is the inability to know how to value defensive players in trades. With a unified scoring system where values are allowed to be realized across multiple positions quickly and easily, this complaint is also somewhat alleviated. IDP 123 does this particularly well because along with being unified, it’s also balanced.

Does it also translate to a similar season-long upside? Let’s take a look at the top finishers at each position from 2019 in PPR and IDP 123 formats.

Christian McCaffrey kind of skews the results. The second-highest scoring running back in 2019 had 298 PPR points (Aaron Jones). As you can see most of the top-end scores on offense ranged from 248 to 448. All of the top finishers on the defensive side finished almost perfectly between. So the season-long upside of offensive and defensive players is in fact balanced with the value of top-end offensive players.

As you can see above there are plays on the defense that score over the 1,2,3 threshold. These are considered the touchdowns of the defensive. Big plays that make a big difference. Sacks, interceptions, and IDP touchdowns are all rewarded the same as an offensive touchdown, 6 points. A fun variation would also include Safety and Blocked Kicks as 6 point plays.

Other metrics that can be included in IDP 123 scoring are interception return yards, fumble return yards, and sack yards. Not all platforms for fantasy football offer these for IDP scoring, but if they do it’s encouraged that they are included. The yardage element is a very important differentiator on the offensive side but can only be included in minimal spots on defense, and should be where it can be. The same value for these yards is applied as the offense, (0.10 per yard).

If you made it this far you’re either already in an IDP fantasy football league or very seriously considering joining one. You definitely should and you should give serious thought to adopting the scoring format presented here. IDP 123 is for everyone. Not just the extremes or the die-hards. It’s an invitation to play the WHOLE game of fantasy football. Because if you’re not playing IDP fantasy football, you truly are only playing half the game.

The IDP 411 podcast is a great resource for newcomers to IDP fantasy football and utilizes the IDP 123 scoring format as the frame of reference for all commentary and analysis. Be sure to check them out here on the site and subscribe for IDP fantasy football content year-round.

Don’t forget to subscribe to Expand The Boxscore to access our advanced NFL statistics, including the IDP Leaderboard, which helps you easily sort through players to filter who you should be targeting for your rosters.