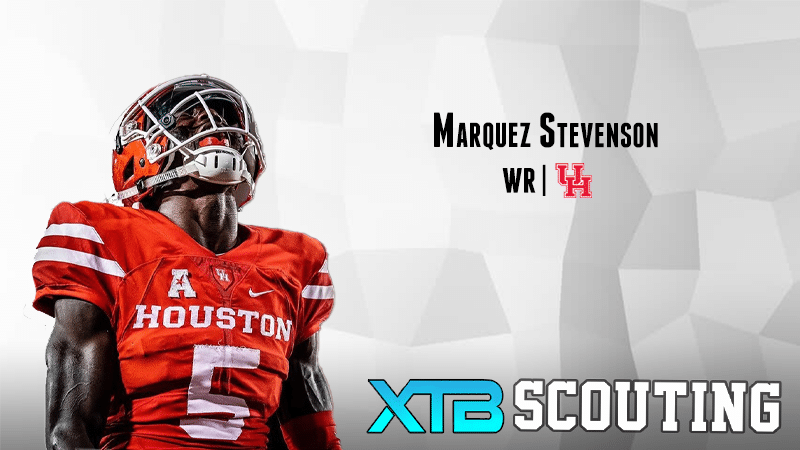 Marquez Stevenson came to Houston in 2016 and saw little game time until 2018 due to a flurry of major injuries. He would return for his redshirt sophomore and junior season to put up big numbers and lead the Cougars offense as their top receiver. Houston utilized Stevenson all over the field as a returner, a runner, outside the numbers as well as in the slot. He will feature once again for them in their notorious air raid offense under Dana Holgorsen.

– Has the play speed, change of direction and agility to be an effective route runner and threat in open space after the catch
– Tracks and adjusts to the ball well deep
– Demonstrates very good body control
– Obvious threat on offense. Able to beat the defense deep, short on screens or on designed runs
– Release is above average due to incredibly quick first step
– Able to easily create space with athleticism
– Threat on special teams due to ability with the ball in his hands

– Route tree is limited and lacks the technique to run crisp and precise routes
– Easily gets overpowered and misdirected at the LOS and in traffic
– Hands are not always reliable. Struggles with concentration drops and passes on traffic, extreme body catcher
– Looks uninterested when not directly involved in play, typically as a blocker

Stevenson looks to find his place among this insanely talented crop of receivers. As of now he fits best early on Day 3 due to the depth of this class. His role at the next level is limited to a receiver off the bench for a team that runs a heavy vertical offense as well as being a core special teamer and gadget player here and there. With improved technical aspects of his game his stock could rise to a late Day 2.

Stevenson is an electric athlete who is damn near untouchable with the ball in his hands. As a receiver, he lacks a lot of the aspects that are necessary to play at the next level. There are three main things he needs to improve upon; his hands, his route running and his effort. One of those, his effort, is extremely easy to fix but as a route runner he is partly limited to his offense that does not ask him for much. As well as becoming a more crisp route runner, he needs to become more consistent catching the ball in traffic and in contested situations.