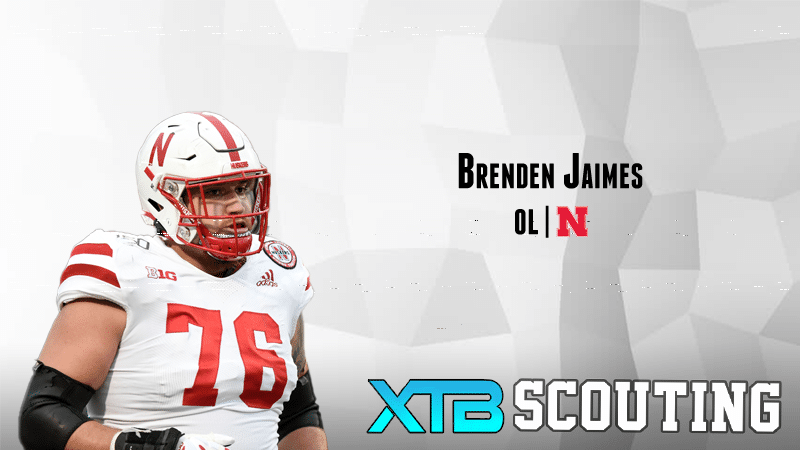 A 3-star prospect out of Lake Travis High School, Brenden Jaimes was ranked the third best offensive tackle from the state of Texas. Jaimes was thrown into the fire early, starting 9 games as a true freshman at right tackle in 2017, garnering All-Big Ten honorable mention recognition by the Big Ten Network for there All-Freshman team. He started all games at Left Tackle in the 2018 season helping the Nebraska offense average 456.2 total offensive yards per game ranked them 25th in the country, while also getting All-Big Ten honorable mention. Jaimes was a bright spot for the Huskers’ 5-7 2019 season being named Nebraska’s Offensive MVP, while starting all 12 games. In the run game, Nebraska ran mostly power blocking schemes with some inside and outside zone runs. In the passing game, Nebraska presented a quick passing offense, with a mixture of jump sets, vertical  and 45° sets, along with slide protections, from the offensive line.

Strengths of his Game:

– Good mirroring skills, showing quick and light feet to go along with his length and size.
– Keeps feet moving on kick outs and down blocks, widening the hole and stalemates vs stronger opponents. Stays hip-to-hip with teammates on combo blocks
– Shows a good base overall
– Uses his length to ride defenders out of the pocket if beaten outside
– Solid punch accuracy and shows good latch ability, steering and controls man. Able to counter with hands when first attempt misses or when hand fighting with edge rushers
– Shows quickness and mobility to get to target on 2nd level blocks and on reach blocks, and able to be used on pulls and space blocks.
– Recognizes stunts and able to combat them effectively, and consistently looks for work
– Solid upper body strength to turn and seal his man
– Pad level improved over the course of season
– On pass sets, is quick off the snap to cutoff his opponent

– Lower body strength on his anchor when handling bullrushes and other power moves
– Needs to get more width on his first step when executing reach blocks and needs to correct his footwork on pulls
– Finishing blocks, mostly ran cold
– Struggles vs defenders with quick hands and there is no jolt on his strikes. Doesn’t take advantage of his length to keep defenders off him.
– Struggles recovering on inside counter moves and handling speed
– When run blocking, has tendency to wrap and grab opponent
– Leads with shoulders often when engaging on blocks overall, and hardly bends at the knees
– Path to target on 2nd level blocks, gets too far

Jaimes projects as a backup tackle with high upside if he improves his punch timing and his anchor. The four year starter out of Nebraska could hear his name called in the middle of Day 3 of the draft due to his size, length and mobility, but concerns with his posture, anchor and use of hands could prevent him from getting called earlier. He best fits with a team that mostly runs a power blocking scheme in the run game and lights the air with a quick passing attack. Against very good edge rushers, he could benefit with help from chip blocks or with the presence of a tight end near him.

With the return of the Big Ten, Nebraska has their work cut out for them with a tough schedule in 2020. That is good news for Jaimes to further sharpen his technical skills and have a chance to raise his draft stock if he performs well against stout defenders. In the run game, he’ll need to show that he improved on his overall hand placement and improve his footwork on reach blocks to be considered scheme versatile. In the passing game, he’ll need to show that he worked on his knee bend, timing on his punch, and anchor.