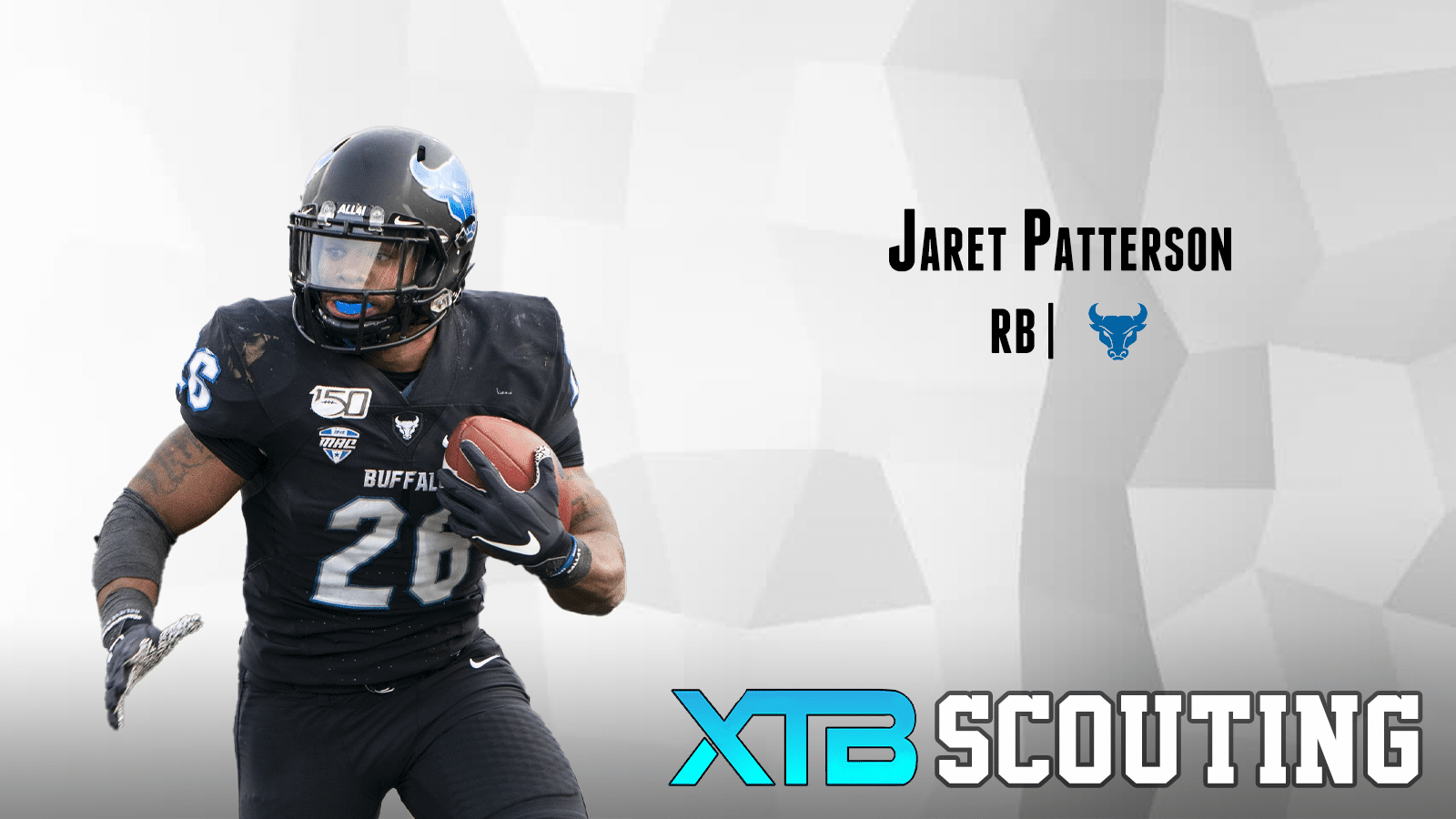 An elusive, scheme versatile running back with quick feet who must improve as a pass blocker

In 2019, Jaret Patterson led the Buffalo Bulls backfield as their leading offensive producer in their run-heavy offense. He broke multiple school records for game and season marks while sprinting his way to a 1,799 yard season accompanied by 19 rushing touchdowns. He was a playmaker in their mixture of zone and gap scheme running attack. He got his carries out of multiple formations including offset-gun, single back and various I-formations. His abilities ranged from being a one-cut runner, catching passing in the screen game, and as a blocker in pass protection.

– A very elusive player, Patterson shows off his quick feet by using jump cuts and jukes to navigate past defenders. His foot agility is quick enough to switch gaps to get the most out of every rush attempt
– Can contribute in multiple schemes. When running in zone schemed plays he showed the ability to find creases in the C and D gap. Was most effective in gap scheme plays due to the whole being determined pre-snap
– His vision after he gets through the hole is one of the best parts of his game. His ability to anticipate defenders allows him to make the necessary moves to gain extra yardage or break bigger runs
– Has shown that he can produce game in and game out. With consistent touches he is a reliable back that can wear down defenses
– Showed good run after catch ability when being used in the screen game. Hands are good enough to be useful as a check down option

– Struggles finding room up the middle on A and B gap runs. He is somewhat limited in his initial vision before crossing the line of scrimmage
– By no means is Patterson a slow back, but he is missing the home run hitting speed or acceleration that is sought after for a running back at the next level.
– He lacks some size, explosiveness, and power as a runner. Has shown some upper body strength when breaking tackles with his stiff arm but overall has a deficiency in power
– Hasn’t shown consistent form and physicality when pass blocking. Often whiffs or waits for the defender to engage first. With his smaller stature compared to most defenders, it’s difficult to pass protect without having an aggressive and technically sound approach
– Even though Patterson has shown quick feet, his start and stop ability is limited. When changing direction he takes too many choppy steps instead of being decisive and immediate.

Patterson is a solid running back prospect but he doesn’t necessarily dominate any particular trait compared to other backs in this draft class. For this reason his draft stock is valued at more of a Day 3 pick in the 2021 draft at this point. With the MAC not participating in the 2020 college football season, it would probably suite Patterson best to wait another year to declare. This would give him a chance to raise and solidify his stock with more film to study.

Since most teams won’t be playing college football this fall, it will be a very interesting couple months to say the least. We could see some key players on these types of teams transfer to conferences that still allow games to be played. Patterson could be one of these players but with him only being a junior it is probably unlikely due to his remaining eligibility and guaranteed starting spot. Look for him to use this “extended” offseason to either get ready for a legitimate spring season or sit tight till his senior year.