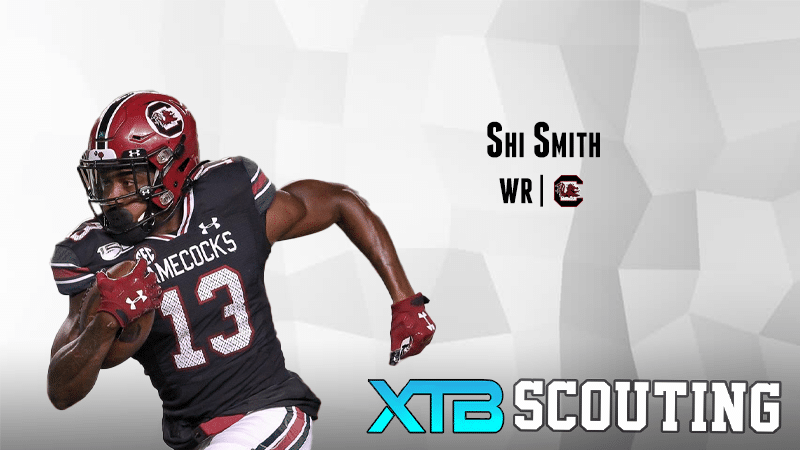 Shi Smith came to South Carolina as a 4-Star recruit, became a contributor right away and earned a full-time starting spot as a true sophomore. In 38 career games, he’s racked up 153 catches for 1,986 yards and 12 touchdowns primarily as a slot receiver for the Gamecocks. The Union native has the long speed to be a deep threat and some impressive agility and vision to be a threat after the catch. However, he lacks the play strength to defeat press coverage and has questionable change of direction to get in and out of his cuts on sharp routes.

– Quick to recognize blitzes and look for the ball as the hot receiver
– Attacks leverage to help create space when running in breaking routes
– Recognizes and sits in the holes against zone coverage and adjusts his path to create a bigger throwing window
– Doesn’t lose speed on his 45-degree cuts
– Has the long speed to create separation on streaks and drag routes
– Makes smooth and quick adjustments to back shoulder throws with very good timing to minimize the defensive back’s ability to make a play on the ball
– High points the ball in contested catch situations with a solid vertical to make up for some of his lack of height and can make highlight-reel grabs above his head
– Good physical toughness to bring the ball down through contact from defensive backs
– After the catch, reads blocks to find open lanes, impressive elusiveness to make defenders miss, runs through arm tackles and has nice contact balance to stay on his feet

– A consistent false step out of his stance reduces his explosiveness off the line of scrimmage
– Only works about one or two different releases off the line of scrimmage to defeat press coverage and lacks the play strength to get the corner’s hands off him, which continues into the five-yard window past the line of scrimmage
– Takes a while to get in and out of his 90-degree cuts even when using speed cuts, reducing his separation on sharp routes
– Has to slow down to make sharp turns, especially when executing double moves
– Doesn’t push vertical and snap the route off at the top when running slants
– Has a limited catch radius away from his body to the left and right, short arms and struggles to make catches the further the ball is from his frame
– Has trouble hauling in low and hard throws on short routes
– Fairly ineffective as a run blocker, not strong enough to stay in front of defensive backs and doesn’t exude a lot of effort
– Takes plays off when not involved, i.e. runs away or not included in the passing concept

In the NFL, Smith will be best as a slot receiver who can take the top off a defense and make some explosive plays after the catch. A team that uses a west-coast offensive philosophy and is looking for a vertical threat will be the best fit for him. As far as draft day goes, Smith is looking at a late-Day Three projection as a fifth- to seventh-round pick.

Can he be more effective against press coverage? The best way to neutralize speed receivers is to beat them up at the line of scrimmage and that’s Smith’s biggest weakness. Given his size, he’ll never be to just physically outmatch corners at the next level, but if the Gamecock can at least add a couple of effective and quick releases he’ll improve his draft stock.